Home to Greece at last

The procedures for travel to Ano Korakiana from Handsworth included a Passenger Location Form (PLF), a certificate of immunity in the form of a negative Rapid Lateral Flow Test for Lin at a shop in the Bullring, paid for, sent by email and printed out a day before departure, and, for me, an NHS certificate of AstraZeneca vaccinations, sent by post after an on-line application, on top of our Boarding Cards for Ryanair.

To these we added documents relevant to the ‘Withdrawal Agreement’ – beige residency cards obtained two years ago from the police station at Paleokastritsa, a letter, copied from a facebook page of advice to ‘British in Greece’, explaining that our passports should not be stamped with a date of arrival lest we be fined on departure for overstaying a time allowance for non-EU citizens visiting Corfu. These small hurdles nibbled at my enjoyment of the approach to a familiar journey – not a ‘holiday’, as some called it, kindly wishing us on our way, but a return to another much-missed home; our custom of going to and fro, since I was a child, between city and country and between countries.

A pre-dawn taxi. in charge of a distracted young conversationalist, took us, circuitously but chattily, to Birmingham Airport, where sparser numbers eased our check-in. An efficient Ryanair official with a Prussian shock of blond hair stapled and stamped papers we thought might be minutely checked. Only where we had to pass – randomly - through the body scanner was I politely asked, despite my sunflower lanyard with its exemption card, to don a proffered face-covering for a few seconds. There were just 31 passengers, so much choice of seating once in the air. A drink and snack to hand excused us niqabs for the three hour journey. I’d begun reading Nadezhda Mandlestam’s ‘Hope Against Hope’ - alternative title ‘Isolate but Preserve’? – a salutary entertainment, lucid, funny, bitter and noble, on the fate of Osip Mandelstam after he’d written 16 excoriating lines about Stalin in 1933. ‘Salutary’ because her pleasing writing is a reminder of how much further states and their hapless populations can collude in accepting and fatally enforcing delusion and fantasy.

On alighting from our plane around noon Eastern European, I knelt and placed my hand on the baking concrete and kissed my palm. In an instant a member of cabin crew, solicitous, asked if I was alright.

“Yes yes. I am just so happy to be back in Greece”

On the way up the gentle ramp into the terminal another person in livery, leaning over me from further up, asked if I was OK.

“Yes yes yes! But thank you so much”

I smiled rejoicingly like the ‘vulnerable’ slightly dotty old bloke they took me for. At the glass doors into the cool and familiar interior of Arrivals, Lin and I were promptly ushered to the head of the zig-zagging queue, our documents, so conscientiously and apprehensively assembled, were processed unheeded in seconds, our passports unstamped courtesy of the request, printed in Greek, attesting residency, though Lin simply asking seemed all that was needed to jump that anticipated hurdle. Later our friend Paul, in Agios Ioannis, said, when I remarked on our unexpected ease of entry, “I think the officials are getting bored with all this ‘stuff’”.

A hire car, available for only a day, was quoted at €82. Impossible to accept. Our friend K, phoned from England, met us in her air-conditioned car, took us to Kaizanis at Tzavros to shop for basics, and so up the winding road between swaying olives, cypresses, and tinder dry verges, towards the familiar frieze of rising mountains above Ano Korakiana, to drop us at the top of the thirteen broad whitewashed steps down to 208 Democracy Street - our common path shaded by Efi’s ivy covered wall, her spreading walnut tree, Vassiliki’s oleander and our wisteria, strewn with drifts of fading Bougainvillea petals. In a minute I’d turned on the water and the electricity; our bags and shopping brought indoors. 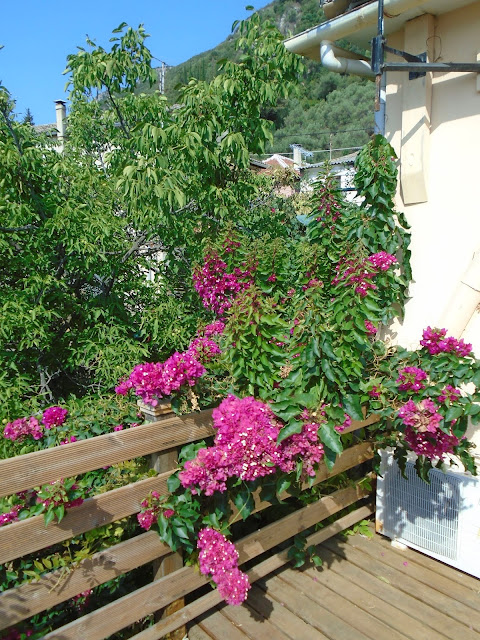