Our afternoon plane from Birmingham, first booked before Christmas for travel in April then changed to September, arrived in Verona at dusk. A 25 minute bus took us to the railway station. Checking a map on my laptop we walked to 1 Via Mura San Bernardino. A texted 5 digit door code let us in. A foreign river, whose name I’d never heard, winds through the city, flowing with striking speed, audible from the walled banks. Beam to its torrent, a sturdy rowing boat could overturn or be swirled against a bridge buttress. After reading instructions and drinking mugs of green tea, Lin and I strolled up Via Mura to an unaggressive castle with arched geometric battlements. Through its centre a cobbled footway led over a sociable bridge with side walls and niches on which you can stand to look over the swirl of the milky coffee coloured river.

“On this one, you’d need only dodge roller bladers, bicycles and electric scooters”

There was a bar at the end of the bridge. We sat under plane trees sipping generous Campari Spritz with ice and a slice of orange. The helpings of bitter Campari were generous, so I bought a soda water to top up.

I was glad to be ‘abroad’ at last, on our way to Greece. Lin and I boarded a train at dawn, trailing our bags from our lodging in time for coffees at Porta Nuova Station. Men in army uniforms and boots, pistols holstered, stood at the station entrance to say ‘Preggo’, reminding travellers to cover their lower faces.

Our April tickets had been shifted by Trenitalia without the April concession. Lin dug out €60 extra for tickets to Bari. The day before we’d taken a 45 minute bus to Lazise on Lake Garda. Old and new money seemed to have prevented the usual mess that commercial free-for-all can make of a popular resort. From the bus stop, a paved path sloped gently to the water’s edge between affable houses wreathed in bougainvillea, via the stalls of a market where Lin bought me sandals and she some jeans. The summery haze made the further shore of the lake remote but for a smattering of trees, the water glassy calm, now and then ruffled by small breezes. We sat on a bench beside the blue water. A line of sturdy pines lined the promenade, their surface roots, knuckled webs, enclosed by marble frames. I watched a small triple decked ferry. Distant passengers in silhouette enjoying the leisure of the lake. Minutes later small waves smacked the shore. It could have been the sea. We enjoyed a meal – pizza, mozzarella salad, chips, wine. “Romans sojourned here and discussed the state of the world looking over the water”

An hour’s wait for a change of trains at Bologna, and time for coffee and butter croissant across from the station. Platform 12, via a broad tunnel, then, as timely as usual, an intercity train; we, in comfortable cushioned seats, reserved in one of the first carriages, ‘socially distanced’.  For six hours we sped down the length of Italy. Oddly the train was diverted from the main line, somewhere by a hamlet surrounded by a sandy wood - an Italian Adelstrop. We waited in silence, mildly anxious lest the delay became longer. Starting again the train ate up lost time, at one interval of the journey, rushing through a landscape of grassy dunes – “like in that film of the kidnapped child” we agreed simultaneously - on past miles of holiday apartments and beaches, sparsely populated, coated in ranks of parasols, arriving a few minutes late at Bari Centrali.

The hourly bus to the port would take too long if there should be boarding ‘complications’. A taxi costing €15 took us to the quay for ‘Grecia’. I could see the familiar top works of our Superfast ferry above parked trucks.

We had to prove to the woman at the check-in desk that we’d received an email confirming we had completed and submitted a Greek government pre-boarding health declaration questionnaire – a Passenger Location Form. The screen shot of the email (not quite the full page, as the whole thing didn’t fit on the screen, but at the bottom it showed the important bit – the applicant’s name, date of birth and passport number), was not accepted.

“I must have an email with both names,” she insisted. Lin said the email only mentioned ‘the applicant’s’ name. “No, I need both names on the email. Forward it to me.”

Having told her we had no internet – no smartphone, now the norm - she directed us to the on-site Wi-Fi café a few metres away. Sat there with cold drinks, Lin opened the email and confirmed that, as she -  ‘the applicant’ - was the only name that appeared, though the on-line form had had to be completed for ‘all  family members’. Indeed, when filling out the form, Lin had to sign to confirm that only one form was being submitted for us both.

“So what are we supposed to do?” I said

Before forwarding the email to the check-in, Lin typed my name, DOB and passport number below hers. When we returned to the desk, this unofficial addition had done the trick.

On board the ferry, with relief, we sat among truck drivers looking down on a cargo deck wrapped by engine roar, an undecipherable cacophony of welcoming warnings and instructions over the PA, as below us international lorries were skillfully reversed into their parking for the crossing to Greece. The sun went down. Imperceptibly at first our ship moved off, gathering speed. Later, having bought WiFi time, we received, as promised but not entirely expected, our ‘quick response code’ “to be sent after midnight on the day of scheduled arrival in Greece”.

Later in the night, we chatted on HouseParty to Amy in Gloucestershire. 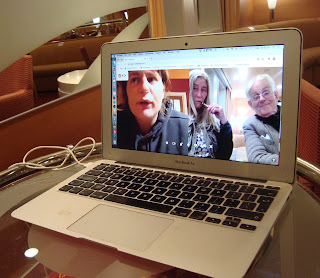 Amy, who’d spoken of the challenges of parenting in competition with the tempting, sometimes bizarre depravities available to children, mentioned that “Someone thinks it’s a laugh to make a version of Peppa Pig that turns into an imitation of the stabbing scene in Psycho” We retailed other example of sad things that pop up on smartphones, caught in time by a vigilant parent who must then explain the idiotic naughtiness of teenage fellow pupils circulating naked pictures of themselves thinking it’s smart, or a friend’s son, Asian dad long disappeared, suborned on his phone by an EDL member seeking friendship and the recital of hate for ‘Pakis’. She told him he might well be proud of his background ‘which can save you a lot of trouble in life’ and confiscated his phone.  Amy suggested that as parents struggled, and some failed, with the raising of their children, so our government seems to be struggling with running the country. "It’s got too complicated."

We snoozed a while on bar settees. I woke to see lights passing on the shores of the Corfu Channel, quite close, either side. No moon. A little later the ferry backed up to the jetty at Igoumenitsa. The vast concrete apron has little protection or guidance for the few foot passengers. We trudged in the warm night towards the reception buildings where we were directed to walk yet further to a pair of busy women in full PPE – face masks, plastic aprons, who were testing new arrivals, though not truck drivers or a man on foot who came “from a different country”, with swabs for the virus. They bustled as we shuffled, checked our QR code.

“Thanks. What’s your name?” 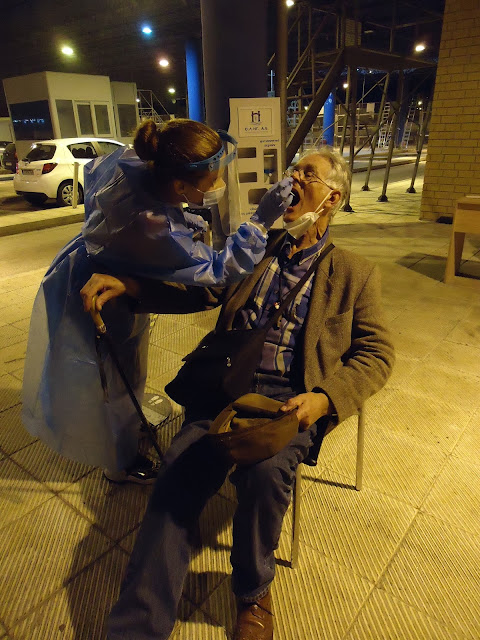 We set out again across the apron.  “I don’t believe in it. This isn't real. It's all a big waste of time” said the affable, slightly jaded, official who’d pointed us to the testing place, and looked after our cases the while. Half a mile along the port road – a familiar trudge bumping over the edges of pavements and potholes with our bags – we came to the smaller Corfu ferry, climbed up steps to sit on Nanti’s top deck to enjoy the sun rise and feel a gentle breeze over the Ionian Sea as our island approached.

A quick shop, in our hire car from ValuePlus – all employees in masks – and Lin’s driving the familiar roads to home in Ano Korakiana. Vasiliki, tending her plants, saw us as we came down the steps from Democracy Street. We all knew we could neither hug nor kiss in the usual way. We held our arms out in greeting before getting into the house, carrying in groceries, turning things on, putting stuff in the fridge and making cups of tea and coffee.

“Blimey! We made it”