I spent a Good Sunday with our grand-daughter. Hannah stayed overnight with us, because our grandson was poorly. I've got to know Oliver quite well. We’ve been on expeditions. We talk.
My stepfather long ago said “I don’t like children while they’re still small animals. I like conversation”
First Hannah and I and Oscar dog went up to the Soho Loop with my bicycle and, placing a cushion on the rear rack, carried her into town on the back – stopping now and then to look at things – she holding on the saddle stem; dismounting when going over a hump-back on the towpath.
“Are you OK, Hannah? Just shout if you want me to stop. OK? Hannah! OK?”
“Yes”
Things and things. Flowerless, leafless, winter-quiet shrubs. Trains rushing past, wheels at eye-level, seen through railings beside the towpath.
“Do you hear the rails singing before the train comes by?”
Litter in the brown canal.
"See how it floats so slowly. Look, here’s a narrow boat coming”
We watch its slow progress towards us.
“Wave, Hannah”
Passengers wave back.
"See the geese! Look there's a duck and a drake, the one with the shiny green neck"
Hannah watches and considers.
“Look at these bricks?" I say "Between them, mortar, so they stick together. Go on. Touch"
Hannah isn’t – yet - asking “Why?” all the time.
How does she take in these things?
Under the bridge near Gas Street Basin we go ‘whoo’ to warn, but also to hear our voices echo.
On the slopes over feeder canals I ask Hannah to dismount, then get on again for the rush down the other side. Oscar runs ahead, and lingers behind – exploring with his nose. If we spy another dog in the distance I summon Oscar with my whistle, and lean my Brompton down, so he can jump in the pannier until the other dog has passed; much fierce growling from Oscar in his safe berth; tail wagging if it’s a bitch.
In town we work our way eastward. On Temple Row a road sweeper with spinning brushes drives slowly by capturing litter, sucking it in. We follow it awhile. Another manual trolley is pushed by a man with a broom, working niches. He points out the machine to Hannah
"We call them beetles"
We stroll over to the St Philip's Cathedral where I take Hannah to gaze up at the Burne-Jones Last Judgment. 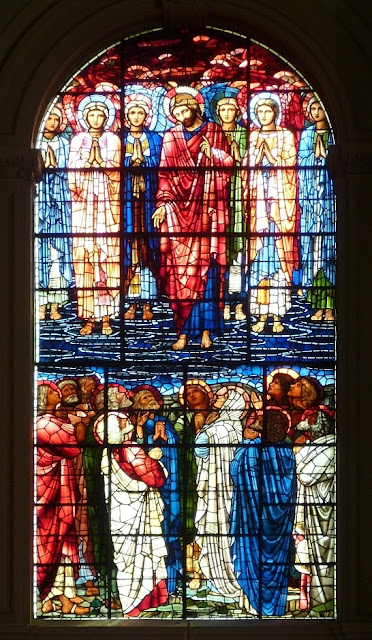 Outside again, we window-shop, talking about, exclaiming, at what we see, especially in the Great Western Arcade.

On Colmore Row at 200 Degrees we sit outside having chocolate and an apple drink and chocolate cake, Oscar in his pannier removed from the bike, cosy at our feet, blanketed with my tweed gilet. 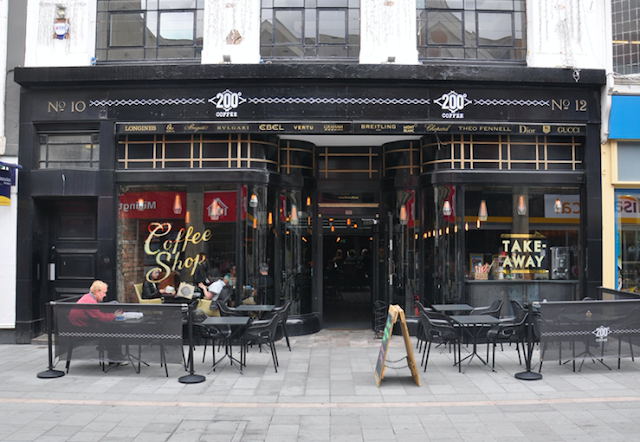 “This is nice, Hannah”
No-one else was outside. Too chilly. I was warm with the happiness of my grand-daughter’s company.
We walked northward over Great Charles Street, Queensway, down Newhall Street on the bicycle, where we turned down dark steps to the canal towpath, to walk westwards up past Farmers Bridge Locks, where the path is often cobbled, the brick blue. Approaching the penultimate locks, I explained the way they worked, both of us peering down mud scummy walls into grey water.
“Let’s open a lock gate!’ 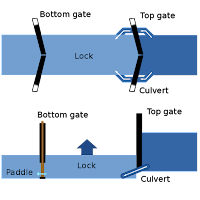 After a while Hannah caught on to the difference between a gate that was impossible to open and ones that even she pushing and pulling on the big paddle beam can slowly open. Then, as easily, close.
“See! If the water’s the same level on either side the gate will open.”
After three locks, one half-full where the gate will not yield to her, I’m sure she’s got the idea.
From Gas Street we cycled back the way we’d come along the Birmingham Mainline, turn north at Soho Loop, now and then summoning old Oscar to catch up with us, and so back to the van on Clissold Street to drive to Victoria Jubilee Allotments to check the sleeping plot.

“Do you remember what it was like in Summer?”
Has she got her head around the four seasons, given how little time she’s been on the earth?