A strong wind blows; nothing to what's happening in the Highlands, but enough to blow even more glass out of a rickety greenhouse on Plot 66 on the Victoria Jubilee Allotments.  Being there, I picked it up, piece by piece, and put it in the back of the HHH van. Later I wrote a note to the site secretary:


Dear G. Don’t read this until after Christmas, but I popped up to the VJA to check that these high winds hadn’t blown away the polythene sheet we spread on Plot 78, and found yet further panes of glass shattered and thrown over the ground from the frail greenhouse on the neighbouring plot. Shards had been blown almost as far as the entry gates (see attached photo). This structure is a hazard. I ask the VJA committee to let me and Winnie remove its glass, ideally with the permission of the plotholder, but otherwise without.  I collected the shattered glass ... glad no-one was around when this glass went flying.  I could do this work  - removing the glass from the greenhouse - on the same basis as we are doing other work with Committee approval. It would hardly take 10 minutes ... anytime after Christmas day. Happy Christmas. S 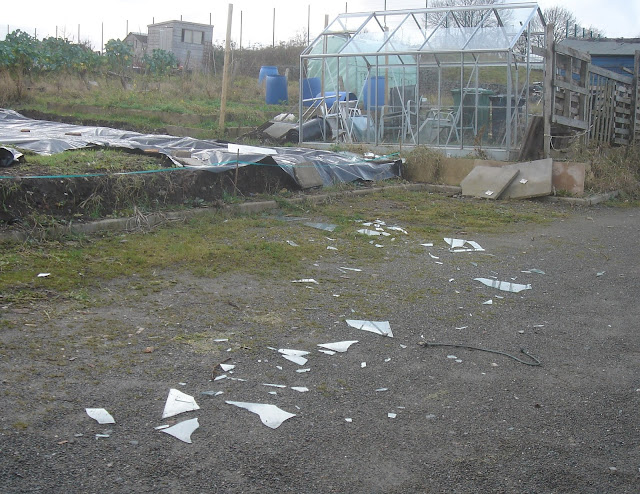 At last I have a brief to start tidying abandoned plots on the VJA.  Phil, our Hon.Treasurer, agreed to let Winnie and I clean up Plot 78 opposite the site gates. A week ago we set to with a will.
The plot had been abandoned after its tenant was evicted for leaving his tap running overnight in the middle of the summer, a breach of rules that brings penalties at any time of the year. I'm pretty sure this tenant was glad to see the last of the plot anyway. They left owing a year's rent.
I was ranting away to Vanley about why 'some people' treat their plots as tips.
As I recall, the person working plot 78 was working happily away some two years ago, building terraces to accommodate the gradient of their 200 square metres. Something went wrong. They lost interest. Not just like that; rather a gradual decline of enthusiasm, during which the site accumulated the detritus of waning intention; a mess, whose detail became more unpleasantly clear as we began tidying the vacated plot. Soft drink, beer and cider cans, plastic and glass bottles, sacks of domestic rubbish, broken glass mainly from discarded window panes brought in to build a glass house that didn't happen; spare off-cuts of wood, brought in for a purpose, allowed to rot; pointless levees of soggy plastic sacks filled with clay-mud and roots, entwined with lugs of couch grass from which extend rhizomes fatter than spaghetti, beneath which, embedded, we find more rubbish, flattened seams of black polythene that have to be scraped up to get closer to the earth.
"You know" I said to Vanley, who stays calm on these things, but listens attentively, as I stoke pious frustration at other people's errancy, their downright feckless lack of talent as gardeners
"You could donate someone a studio, give them paints, brushes, linseed oil, palette knives, canvases, size. Everything a painter needs. Come back in a year and all you have, instead of a parade, as you hoped, of creative work, of art - chaos! The materials not just abandoned, but squashed, mingled, smeared, with unrecognisable pieces of rubbish that might have been easels, chairs, frames...."
Vanley, who's famous, said to me ages ago "Allotments are a metaphor for life".

Well how did someone manage to leave an original plot in such a mess? It's not just fallow. It's a tip. Instead of  being cultivated, it's been used. With the worst and most of the waste removed Winnie could strim the plot to about 6" all over and then I spread 200 square metres of black polythene held down with bricks and stones. The uneven ground, caused by the terracing and the original intention of divided-up beds, made it tricky to keep our footing.
There had been an attractive small oak tree at one corner of the plot; killed after a heap of fresh manure was dropped on a corner of the plot. I left the manure uncovered, so other plot holders could help themselves. The trunk of the oak made a good stake. Someone will use it. 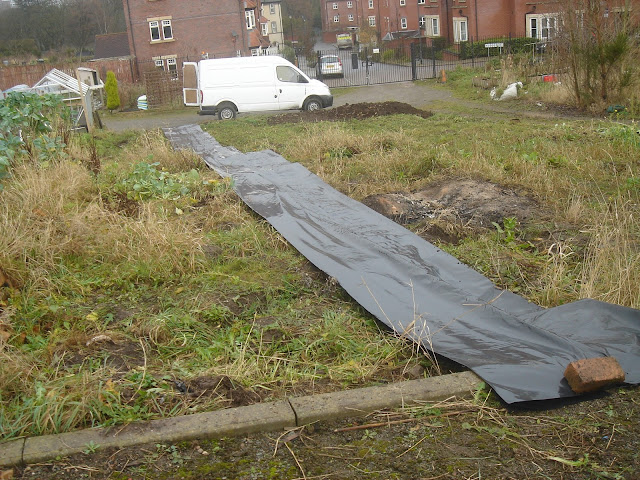 Phil and the VJA Committee were pleased with our work on Plot 78 and have now asked us to tidy 11 more vacant plots.
On Friday we began on four of these - 54 to 57.


By midday the van was half full of cleared waste. There's more to come - a large pile of red bricks and over twenty five sheets of double glazing stacked at the bottom of the slope between the allotments and the houses.

The most visible rubbish was consigned to cleansing flames - the smoke blown north by a steady breeze. Later the wind changed direction, blowing smoke towards one of the houses. I knocked on the door, apologised and found it was someone I knew and was 'forgiven'. The wind changed again. As the fire heated up, the flames grew stronger, the smoke lessened. Winnie strimmed, I carted rubbish, again having to work through a blanket of couch grass to ease out layers of plastic sacks, lino, carpet and chipboard, in one area a layer of broken glass... 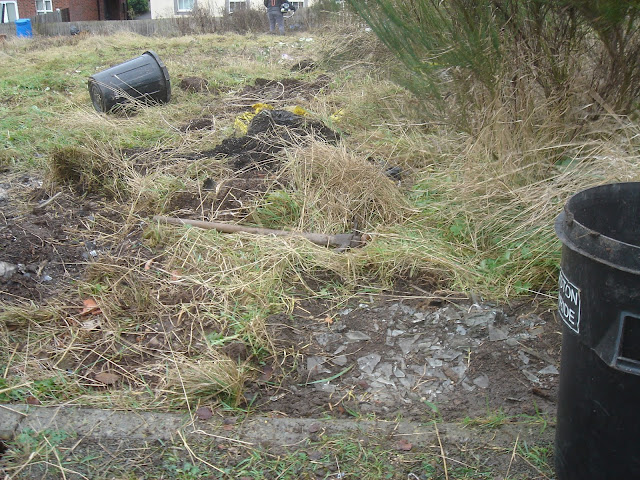 ...to be picked up shard by shard by hand and dumped in the van... 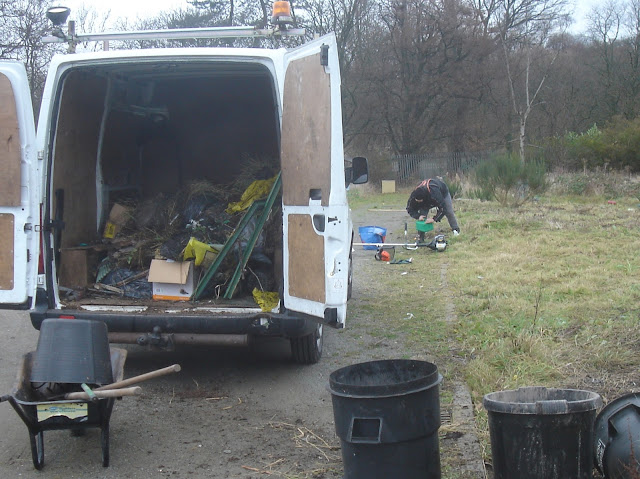 The four plots are already looking better ...
...but there's more to be done, before we can finish ...

...by laying the weed suppressing fabric which Phil has managed to buy in volume on ebay. 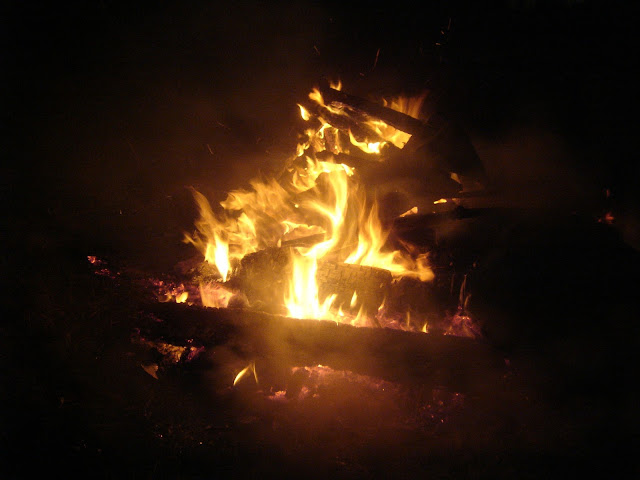 Later that evening I dropped by to make sure the fire had died down to embers. In the morning I picked out metal parts and raked the ashes flat, while Winnie with the brush-cutter cleared all four plots down to 5 inches, leaving a few fruit trees and a line of broom between two plots.
"We've got a lot of work done today" she said.
"And we've done lots on Plot 14!"

Meanwhile Plot 14 is being prepared for 2017 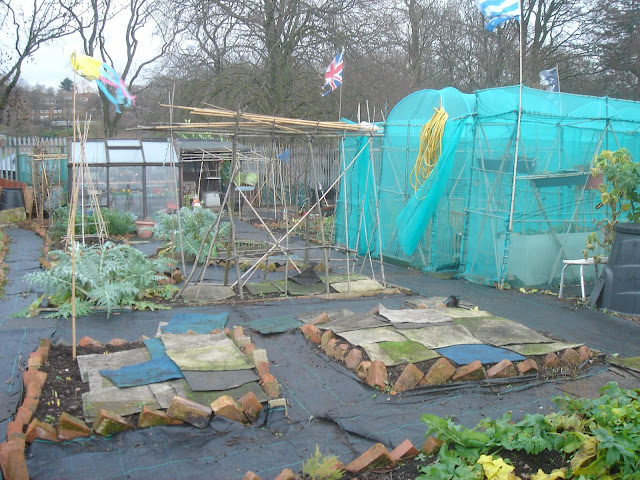 Last year and a few months we'd made the plot manageable by making more, and wider, paths between smaller beds that could be dug from all sides without need to tread on the working soil. Now I'm reclaiming some of the walking space for beds at the top of the plot.

We needed a mattock to break up boulder-clay soil in an area of our allotment that had been used for parking cars and a van. On the rest of the plot - except the paths - I can get a spit's depth with even a spade. Getting closer to the original soil back in 2010 when I signed up to rent this plot, even a fork wouldn't go down more than inches. Winnie and I, with Dennis helping, used the mattock to get some depth, removing a familiar collection of glacier-smoothed stone embedded in clay. Picking up a fist sized piece, it squeezes together and stays that way. After we'd got the depth - about 18" - we mixed the soil with 'black gold' compost making the beds a little higher, and loamier. I sprinkled and raked in several handfuls of garden lime. Worms aplenty in the compost continued our work.
In two beds I planted garlic in early November - breaking into cloves garlic bought at a local grocers. They've benefited from frost, and should be ready to harvest when their beds are needed for broad or runner beans. 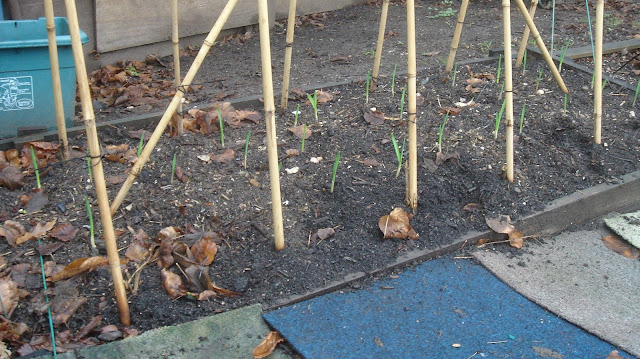 The shed veranda has been leaking. I repaired it on top with a patch of felt over a thick coat of bitumen...

... cutting a rectangle of plywood to sit underneath, held between the supports with brackets.
*** *** ***
Christmas day in Ano Korakiana....Χριστούγεννα! ... την ηρεμία του πρωινού, the tranquility of the morning...
*** *** ***
27th December - work continues. Was someone planning to build a house on one of these plots? 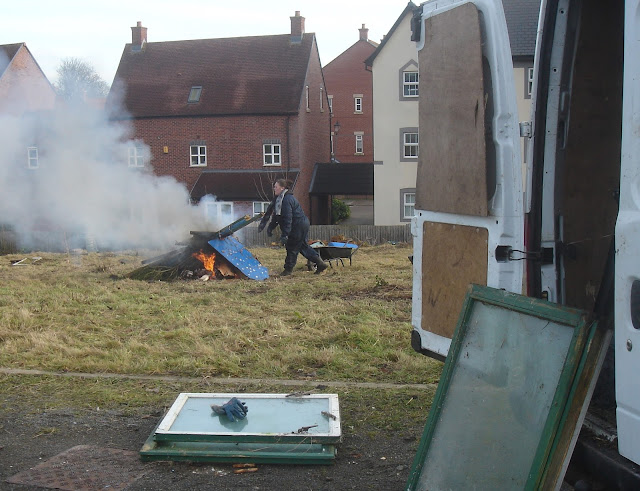 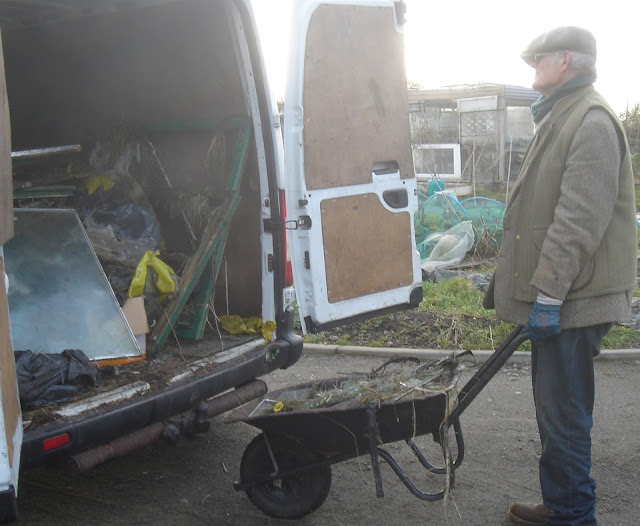 ...and to finish off four more plots, two large rolls of ground cover... 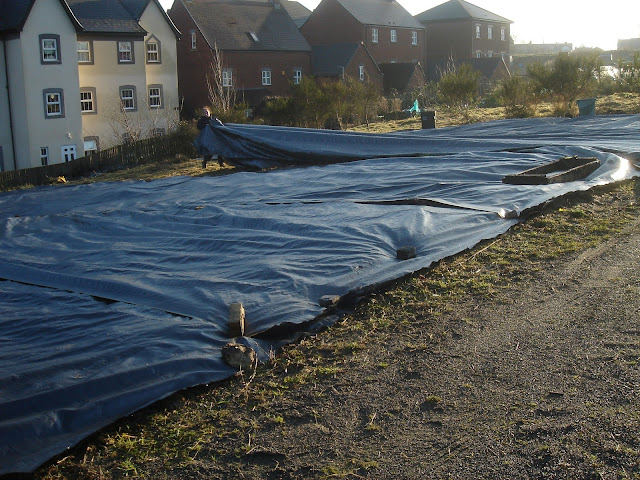