There's no question that my hair needed cutting. But it leaves me feeling uncomfortable. Lefteris told me about a barber - Tantis - in the Jewish Quarter.
'Very good!"
I dropped by this morning at 10.15 and was sat down by the window almost at once, my hair cut with finesse in hardly 10 minutes for €8. Mike, Welsh by birth, is at least bi-lingual, clearly respected by his Greek customers.
"Just leave your folding bike outside. No-one will touch it"
Of course not. 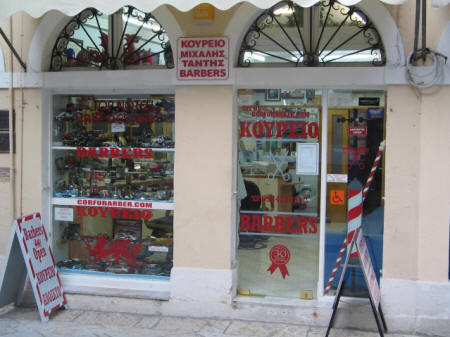 After, I went to the butchers on M.Theotoki, and bought one and a half oven chickens. I'm having friends to supper on Wednesday.
Thursday, Friday, Saturday were days of grey weather, wet and even chilly weather... 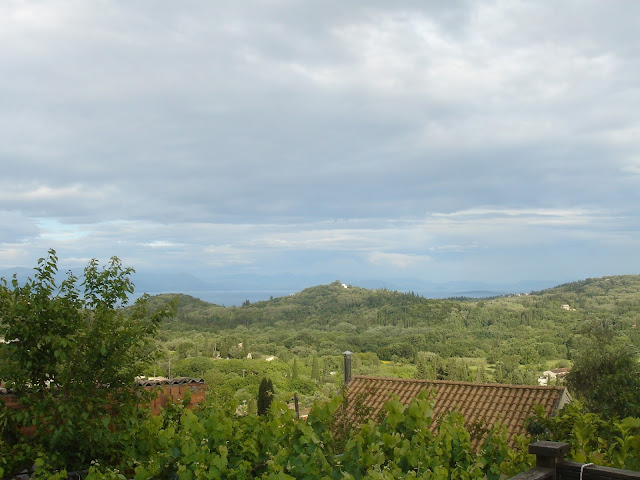 ...but Saturday evening hinted at the forecast for Sunday, when I decided to set out to cycle up to the top of mount Pantokrator again having tidied and tuned my larger bicycle... 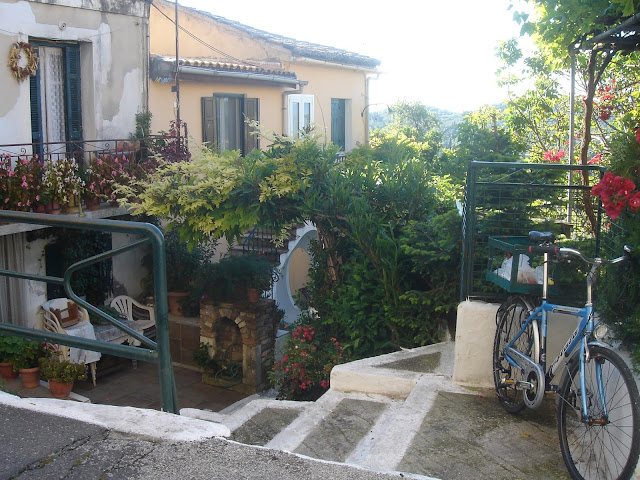 ...doing a last minute check on our upper steps just before 9.00am, then pedalling slowly and steadily upwards... 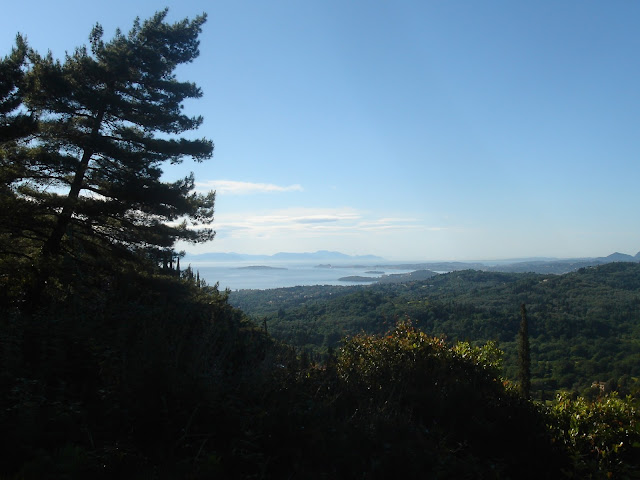 ...Leaving behind the village dogs barking and cock's crowing. Just before St.Isadoras I turned sharp right off the road and up the rough track that cuts across the sides of the mountain above the village heading for Spartillas... 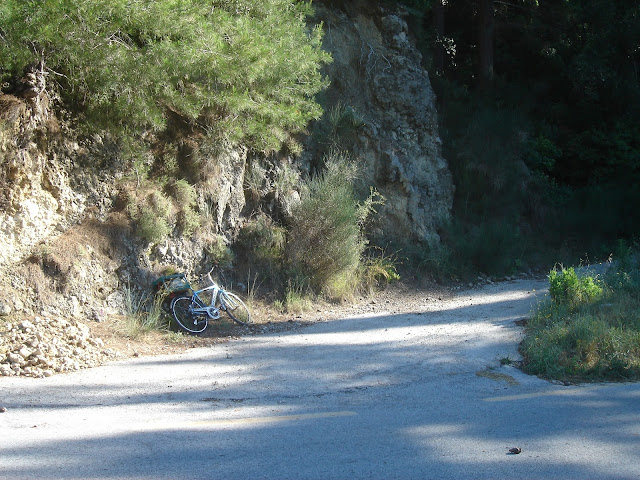 Hardly half a kilometre up the path I heard footsteps behind me. Stephanie on her morning walk-jog with the dog.
"Blimey Steph! I thought I had the mountain to myself this morning"
She continued, just ahead, to a small perch in the verge, made by Wes, to have a drink before turning home... 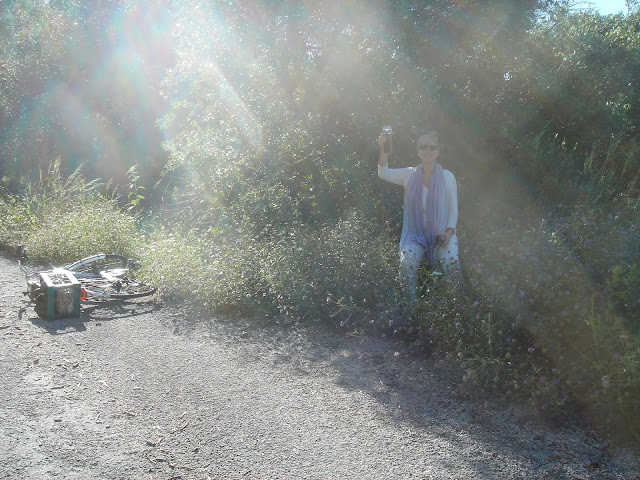 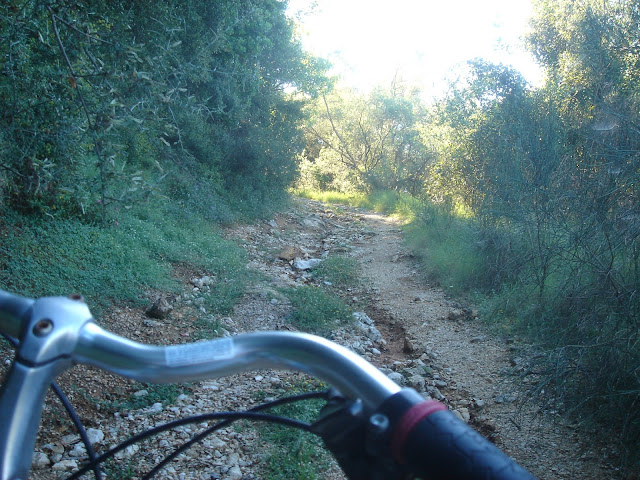 ...before the track smooths and leads over slopes, up and down, onto the metalled road that leads though vineyards to the road from Spartillas...

...and so, to the turn upwards just south of Sgourades into the mountains where the landscape - north to the peaks of Albania and south towards Parga - grows panoramic. 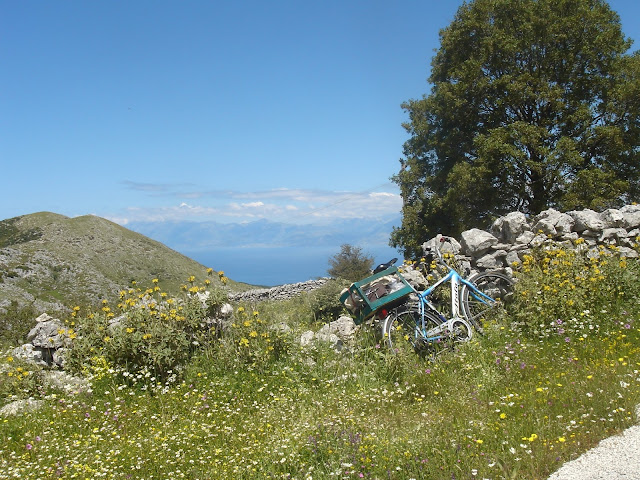 Just before one-o-clock I'm enjoying a diplo skirto and the views from the summit.
It says in one of the recently unearthed Apocryphal books that ‘while life has no guarantee of ups to balance its downs, an elemental truth of cycling is that the discomfort of every ascent guarantees the free wheeling pleasure of an equal descent. 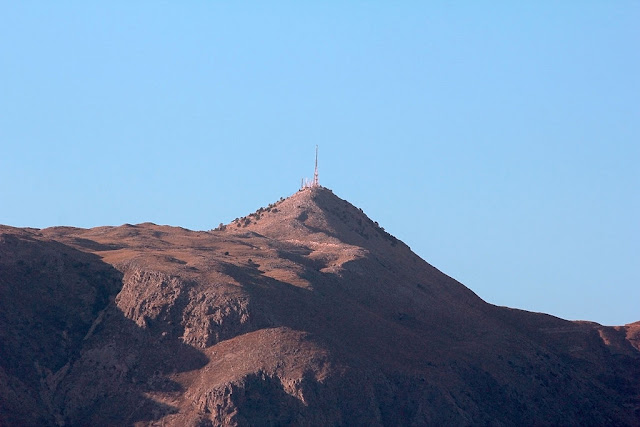 It took me just over four hours to get up to the top of the mountain - 900 or so metres - and less than two to dawdle back via Sgourades and Zygos. It took longer trudging up the hill to Sokraki where I had an early supper at Emily's, before descending on free wheels to Ano Korakiana. 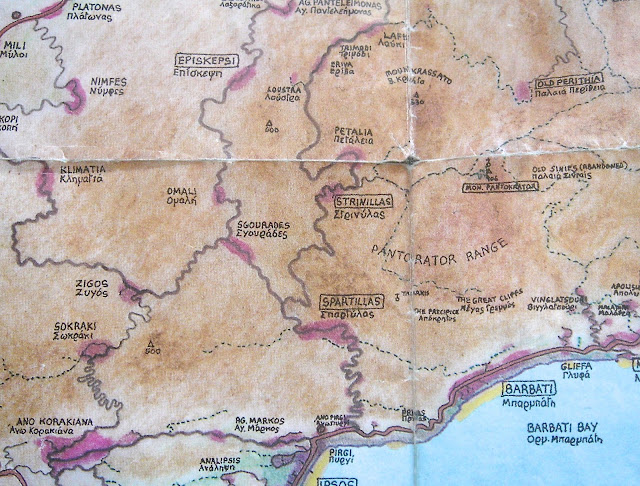 I'm a little surprised and always delighted at the distances I can cover by walking, or, sometimes, when a slope is steep and I’m tired, by steady trudging. On the cycle journey to and from Pantokrator I walked three times: on the rough track from the church of St Isadoras up to the estancias beside the main road between Sgourades and Spartillas, about 3 kilometres; on the final ascent to the top of Pantokrator, an especially steep zig-zag kilometre; and 2 kilometres up the hill between Zygos and Sokraki, most of which I could have cycled earlier in the day, but now truly trudged.
Sailing, without a motor long ago, taught me how slow passages get you places. If a steady breeze gives 4 knots for 24 hours, you’ve covered more than a 100 land miles; at even 3 knots you cover over 80. Walking and cycling up long hills, skeins of invisible spider web, tickling my face, glimpsed as sudden bright lines that flash in and out of sight; the whippy tails of road-basking lizards scuttling into the grassy verge; birds unseen in the scrolling frieze of greenery – olive, cypress, oak, hollyoak, fig, prickly pear, bramble, bracken, and a jungle of summer flowers, some seeded into time clocks much bigger than dandelions’... 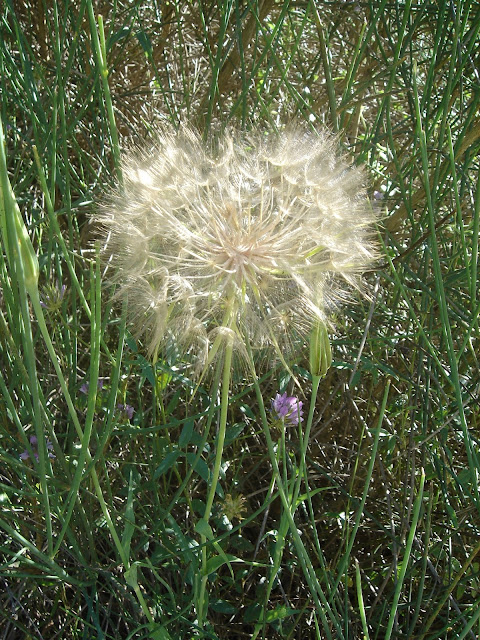 ...lichen on drystone walls and roadside boulders; and, the kaleidoscopic surface of things, especially the road – a nail, a bottle top, the shape of a twig impressed in the tarmac when it was rolled. Layers of repair; starting cracks, some already moss riven.  Even fecklessly cast litter is defeated by the green abundance of beloved Greece in late May. I peer down wells beside the road; cool, sinister, echoing with a ‘plump’ from my pebbles. Kandylakia, tended with flowers, a wick flame floating in oil...

...The bicycle - faster than walking but especially when nearly as slow, toiling up a long winding slope - affords even more quiet than walking. No footsteps or stick-tap. In the morning I heard a cuckoo – intermittent as is their wont -  for half-an-hour along the track towards Spartillas. Now and then a gentle breeze from the north rustled the scenery, bringing the tinkling of sheep bells. In the late afternoon, just above the little bridge at Zygos, there came the sound of rushing water. Peering from the edge of the road, over nettles and tree tops, I could make out the sparkle of a stream fed by two days’ rain. All along my route every colour of soundless butterfly; bees everywhere, but invisible, amid the greenery; louder, a lone bumble bee bumping into flowers; and when resting on the ascent to Strinnilas, the muted soundscape of the whole island, the occasional rumble of planes leaving the airport, heading north over the mountains; the buzz of a strimmer and the up-down sound of approaching and departing cars. Many went by, and back past me, after visiting the top of Pantokrator, stopping now and then for their passengers to capture a memory of the landscape on a tablet. I saw bicycles too, ridden by younger more accomplished cyclists, on much finer machines than mine, climbing - effortlessly it seemed - up slopes too steep for me to cycle.


*I write 'wise' for her discourses following the revelation that 'it was necessary that there should be sin'. I know of no lamp that I, sans faith, can hold to the darkness of what I've read of human depravity since I first studied the Shoah שואה in youth. Julian wrote only God can allow us to stare into the abyss, yet see light. I strive to make sense of Primo Levi's suicide. He is a Jew, yet an atheist, who, in his life-time, I believed had, having been forced to descend into a hell, returned from that man-made inferno, to speak and write to us, with optimism - my catechism. 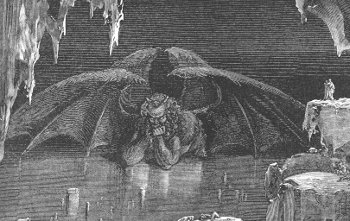