My allotment ia at last fertile; as productive as I'd hoped. There lies this year's problem. Glut.

I have been concentrated on getting things to grow; delighted at the plot's fecundity; taking home onions, potatoes, peas, broad beans, garlic. I have to ensure this fertility continues but that it's planned to avoid glut...as well as shortage.

Says the Royal Horticultural Society: Gluts and shortages are common to most vegetable gardeners. However, with some planning and by sowing seed little and often in batches, it is possible to ensure plants are ready to harvest in succession throughout the growing season.

Little and often. We've just picked a good thirty kilos of broad beans all maturing in the last few days. Our deep freezer was already full; not organised for gluts. And anyway it's freshness we value; food picked and on the plate the same evening. I've given bags of broad beans to neighbours and family but there's still loads too much to eat in the next week. At least I can leave potatoes in the ground, to dig up when needed. I can pull dry and store onions and garlic.
All the same I feel muddled. It's the plot's next chapter. 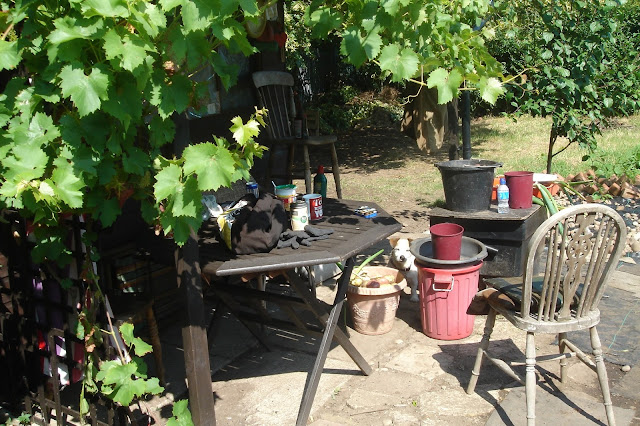 I've been sowing more runner beans, and trying the first time with beetroots and parsnips - but still not 'little and often'. I spent a couple of hours rejigging the freshest compost bay, full of recently harvested leaves, stalks and pods. I raked out about two thirds of it. I spread a two inch layer of soil on what was left riddled from the heap of earth full of weed, twigs, stones and rubbish removed from the plot half a year ago. On this I sprinkled a whole kilo bag of organic compost activator given me by Winnie's dad the other day. Then I put back a foot height of greenery and repeated the process of riddling an earth layer on which I spread Garotta. I added the remaining greenery and covered that too with black earth sprinkled with the last of the Garotta. This afternoon I reached into one of the vent's I'd driven into the pile and found it pleasingly hot. Now to get the other heaps working.

Winnie added to the glut pulling potatoes from a bed where they are still coming up slightly scabby and in some cases showing signs of attack by wireworm and slugs.
"That bed is entirely too busy"
"It's a mess" said Winnie
The potatoes are too compressed, along with onions planted in their midst and the soil is probably too rich - a complete turn-up for the books.
"Yes at the start of last year I dug in manure up this end and then 6 months later I was adding compost. We'll not put more potatoes in there for a bit. Perhaps level it off and use it for turnips?"
Dennis has been helping Winnie who's been away for a week on rare sick leave. 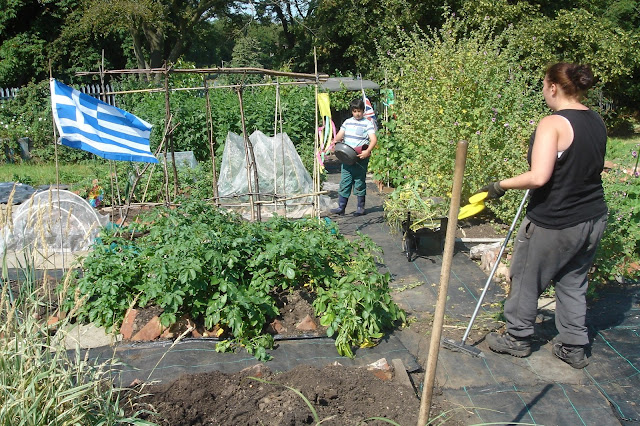 Digging up the broad beans, I saw something I'd only read about and seen in black and white illustration in Gardener's Earth...Quite fascinating! I wouldn't have had the slightest notion, even had I noticed them, of the significance of the small white nodules on the roots. 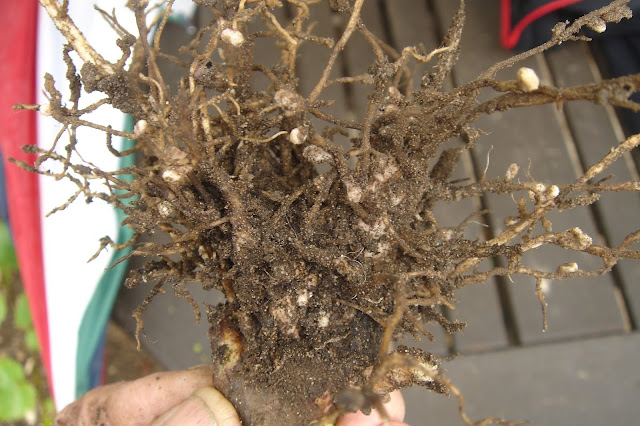 Now I know these are mycorrhizal fungi (μυκός/mikos=fungus, ρίζα/riza=roots) - beneficial fungi growing in association with plant roots. The fungi have formed on the broad bean roots and have been taking sugars from them ‘in exchange’ for moisture and nutrients gathered from the soil via fungal strands. If the soil is too hard or dry the association between plant and fungus cannot occur. As it is these mycorrhizas greatly increase the absorptive area of a plant. They are extensions to its root system.