I mistook the old bloke with a flat cap, a fag in his mouth, shuffling by my borrowed chair in the airport car park, for a local.
"Kalimira"
"Are you waiting for a car?" he said
"Ah yes. Yianni told me he's just coming"
I glimpsed the wife with luggage ready. Yianni drove up, shook the old man's hand, patted his back, kissed his wife.
"Back to reality" I heard the man say.
Yianni saw them off; strolled over to deal with my paperwork; licence details.
"Hullo, Simon. How are you?"
"Not so good"
"Why?"
"Seeing off my family"
"Ah you will see them soon" 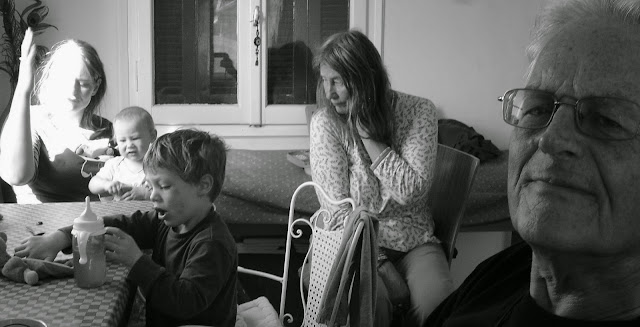 All that's true, so why do I feel the old sadness of separation in my stomach? It's unavoidable. Cole Porter ...'how strange the change from major to minor, every time we say goodbye?'
It matches the joy of arrival, smiles and laughs. 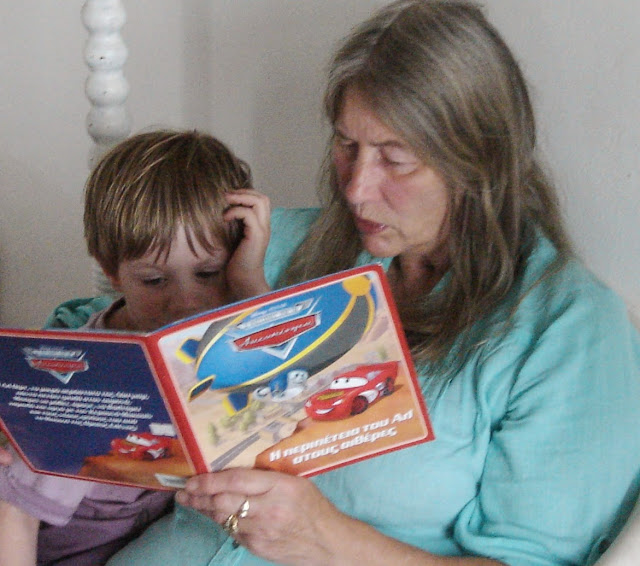 In one way I'll be glad to get back to just-us-two routines with time to make toast with butter and anchovy paste in the morning while Lin sleeps. Good too to take down that inconvenient safety gate at the top of the stairs, disposing of nappies and food strewn in bits on the floor - and cigarette butts; quiet in the house instead of ....

....yelling, weeping, whinging, pattering feet and bumps on the ceiling and shrieks at Oliver's new invention - 'spiderdirt!'..which of course is everywhere, imagined and for real. 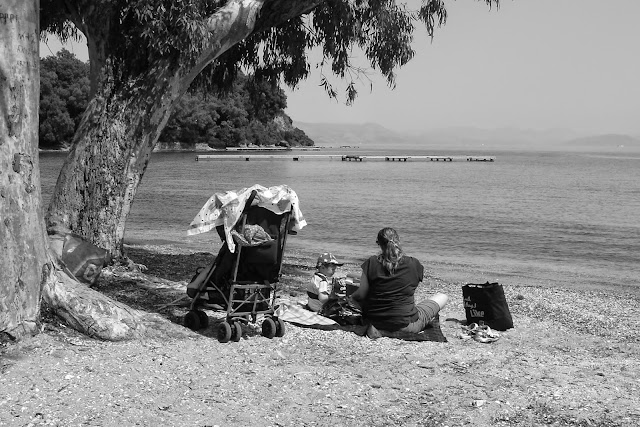 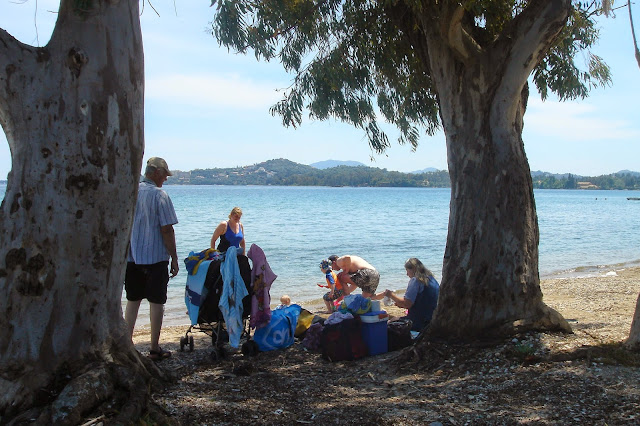 We've been together to Sidari, Kouloura, Kalami... 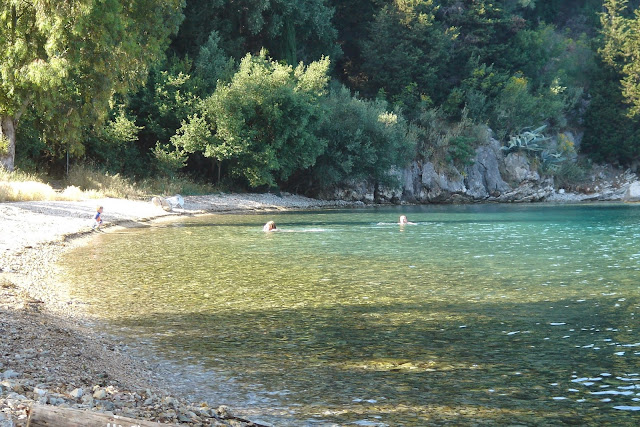 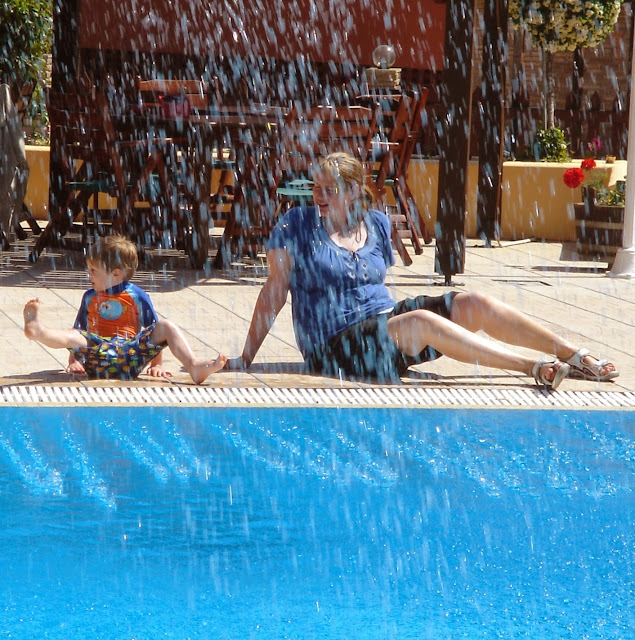 ...Gouvia, Faliraki, places in the delightful city, and at Piatsa in the village where the children are made much of and we watch people and cars and bikes go by. Oliver's been to the shop with me to buy bread. He can say "psomi", ''efxharisto"and "yasoo" and cope with being hugged by - to him - strangers. Oliver and Guy came with me to Pirate Island in the boat.
Last night - their last night - we had Mark and his parents for supper. Lin made two kinds of meat loaf with tasty tomato sauce, baked potatoes with butter, runner beans and carrots, and lots of bread before that to mop the mix of balsamic vinegar and olive oil that came with wide plates of tomatoes and mozzarella, like abstract patterns.
I imagine Oliver, especially, as a camera  '..with its shutter open, quite passive, recording, not thinking' starting an album that will last his life.

*** ***
The day before they left my ache began, adding to the joyful taste of every moment. The still summer air within the shade of the cottage hallway was suffused with the unmistakable smell of a live brown trout just caught, held, to keep it pristine, in a small sheaf of fresh grass laid in Bignall's kreel. On such days as this when departures approaches the little dying comes in small sensations that touch every sense and cue timeless associations. What is beautiful in the day becomes even more beautiful.
This is when memories are made that last until old age, until death I suspect, hung in the memory gallery; sometimes still pictures, to be evoked by a smell, or hung in the hall of continuity open all day and night for life - awake and asleep - the palette of every sense, separate and together - the latter the mysterious ingredients of déjà vu.


Innocent as artists but without the craft. Nothing is significant – expect food and love and attention – nothing is insignificant. Nought selected, everything relevant, all is fecund with intimations. Later the children will select, learning the necessary understanding of common sight, which so few slough, to recover glimpses of celestial light, dreams that recur, gloriously fresh.
*** *** ***
I had a frantic text from Winnie... 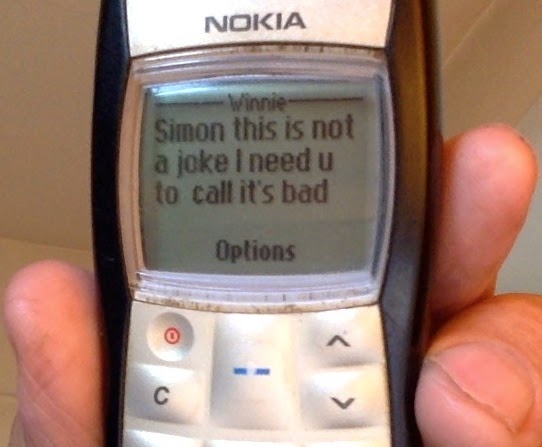 ...the bees had caused her problems. She and Dennis had been stung; she twice. I phoned and emailed Gill, my neighbour apiarist. She said the bees population was expanding beyond the hive on Plot 14. She halved the colony. That vexed the remaining bees, hence the text from Winnie. More phone calls. I told Winnie she must stay away from the allotment but she went back and called me again and sent me a clip from her phone...

"Winnie! They're swarming"
"They're dangerous"
"No not while they're swarming. It's OK but phone Gill now"
Later Gill told me that thanks to Winnie she'd caught the swarm and temporarily moved the colony.
"There should be an almost entirely new lot and I'll bring them back"
"I so hope so. I do not want to lose our bees"
Posted by sibadd