We got out of our cars into warm sunlight before the mist arrived to surround our small stroll around the summit of Mount Pantokrator, now and then parting to reveal the distant roofs of Old Sinies far below, and closer, the winding white road by which we'd arrived, ascending from Ano Korakiana via Sokraki, Zigos, Sgourades and Strinilas. Lin and I explored the cluster of commercial radio huts, slung with humming air conditioning units, a hamlet of aerials glued with concrete to the southern col of our small summit. 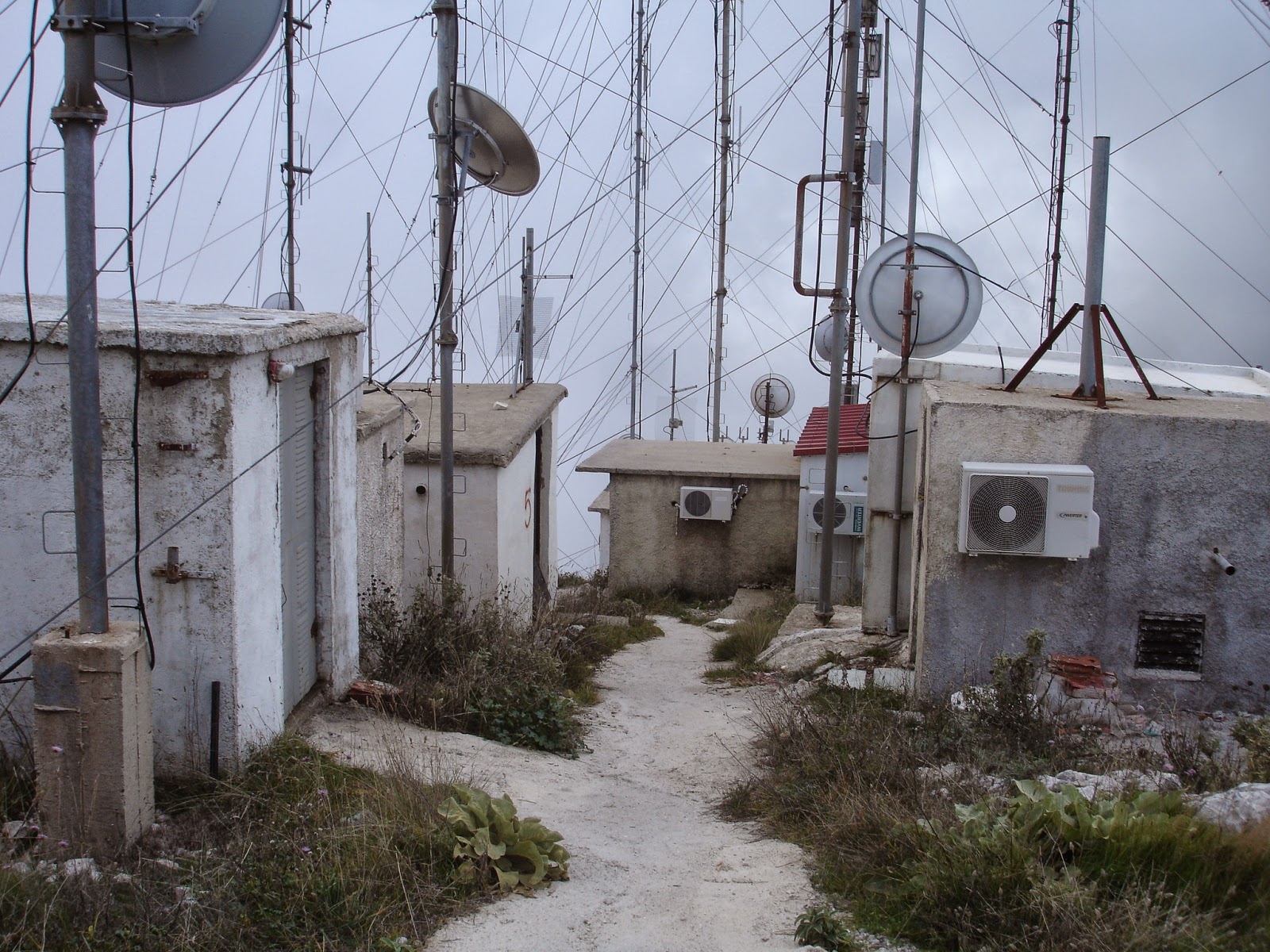 The monastery church was locked and barred.
"Why?" I asked Spiro in the shop
"The priest is ill. Normally it's always open"
Young cats, unlike most in the village, collected for cuddling - unwary of strangers
We descended a kilometer to a place in sight of the mountain top and spread a picnic on a grazing just off the road in the company of things that keep people away from such lovely places – two varieties of ant, a dung beetle, wasps, a lone mantis, a bumble bee, small butterflies and day moths.
"Why didn't you bring the picnic blankets?" asked Lin
"I forgot"
I'd spread a spare shirt, a couple of towels, even my jacket.
"We're fine!" 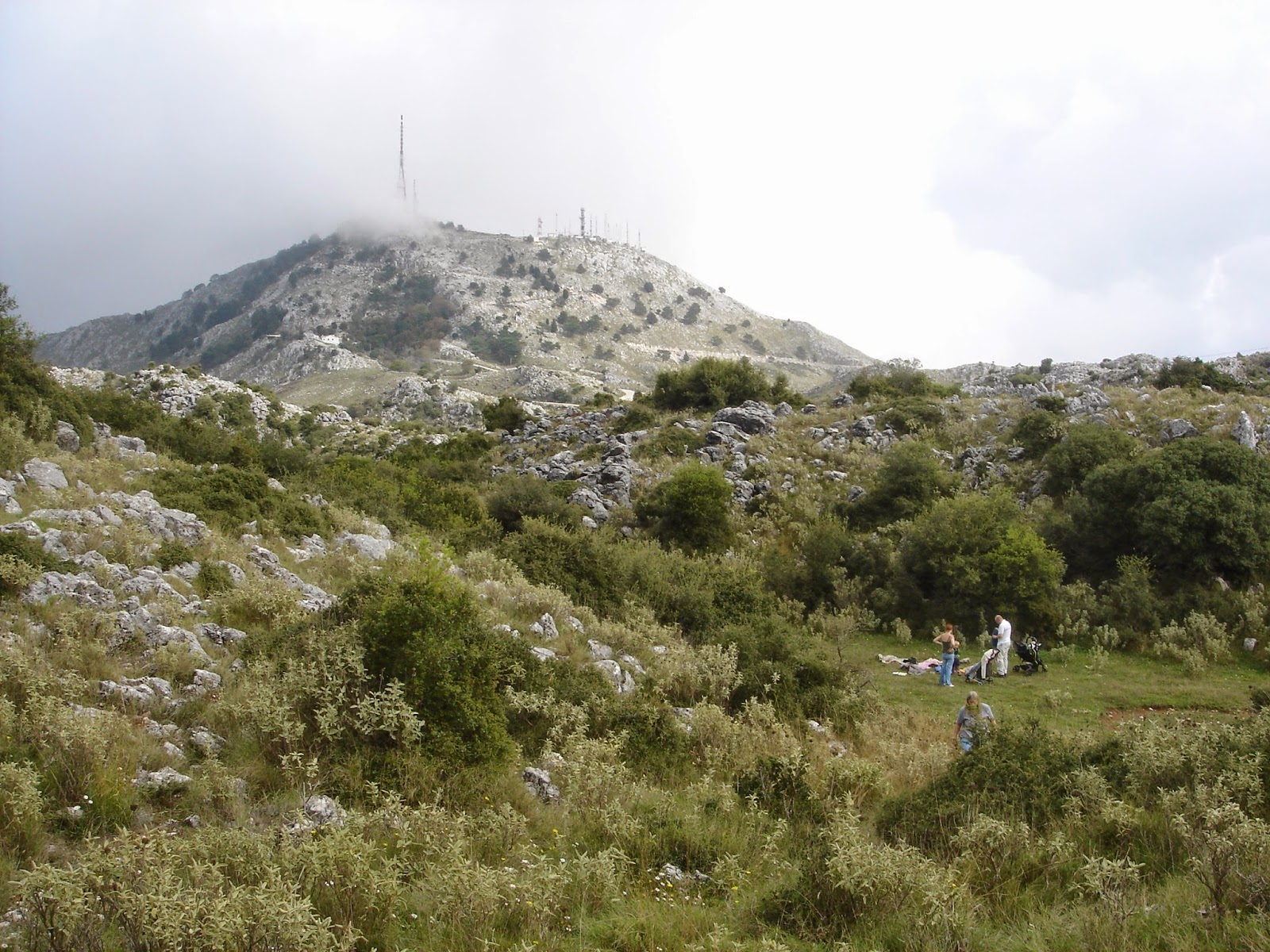 *** *** ***
Yesterday we went as usual when we have a car to the Lighthouse - ο Φόρος – table-top sale at Kontokali, then after the usual humming and haaing with arguments and indecision, to a pebbled beach near the ruin of the old Venetian Arsenal where the Corfu Rowing Club have made three wooden rafts into a jetty.
We’d bought souvlaki and giros from Spiridoula, working as ever over the turning spit at George’s.
“Did you get chips for Guy and Amy?” asked Lin
“No! I got what people ordered..I made the list as I thought agreed"
Lin shrugged to Amy “You didn’t tell your father to get chips as well”
“Shall I go back?”
“No don’t bother”
We sat in the sun on two picnic rugs I’d remembered to bring this time. I sat on the jetty, jeans rolled up, and dangled my feet in the mild sea. A slight breeze blew from the north. A few locals shared the shore.

Planes came high overhead now and then. After a while Guy and Amy took Hannah and Oliver further along the shore for shade. Lin lay to read. Sophia slept. Liz and I leapt off the jetty; drying and warming and swimming again. As the sun lost some of its strength Amy and Guy came back with the grandchildren. Oliver dislikes water at the moment and clung to Guy up to his waist. Liz dipped Sophia.
“There’s a pervert over there.” said Liz “He's watching the women. I don’t think it’s at the kids”
“He had his hand in his underpants feeling himself…Doing it” said Amy
I saw this gaunt elderly man, lean and bronzed, in the distance. I strolled over crunching gravel and for an hour stood between him and his glassy stare, standing by him in the water when he rose unsteadily and swam a few listless strokes; resting my shadow across him, as muttering soundlessly he tried to stare at women on the beach with the rusty focus of a spent torpedo. Peering at his watch he picked himself up and doddered from the beach.
Amy joined me jumping in again ... 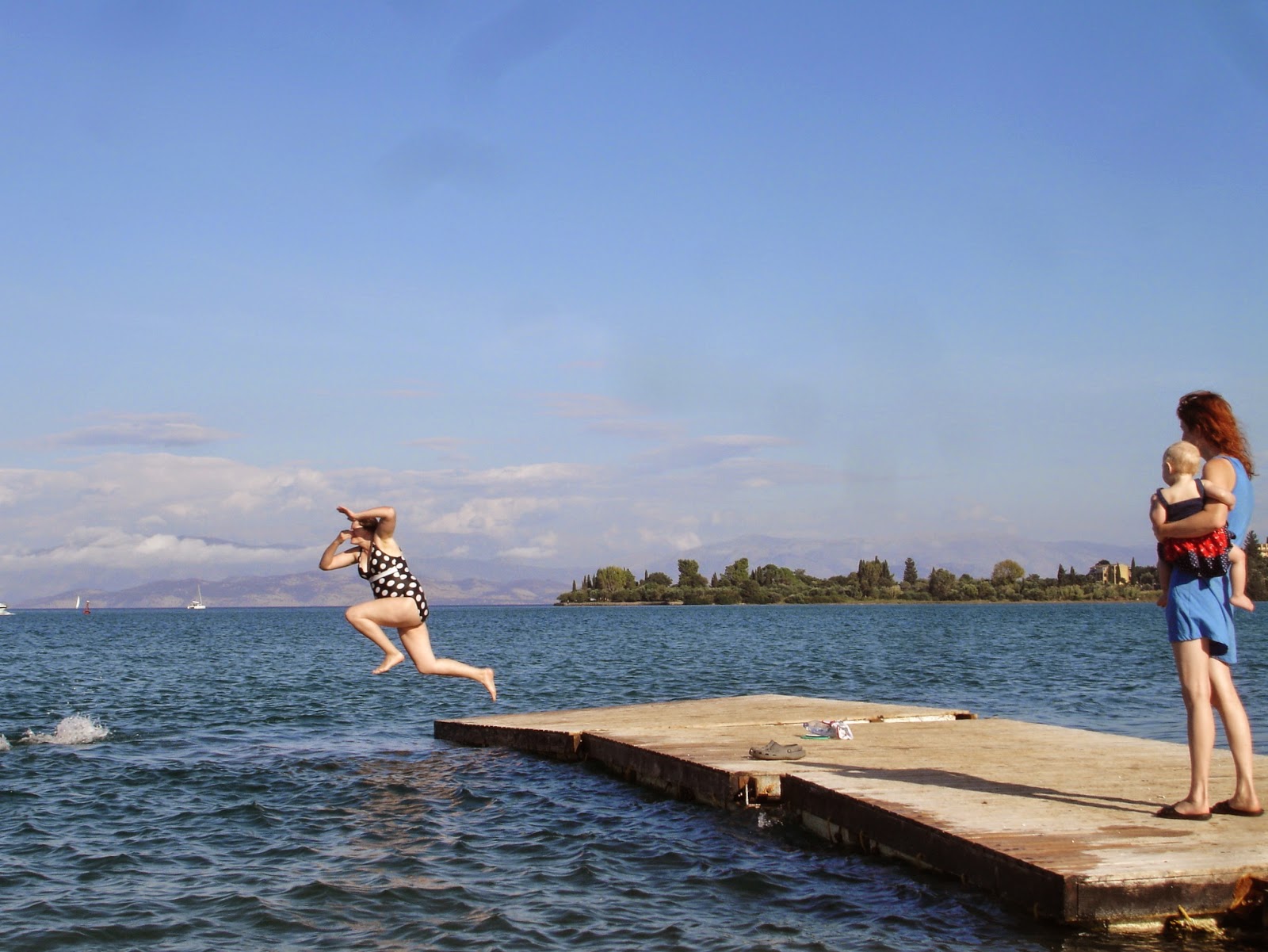 ..and so it was for the rest of the afternoon, before going into town; watching the sun set from the Faliraki corniche, a drive homewards for a long supper at pleasantly talkative Strapunto – delicious grilled meats (some boxed to take home for Sunday supper), breads, feta and salad, grilled mushrooms, chips and the children not embarrassing us too much with sudden complaints, as we sat across from a model family, father and uncle, mother, three small slim daughters and yiayia smiling benignly.
Home again in the cool of the evening
“Don’t bring the washing in now” said Lin “It’ll be fine in the morning”
The children disappeared into the soundest sleep.
“I’ll shower off this salt in the morning” I thought, heading for slumber, nearing the end of Jeffery Eugenides’ Middlesex – a wonderful fictional biography about Greeks in America starting - almost - with the destruction of Smyrna; the massacres of 1922 - an event whose truth is debated still.
Posted by sibadd