We return to Greece in just over a month, but Rock Cottage in Lydbrook weighs on us even there, the place we found in 1981 and bought in days.
Long ago, so it feels, Lin and I went to a wedding in south Wales and on the A40, the dual carriageway that extends the M50 into Wales, we glimpsed Ross-on-Wye on the side of a rise above the river, its distinctive church sat as a town almost without sprawl inside Gloucestershire hills.
"That's a nice place"
"Lovely" 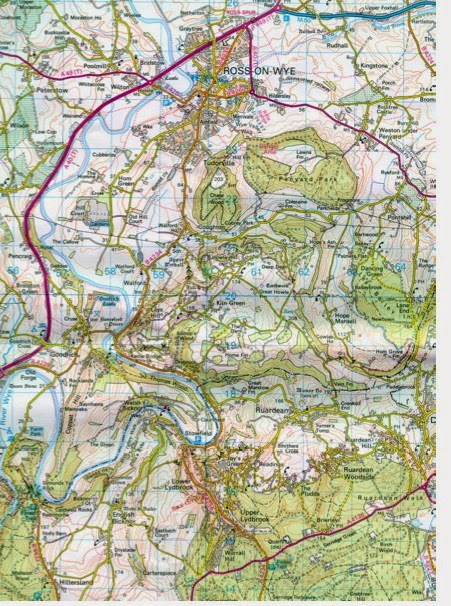 It could hardly have been a fortnight later, a weekend in June or July was it? An estate agent sent us descriptions of three places. We visited two. The second was up a narrow rough path far from the road. Lin stood in the waist high meadow grass of the small piece of ground,  attached to the house, on the side of the hill, looking over to a frieze off trees across the valley. There were butterflies and bees.
"What do you think?"
"I love it" she said
We bought it on Monday.
It was a mess, empty for a good two years, encroached upon by the forest, full of inept furnishing, cold in winter, mouldy in summer. We bought it in the year of the birth of our son Richard.
It became a place we went for days and weekends and whole weeks over twenty five years. Lin's dad rewired it. We put in central heating; but did most of the improvements ourselves, until we found a builder to add an extension that enlarged the sitting room, 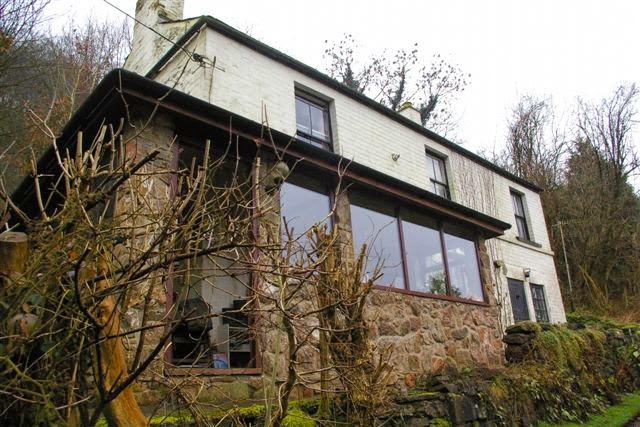 Then the children grew up.  It was trickier for Lin's parents to climb the barrow's-width path curving 200 steep paces up Bell Hill, where the cottage had been built at the end of the 19th century on a ledge cut of the hillside. No house could be built there now. Regulations require some direct sunlight on a residence all year round. The tall beech trees on its crest and Bell Hill itself takes away direct sun from Rock Cottage six months of the year.
It's in a wonderful place. Walk out the back and into the Forest of Dean; climb, even clamber up, the deep shaded path up the hill and arrive at a view that on a clear winter's day shows the Brecon Beacons, sometimes snow capped.
From the windows of Rock Cottage you can gaze down the narrow Lydbrook Valley to Courtfield on a hill above a bend of the River Wye.

We seem to be isolated amid every kind of greenery from the tall trees, oak, beech and ash especially, but proliferating ash and hazel and mounds of brambles, nettles and myriad wild flowers, and meadow grass. Yet just down the path we have a village shop, bus stop and the rest of the village of Lydbrook strung out on the road from the edge of the Wye to the Gloucester-Monmouth road a mile and half up onto the forest plateau - with short journeys into the forest to Cinderford and Coleford.
For years our family, Amy and Richard and my parents-in-law, Dorothy and Arthur, Lin and I were won't to pack the car in Handsworth and head 75 miles down the M5, passing the Malvern Hills to our south, then west then north as at Strensham Junction we turned west on the M50 and headed for Ross-on-Wye... 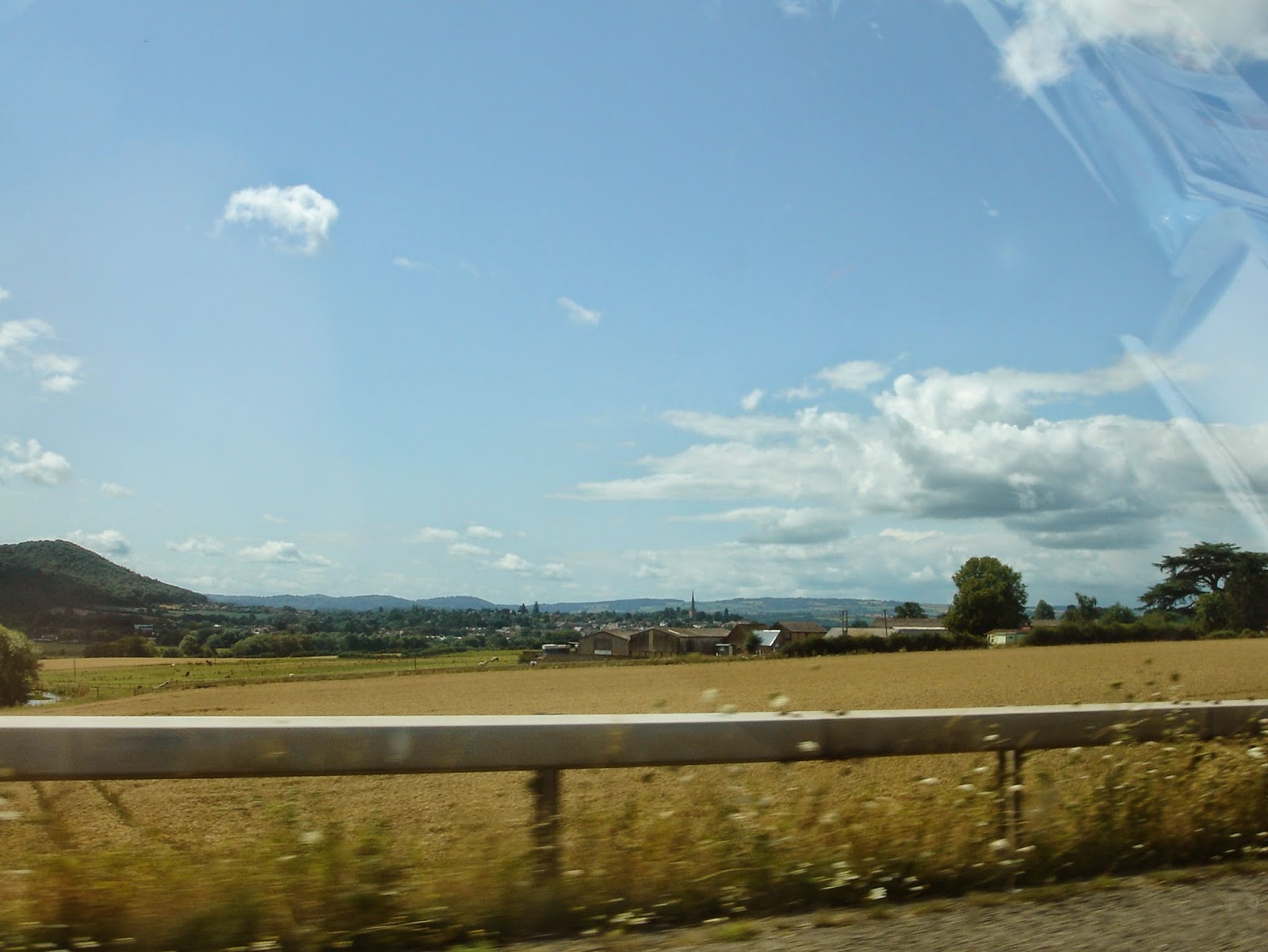 ...then bypass the town and take the narrow turn into Goodrich, cross Kerne Bridge...
...and wind three miles beside the river to the T-junction at lower Lydbrook. Except last weekend, as for the weekend a fortnight ago when we gone down to inspect... 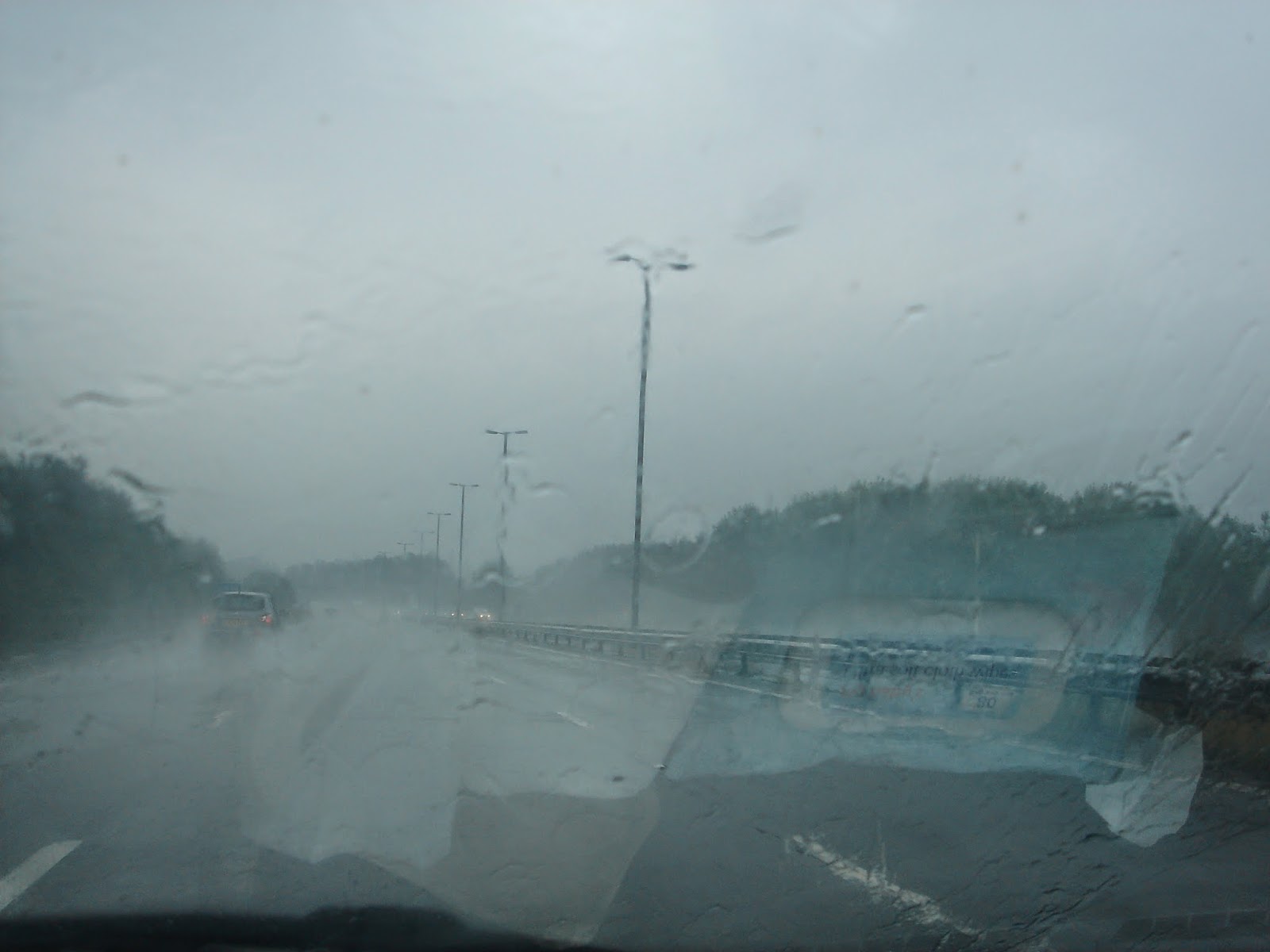 ...the weather was dire; Lin's car was overheating; and we were rowing. I'd even thought that perhaps we should just put the place up for auction. Get it off our backs. Lin wouldn't hear of it but both of us dreaded taking on the task of recovering the cottage from five years of expensive neglect. I pay full rates. It didn't help that the builder we thought we trusted had left the central heating on at the start of last year and cost me £700, and worse had done work for which we'd paid that turns out not to have solved the problem of 'water ingress' that keeps one of the bedroom ceilings and end walls crumbling. Our builder - seemingly a decent man - working on the cottage between others jobs in ways that seemed to suit him and us - finally placed the straw on the camel's back by installing new windows that were entirely against Lin's most detailed specification - ones that half opened when we wanted them fully opening and didn't fit anyway suggesting he'd off-loaded a job lot.
"Lost in translation" was his excuse.
We parted company after he had removed all the bathroom plumbing adding the final touch of complete uninhabitability to the beloved place.
This last year I did something about the encroaching trees, paying Dave Kenworthy of Evolution Trees, - after Lin and I had spent an August weekend doing some clearing with scythe, saw and loppers - to remove tall ash trees too risky for us to fell, threatening the power line to the house, and cut it up as firewood.  Dave is good; instant phone and email communication; transmitting photos of his work; easy to pay; transparent, professional and conscientious. He also found us another builder who checked over the cottage.
There are troubles continued; not through incompetence or dishonesty but cost. Shaun, Dave's builder, said the cottage roof needed entirely relining and parts replacing. The cost of going up and down Bell Hill, along with scaffolding, gave us a bill that, on top of what we'd already paid the previous builder, was depressing. I phoned Shaun. I apologised for his trouble. I said we were thinking of washing our hands of the place and going to auction. He returned our keys.
Last hope. It's always unfair and probably unwise to lean on friends for favours but we shared our worries about Rock Cottage with Martin, and family, Sandra and Adam...


We've all known each other for the greater part of our grown-up lives, and seen each other's children grow up.
Two weekends ago Sandra got to the pub bar before me, and paid for a lunch for us all at the Courtfield Arms in Lydbrook. We'd promised to take them for lunch as part of 'a conference on the cottage'. It was grey and wet. The cottage was wet and messy inside and out, smelling of neglect. Yet a sun came out on our apprehensions. Sandra and Martin know the things that Lin and I row about, and Rock Cottage can be a particular focus of strife between us.  Laying a figurative had on our shoulders, Martin was terse; decisive.
"Clear the ground floor so we can get the kitchen and bathroom back to work. Hire a skip and clear the pile of rubbish in the garden and anything you want rid of in the cottage"
The windows could be sealed but left for the moment, ditto the problems with the roof "but it must be sorted if possible before the winter. Adam will help with lads to load the skip"
We agreed that work start on Saturday 2nd August. Lin and I would go down beforehand to start the process of deciding what should be kept and what discarded. She and I were there by midday last Wednesday - arguing most of the time. I wanted to take stuff and skip it, a total cleansing; clean break; tabula rasa. Lin doesn't think that way. We worked carting, carrying, cleaning, folding, wrapping, bagging - barely on speaking terms, as yet another load of smelly bedding material was bagged for me to carry down Bell Hill to put in Lin's car to go home for washing.
"Yes we may end up taking some of it to the charity shop but lots of this is good bedding!"
"If you say so"
A middle sized skip was hired - £198 - for the weekend from Bell Waste, permission given by Phil at Central Stores to place it, on Friday, just where we wanted at the foot of the path up the hill.
We rose early on Saturday to be in Lydbrook by 9.00am as agreed. It was forecast to pour, in the Midlands and worse in Gloucestershire. It did.
But on getting to the car park in Lydbrook a patch of blue appeared. Then Martin and, in a works van, Adam and his friend and co-worker Jack. They set to filling the skip. Martin went up to get the WC working and check the kitchen plumbing so the lads could stay overnight. Lin and I, talking carefully to one another, went up the hill to continue the work we were arguing about on Wednesday. 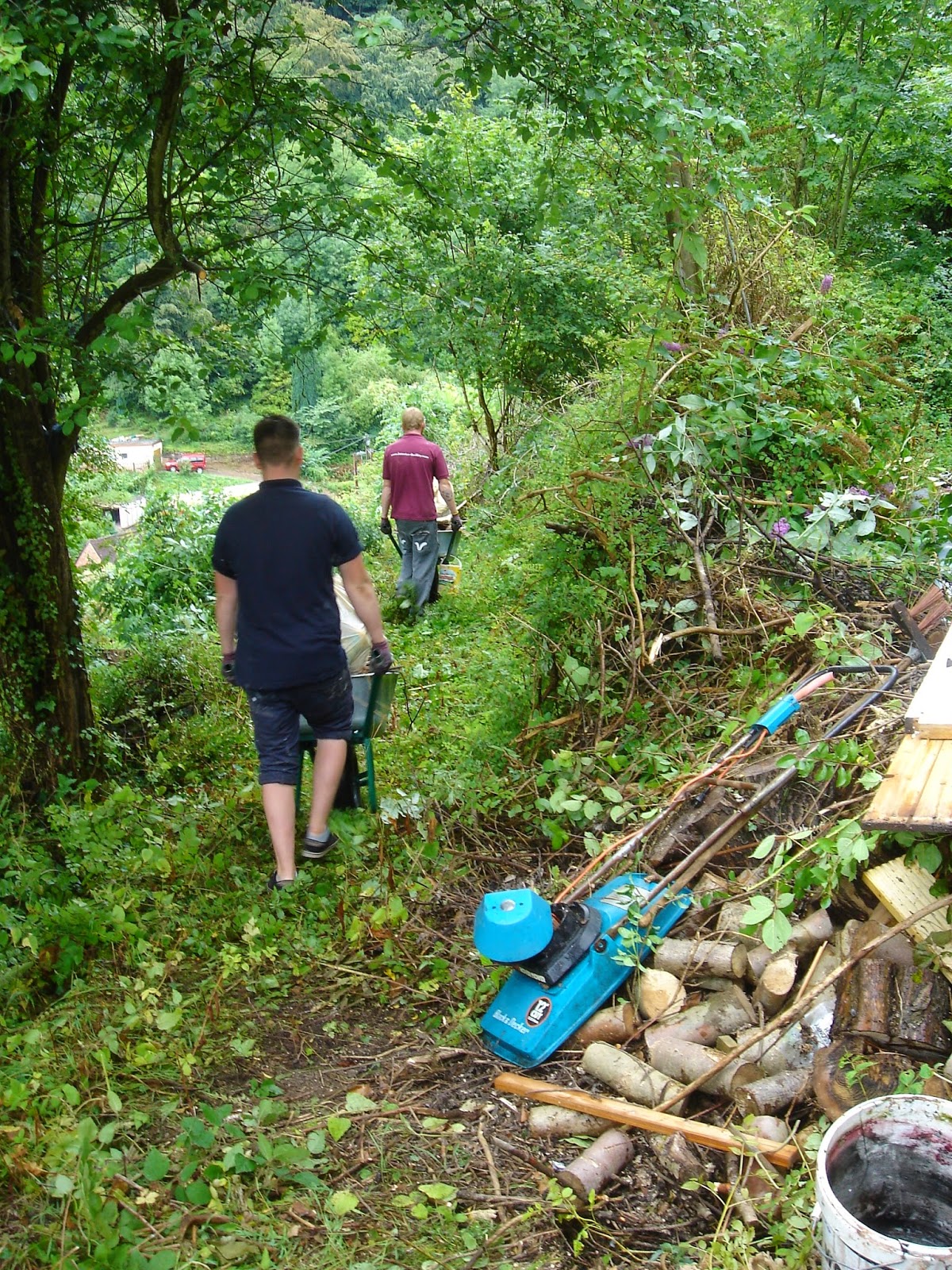 On Sunday morning Ln and I drove down again. The lads made us bacon sarnies -  brown sauce to add, which we ate upstairs, before continuing the sorting and tidying the garden including lopping a couple of branches Dave had missed, one lot already reaching towards our power cable. I laid in with my scythe, eating juicy blackberries from the bramble mounds. Note from Lin after the w/e:


Hi Martin, Thought you might like to see how hard Adam and Jack worked at the cottage - see photo proof attached. Seriously though, they were fantastic and worked really hard. I was so depressed by the last cottage visit and was dreading going down on Saturday, but we actually had a good time and made a lot of progress, so I'm feeling much more positive now. We're going down again next Saturday. Thanks so much for getting Adam to do this. Please will you give the boys an extra £10 each for a drink in addition to the £x each. Love Lin x 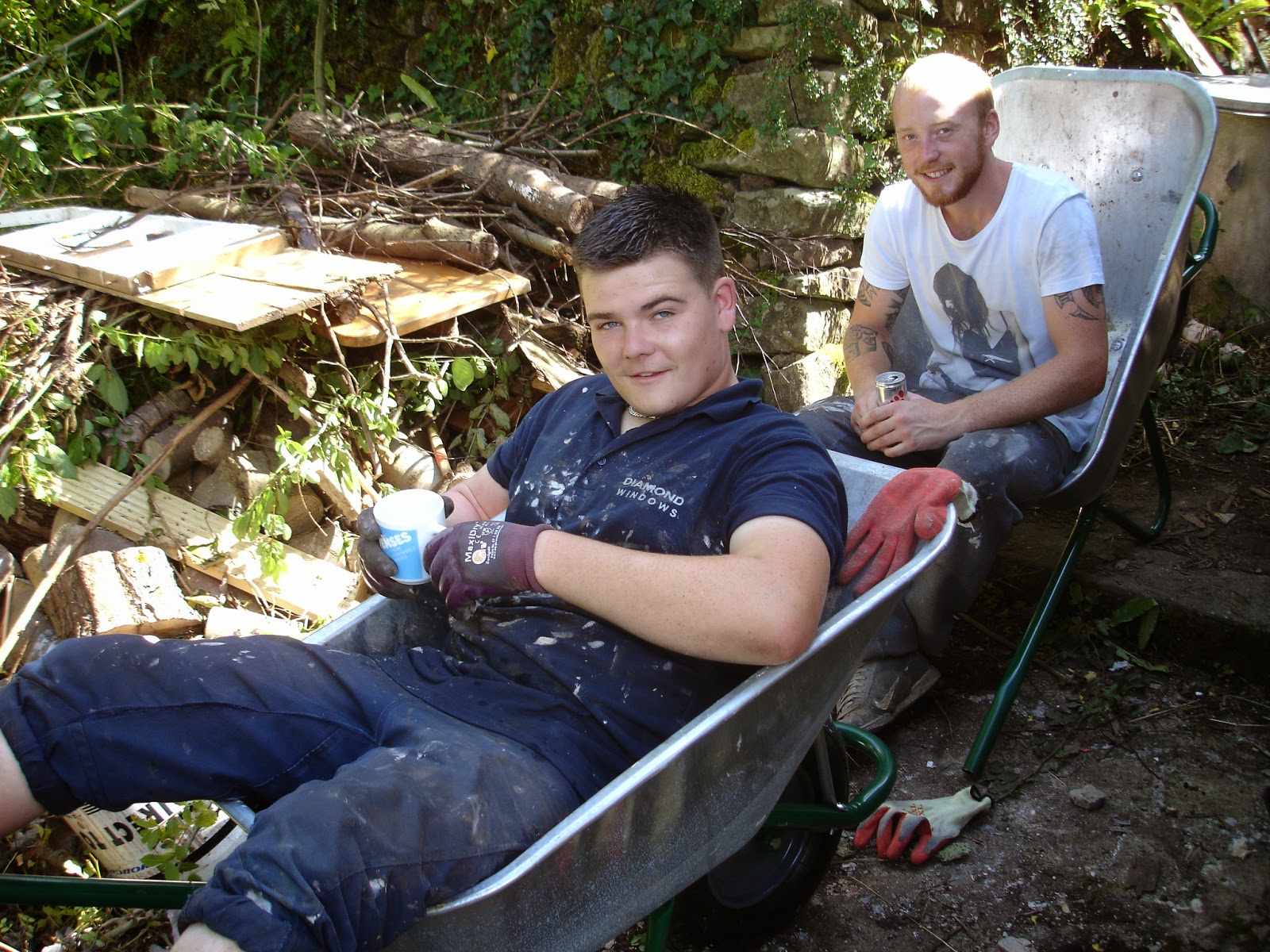 By Sunday late afternoon we were all tired. The skip was full and Adam and Jack are coming down next weekend and Lin and I are on speaking terms. 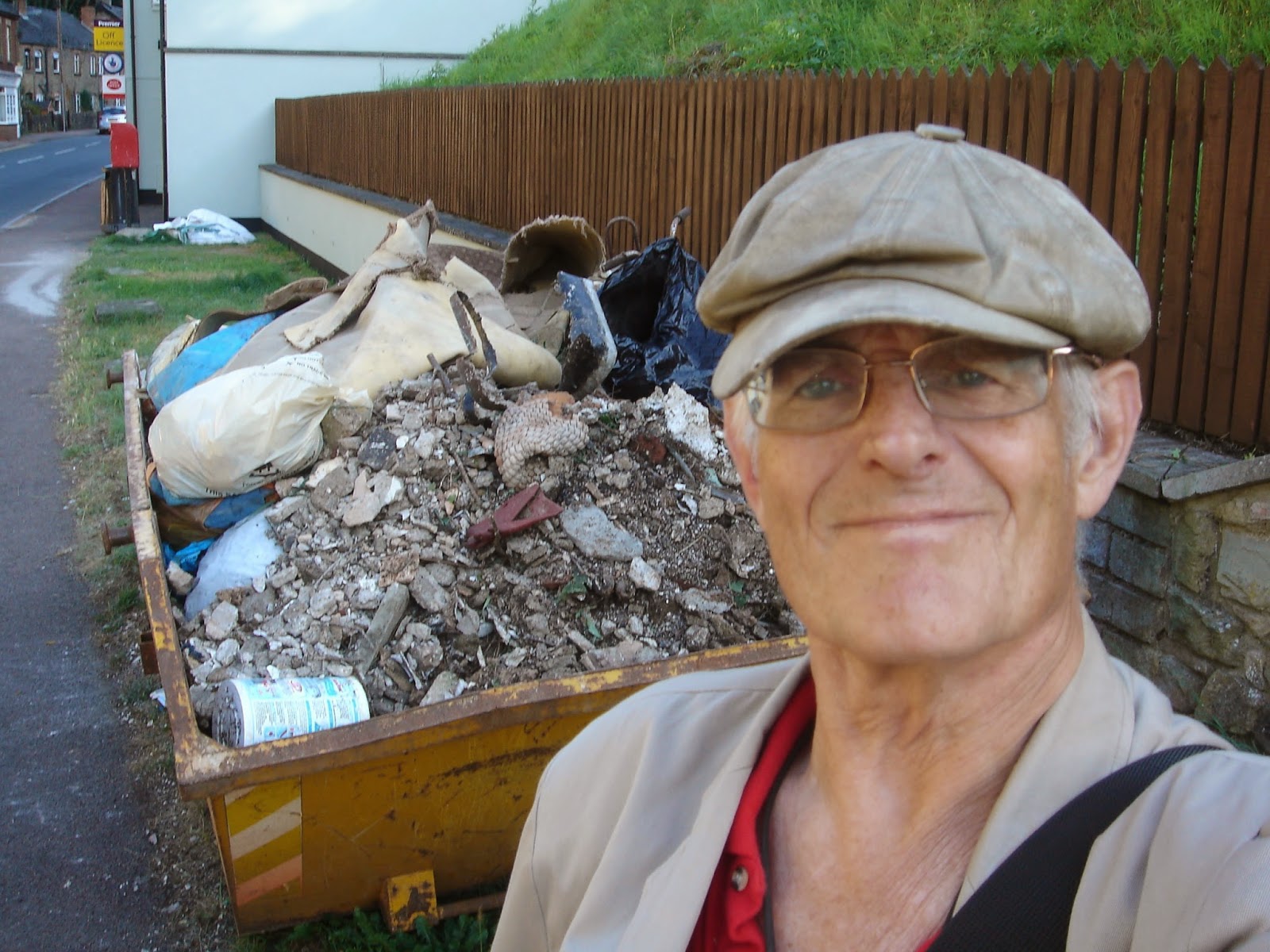