Richard Pine wrote, in one of his regular pieces for the Irish Times on 11 December:

I am sometimes asked whether the criticisms of the Greek system that I occasionally voice in this column are criticisms also of the Greek people. The answer is most emphatically "no”. It’s said that people get the government they deserve, but in modern-day Greece that is not the case.
The crisis of Greece is due to it having always been messed around politically by the major powers, and being subject now to the international expectations and persuasions in the EU and the financial marketplace. It is not due to the people, any more than the Irish banking crisis is the fault of ordinary Irish people.
While Greece may solve its economic problems, it has made scant progress on the systemic issues of social provision, in particular health and education.
The schools are a shambles and the universities are chaotic. The somewhat primitive education system may have been adequate when Greece was backward and marginal, and had only a minor role in international affairs. Today, with the expansion in curriculums, diversification and specialisation in university faculties, and the pressures of the market place, this isn’t good enough.
School-leavers deserve a university system which is transparent and offers both hope and opportunities. Most young Greeks, like their Irish counterparts, are not content with the old ways: they want to acquire skills and reach new horizons. The education system stands in their way.
Even when they graduate, however brilliant they may be, employment commensurate with qualifications is almost inconceivable. The best prospect is emigration, usually to Britain (40% of emigrants), Germany (16%), Italy (16%) and north America (5%).
Emigration by graduates is lower than in Ireland or the Baltic states, but only 16% of graduates working abroad would contemplate returning to Greece. About 46% of PhD-holders earned more than €60,000 abroad, more than twice their equivalent in Greece. The main subjects for emigrating graduates are economics and business studies, law, computer science, physics and chemistry.
Of the 'free' secondary school system, one newspaper, Kathimerini, said: 'It’s not free and it’s not education.' The annual budget for education, pre-austerity cuts, was €6 billion or slightly more than 4% of gross domestic product. This is insufficient to enable schools to meet modern standards. The worst affront is the fact that teachers direct pupils to the crammers where they work out of hours, the frontisterio - φροντιστήριο - 'tutorial college'.
Teachers earned a pre-cuts average salary of €30,000, making the frontisterio industry an essential extra cash-earner. There are an estimated 3,000 crammers, to which anxious parents are paying an annual total of €1.6 billion, or €200 per month per family. It has been described as a form of kleptocracy.
It was expected the frontisterio system could be eliminated by extending the school day, which until last year ran from 8am to 1pm; it now ends at 2pm, with provision for a further two hours’ study time, for which teachers are paid no extra. But the frontisterio still flourishes: in fact, it is mandatory if you want your son or daughter to get into university.
One result of the austerity measures has been non-replacement of retiring workers. About 23,000 teachers retired in 2011; the government could afford to replace only 3,500; the worst-hit are the disabled and those with special needs.
In 2010, the then prime minister, George Papandreou, pledged to “fundamentally change the way Greek pupils learn and teachers teach”. Attempts to honour that pledge by his, and the current coalition, government, have met opposition from the unions, because they believe the reforms won’t achieve any real improvements.
The most extensive reforms envisaged include revamping school teaching methods, coupled with abolition of the existing Greek 'Leaving Cert' and the points system of university entrance. At present, 50 per cent is required in their Leaving Cert for university entrance, but 20 per cent of school-leavers failed to reach this, with over 60 per cent failing history and maths. Greek schools rank 28th out of 31 countries measured by the OECD for literacy and maths.
Universities are not amenable to a system of control, despite efforts at reform. Universities have to be autonomous and yet responsible. That balance has yet to be found in the Greek system, which is impenetrable to the rational mind. There are 19 universities in Greece, plus 16 technical colleges, with a lecturer-student ratio of 31:1. Three Greek universities are ranked in the world’s top 500, at 193, 226 and 338. Five more feature in the range 500-1,000. Greece ranks 118th in the world league for university efficiency.
It’s essential the schools and the universities are reformed. But the two problems seem to be intractable. Greece is still struggling to find its way in the world, trying to decide how to educate its young people.

*** ***
An unsigned article a few days ago in Macropolis:

The percentage of people living in Greece who are at risk of poverty rose substantially last year and almost a quarter of the country's population now falls into that category, which is the highest proportion in the European Union. Understandably, the plight of the worst off in Greece often grabs the headlines. But it is easy to overlook the fact the crisis is pushing more people who once had reasonably comfortable lives to the margins of society. The new data, which excludes the most socially vulnerable such as homeless, irregular migrants and Roma, leaves little room for doubt that this process is well underway. According to the latest figures from the Hellenic Statistical Authority (ELSTAT), 23.1% of people in Greece were at risk of poverty in 2012. This is compared to 21.4% in 2011 and 19.7% in 2009, shortly before the crisis broke out. In total, 914,973 households and their 2,535,700 members are considered as being at risk of poverty. The poverty threshold is considered to be €5,708 per person or €11,986 for each household that has two adults and two dependent children under 14. The risk of poverty threshold is 60% of the median of the total equivalised disposable household income. The worst-affected groups are single-parent households with dependent children, two thirds of which are at risk, and unemployed males. Just over 52% of men without jobs are at risk of poverty, along with 26.9% of children under the age of 17. However, the threat of hardship also affects those with work. More than 27% of Greeks with part time work are considered to be at risk of poverty, while the same applies for 13.4% of those with full time jobs. Without social transfers, almost half of Greece's population would be living at risk of poverty. It is worth noting, though, that social spending has been cut considerably over the last few years. According to the 2014 budget, social transfers were reduced by 6.8% between 2012 and 2013. They are due to be cut from about €17 billion this year to just under €14 billion next year – a cut of more than 18%. When the element of social exclusion is added to the data, the results become even more worrying, as 34.6% of the population was considered to be living at risk of poverty or social exclusion in 2012. When these two categories are combined, Greece has the fourth highest percentage in the EU, behind Bulgaria, Latvia and Romania. When only the "at risk of poverty" rate is considered, Greece ranks first, half a percentage point ahead of Romania in second at more almost three times the rate of Iceland, which takes the last place with 7.9%.

**** ****
I like these early morning starts. Alarm goes; reset it for a few hours later for Lin and descend to the kitchen for tea and to dress, then out into the chilly lamp-lit dark to cycle into town...

...for a morning meeting in Mayfair... 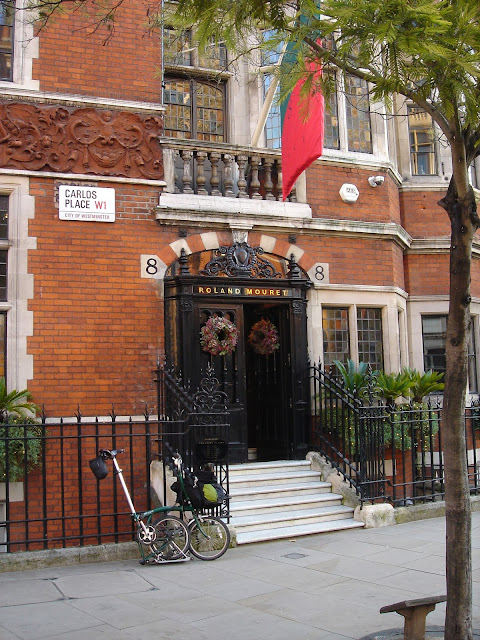 ...a visit to Battersea to have one of my older Bromptons serviced at Phoenix Cycles ("You might as well sell it" said Mike "for what a proper service with replacement handlebars and wheels will cost" "Just tighten up the gears and renew the brakes then") before taking a taxi back to Dukes in St James Place... 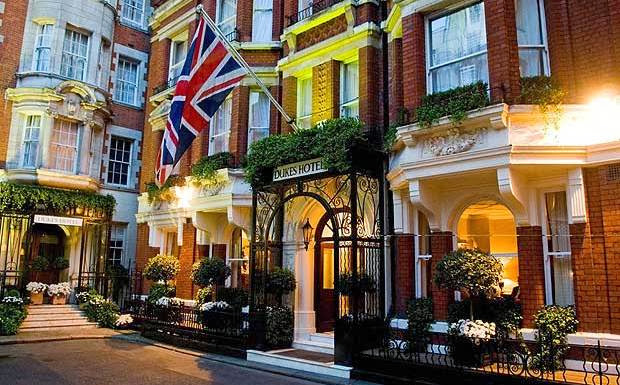 ...for a long lunch with an enduring friend. We drank an aromatic Stellenbosch for Mandela and argued about why some people have such a gift for making their allotment successful.
"It's a family association with the land" I claimed
"No. It's about enjoying preparing food" said Ziggi.
Back in another taxi to fetch the bicycle, and a swift ride for five and a half miles back across crowded London to Euston.

I was home by 7.30. I tried to share my day but she's unpleased with my inability or is it unwillingness to get stuck into preparing the house for Christmas, inventing urgent contingencies to evade domestic responsibility; instead doing work with Handsworth Helping Hands... 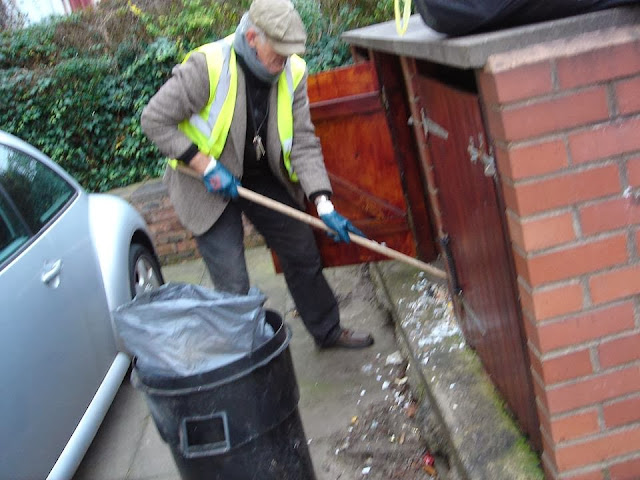 ...and pottering on the allotment where as well as admiring Taj's digging and shed tidying... 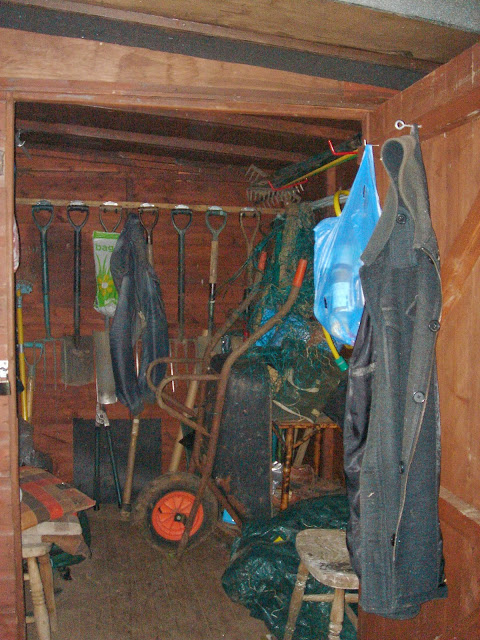 ...I've harvested some of my Jerusalem Artichokes... 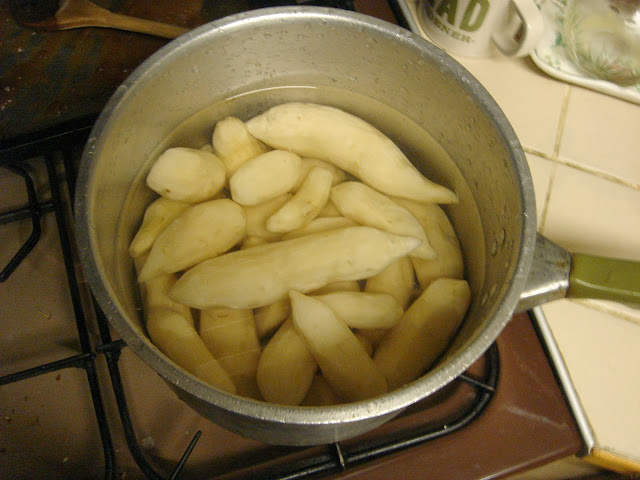 ...and having cleaned and pealed them into salted water planning to sauté them with garlic and Bay leaves and see what they're like.


**** ****
In Ano Korakiana, where we shall be soon - celebration at the church of Saint Spyridon half way along Democracy Street: