Richard Pine has circulated his latest 'Greek letter' in The Irish Times but writes:


I have been unable to create a link to my column in yesterday's Irish Times (Wednesday 18 September). I am therefore sending it in the body of this email. The brutal killing (by stabbing) of an anti-Nazi rap artist, Pavlos Fyssas, by a member of Golden Dawn last night has raised the 'hate' and the 'fear' stakes even further. If you do not wish to receive copies of my future columns, please notify me and I will remove your name from the distribution list. Sincerely Richard Pine

Wed, Sep 18, 2013, 01:00
First published:Wed, Sep 18, 2013, 01:00
Given the low opinion held by most citizens of their political leaders, and of international institutions such as the EU and IMF, it’s astonishing that we seem to cling to the concept of democracy – especially in Greece, where the word was invented – to describe government of the people by the people. Today it’s all up for questioning, including the composition of the nation state.
There is a significant gap between our faith in the concept of democracy and our suspicion of the democratic process which produces people we cannot trust. A mismatch between the ideal and the real, including the operation of the civil service, the clientelist system and the passing of parliamentary seats from father to son – or daughter – a not unknown phenomenon in Ireland.
Do we distrust our fellow citizens because we fear that, as soon as elected, they will turn into powermongers, the political equivalent of werewolves or Frankenstein’s monster? In Greece we have a democratically elected parliament and a government appointed under the terms of the constitution, rejected and abhorred by the vast majority of voters.

Extremism
Plutocracy, oligarchy, autocracy, monarchy (all words with Greek roots) have their supporters, and even fascism (definitely not of Greek origin) has a hold in modern Greece (as reported in last month’s letter) although, as the third largest political party in the opinion polls, Golden Dawn is still not yet the overwhelming popular choice, but may have a very significant stake in the next parliament, with 14 per cent of the vote in current opinion polls.
But there is another Greek term gathering momentum today: anarchism. Many citizens, disenchanted with the political system which they regard as having failed the state, have turned their backs on politics and, instead, advocate lawlessness and, at its most extreme, tearing down political and social structures by terrorist means. The group Conspiracy of the Cells of Fire (one of the most successful) describes its mission as 'urban guerrilla warfare'.
I am surprised that the Greek indignados (who made such a dignified, peaceful process in Athens’ Constitution Square for many weeks in 2011) have not re-emerged during the latest crisis; some of them are merely disenchanted with all forms of protest, but I expect that many, more aggressive types, are actively pursuing the anarchist option.
At one end of the spectrum is the fascist Golden Dawn, burning synagogues and mosques and beating up migrants and gays; at the other are the various terrorist groups, the latest of which calls itself Untamed Desires, which sounds more like the title of a porno movie than a bunch of arsonists and bombers attacking civil servants, lawmakers and judges. 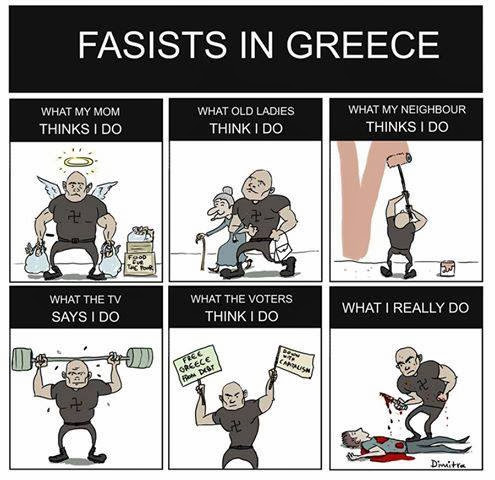 Back to the future - 23 Sep'13 Nightmare on Democracy Street by Nick Malkoutzis on Macropolis
***
Just driving dully along I catch people on the beach at Ipsos enjoying their holiday in the sun. 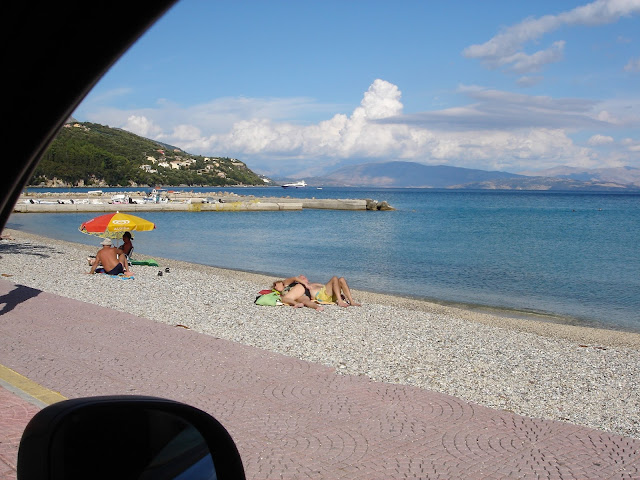 Κι εγώ. In readiness for the wind vane removed from the roof of Brin Croft and due here by carrier at the start of next month, I've attached the iron bracket made for me by Steve Lee to a corner of the house. I bought five 9 inch coach bolts and the largest rawlplugs I could buy; dug out a metre length chunk of wood recovered from the beach and rejected as too good for the firewood in the apothiki, and drilled five holes in it. On a stepladder I offered the beam to the wall and, through the holes in the wood, drilled five marker holes on the mortar, then using my SDS drill followed these with five deeper holes in the stonework of the house. I filled these with a dollop of strong glue and then, with the coach bolts through the beam, and the rawlplugs lightly screwed on the end of each, offered the whole to the wall and tapped it home, until I could place a bottle spanner on each coach bolt and tighten. 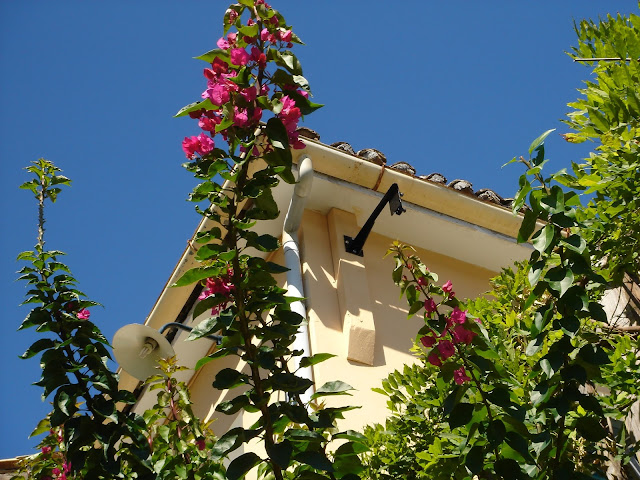 I painted the wood, now tight on the wall, to match, and with a spirit-level positioned Steve's bracket, its end just beyond the gutter, pointing as vertical as I could make it. I gave it a couple of coats of rust resistant black gloss before using four four inch coach bolts to fix it firmly ready for the vane. I shall need a compass to find the north, or perhaps use the north star, or the wind vane on the church a few yards down Democracy Street.
Posted by sibadd