The wind vane on Brin Croft 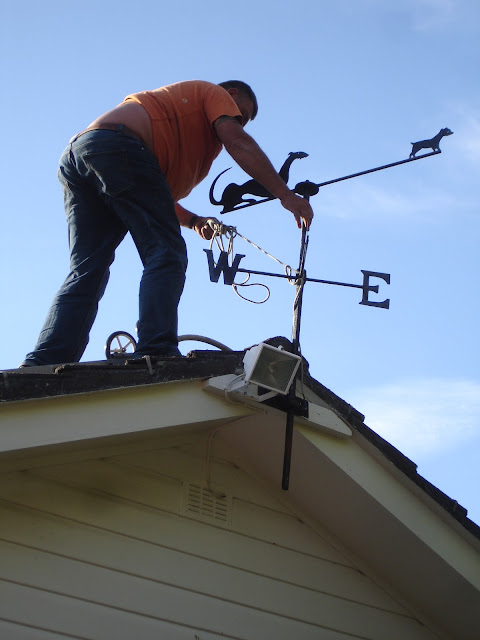 James, Isobel’s son-in-law, roofer, got astride the ridge of Brin Croft and tugged at the iron wind-vane, already loose in its bracket, until it pulled free. He lowered it to me on a washing line.
“Do you want the bracket as well?”
We’d tried – Colin, with a good socket wrench, and I with a mole grip – to loosen the bolts on the bracket; treated them several times and weeks ago with WD40.
“No, just leave it, James. Those bolts are too well rusted”
“It’d come off with an angle grinder”
“Too many sparks next a wooden house”
I’d thought of a blow lamp. Hot and cold, Hot and cold; brought one up from Birmingham.
“No way!” Lin had said
“So take a photo of the bracket with lens on zoom. I’ll have another made.”
We wondered where to put it; this vane with the sheet metal initials E, W, N, S on the fixed plane and above it, to turn with the wind, a Jack Russell called Sukie and a whippet called Jenny – dogs we had as children when a Newbury smithy made this up for the roof at Bagnor.
“Where shall we put it up again? In Handsworth, in Lydbrook, in Greece?”
“Where?”
“How about a bracketed metal pole that reaches 8 feet above the seaward balcony to mark, where we can see it easily, the changing winds that blow across the village.”
“Can you get a wind vane all that way? How do you pack it?”
Clearing Brin Croft. Lin’s already done a good job, staying up most of Thursday night wrapping and boxing and packing, protecting the sharp edges of the vane with envelopes of cardboard; doing the same with a pair of antlers for removal by Dunne's to Birmingham, but all the way to far Greece and fair Corfu, up the Sidari road turn left to Ano Korakiana a mile beyond Doctor’s Bridge, wind down past the chickens and guinea fowl on the left and the goat-sheep grazings on the right, then up the hill to Democracy Street where other drivers will civilly wait in the narrow space between houses while our van’s unloaded.
“With the chests of drawers too - drawers full of other useful stuff”
This disassembly and dispersion is another part of the ritual of mourning and remembrance. It’s perhaps why after a death, offence can seem so trivially taken among survivors who surprise even themselves, not, as often surmised, through cupidity or covetousness, but through differences over something sacramental, umbrage over observance; matters of faith; worse - theology. Isn’t religious strife the most obdurate cause of war? Mum’s chattels become her diaspora – though some are made anonymous by sale and auction, memorialised in ordinary use by friends and relatives. The market doesn’t figure. It’s their association. Lin has packed a semi-opaque plastic tooth mug that Amy remembered “when I was brushing my teeth at Mains”.
Other things formally priced for probate have gone to auction at Dingwall – two full vanloads - and Roger from Auldearn Antiques packed his blue transit with things he values more than any of us. 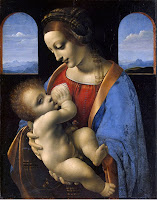 One aside in chat with Roger...he'd advertised some prints on ebay, and been refused permission to show Da Vinci's Virgin and Child because of concerns not to depict infants unclothed. Hm? Context?
Two most pleasant blokes – one of them older than me, drove up from Scarborough in a yellow transit – and filled it with mum’s disability gear...

...paying just over a thousand pounds for things that cost mum new nearer ten thousand. It had taken Lin weeks on Gumtree to find anyone prepared to pay anything for these – a mobility scooter, mechanical bed, mechanical riser and recliner with remote control, a lightweight folding wheel chair, all terrain walker, ordinary walkers, a commode, a bath lift, a Pilates leg exerciser, numerous gadgets for twisting and lifting. Isobel at Inverarnie Stores has pointed customers up to the house, one to buy a freezer – the driver of the Strathnairn bus for the elderly who had a ready lift to keep the machine upright.

Others have come and bought from the inventory. No large objects remain. Lin and I eat on a couple of old garden chairs and an ugly little MDF table rejected at auction. We sleep comfortably on a remaining mattress. 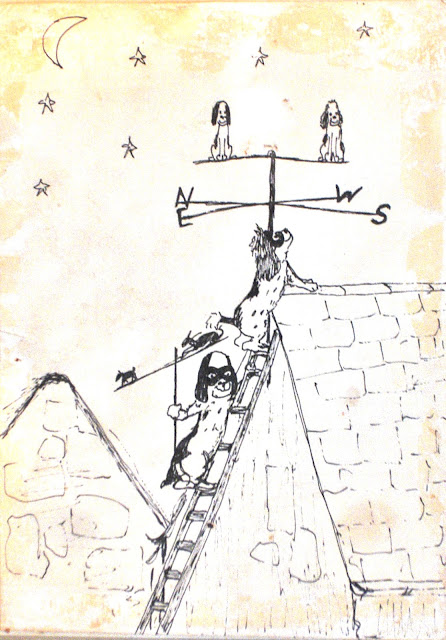 Two friends - nurses - one with a talent for cartoons and caricatures, stayed at the cottage attached to Mains of Failie in the late 1970s, when the wind vane I've removed from Brin Croft, stood on the roof of mum and Angus' shippen, a victim of mischievous spaniels. 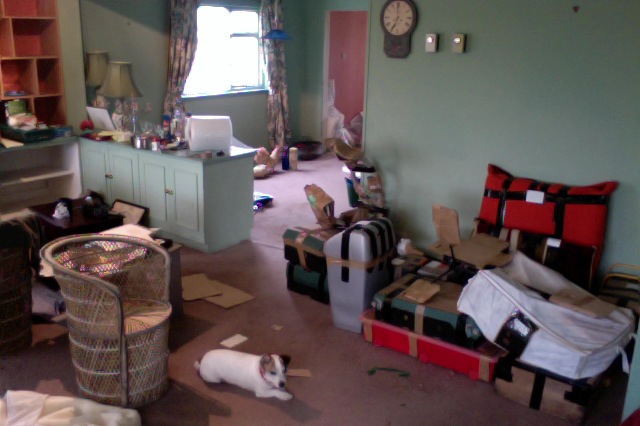 In a recent opinion column (‘Greece in crisis needs a public broadcaster’) I made the mistake of saying that ERT, the Greek public service broadcaster equivalent to RTÉ, which had been shut down by the government, was back on the air. I wrote this in good faith. Faith that the Greek supreme court, which had ordered the reinstatement of ERT, would be obeyed by the prime minister, Antonis Samaras. However, I had not allowed for the fact that Samaras had engineered the closure of ERT for many reasons, one of which was to test the water of what he could or could not do in respect of closing or radically changing a number of public bodies, for which ERT has provided the test case. Ordered by the supreme court to reopen the broadcaster, pending a review of its activities and a likely reduction in both its staff numbers and its budget, Samaras has chosen to behave as if there had been no such order, just as he has proceeded with the suspension of ERT as if he had a single-party government, rather than a fragile coalition. Not only this, which has dismayed the Greeks, who are hard to impress these days with arrogance of this magnitude, but Samaras has also defied international opinion.....(continued)


...Something to ponder. You know I have been 'predicting' that LAs are heading for insolvency. £14.4 billion in the red. Add to that anything between £30-50 billion shortfall in NHS by 2021. I think it is time to take stock. Today Detroit City in USA have filed for bankruptcy. This was the centre of the American Motor industry in the richest country on earth. If it can happen there it can happen anywhere. Time for LAs to wake up and smell the coffee. Sadly they are far from doing this. This was a comment made by observers of the recent LGA conference re local councils: 'The magnitude of the cuts themselves provoked very little reaction and local government was very much business as usual – which is sadly why it will always be burden with such a large share of the responsibility to reduce public spending' - LGC 11 July. Hoisted by their own competence and compliance on the flagpole of political naivety and ostrich attitudes. This was after being harangued by Pickles to the effect that there was not a hope in hell’s chance that the recommendations in in the LGA Rewiring Public Services report would be accepted. He called LAs 'Luddites' creating 'Groundhog Days'. I need a holiday! Enjoy the summer. See you in the autumn.