A few days ago we arrived at mum's old home, late but in the long light of the Highland summer. Since then, but for walks with Oscar, it's been work, including composing a letter to the local council to claim exemptions from council tax that ought to have been accorded, but for complicated reasons, have not. The letter with redactions to protect innocent and guilty:


Dear Sir or Madam
Re: Brin Croft, Inverarnie, Property No.**
On Wednesday 12 June I visited the Highland Council service point in Inverness, having just arrived to arrange the clearance of my deceased mother’s house at the address above and finding a council tax/water charge bill for £1650.24 for the financial year 2013-14 and also a ‘final notice’ for the bill. A very helpful council officer, Mary, took details and advised me to write to you to request your assistance in obtaining the council tax discounts to which I should be entitled.
My mother, Mrs Barbara Burnett-Stuart, passed away on November 1st, 2012, but, for reasons I will explain, the executors’ exemption was never applied. As this gets quite complicated, I will give the details in note form.

Mrs B****n has informed me that during her time at Brin Croft she phoned several times and wrote to the Highland Council twice regarding the council tax issues, but nothing was resolved.
As you can imagine, trying to deal with this has added to the upset and stress already caused by the death of my mother and sorting our all her affairs.  The letter sent with the bereavement form on 12 November 2012 expressed deepest sympathy and stated “Council Tax is charged on a daily basis and in the changed circumstances it is important to ensure you receive every possible discount to which you may have become entitled.”
In effect the only discount which has been received was inappropriate, being a “second home” discount in the wrong name.
Mary at the Inverness Service Point was of the opinion that problems had all stemmed from the account being mistakenly changed into Mrs B****n’s name from 15th November 2012, resulting in two accounts being issued, instead of a single account, from November 1st 2012, in the name of the Executors of Mrs Barbara Burnett-Stuart.
The original account was:
67-****-12 Mrs B Burnett-Stuart
A new account in the name of the Executors of Mrs B Burnett-Stuart should have been opened from 1st November 2012 when she died. However the new account was opened in the name of Mrs E B****n from 15th November 2012:
62-****-12 Mrs E B****n
When Mrs B****n left our employ at the end of March 2013 the new account was opened in the name that should have applied all along:
67-*****-13 Executor of the Late B Burnett Stuart
In order to right matters, I am making a request that the records should be changed to reflect the council tax responsibility of the Executors of Mrs B Burnett-Stuart from November 1st 2012, until such a time in the future as the property is sold. I also believe that the following discounts should be applied:


1. 25% single occupancy discount from 1st  November 2012 to 31st March 2013, when Mrs B****n was employed as caretaker by the executors, due to circumstances beyond their control.
2. Executors’ exemption for the six months, starting 1st April 2013, or until the property is sold, should this be earlier than 30th September 2013.

I must say that I have been both surprised and disappointed at the way this has been dealt with by the Highland Council and hope that this can now be redressed.
I will be in the UK until September and look forward to hearing from you in due course at the above Birmingham address. If necessary, I can also be contacted by phone on 0121 *** **** or by email at ***@****.
Yours faithfully
Simon Baddeley

"You know" I said to Lin after hours working on this letter - entirely her work - printed and posted by me this morning, also emailed as an attachment to the Operations Manager of Highland Council...
"I can sometimes see the attractions of corruption. Instead of writing this long complaint and petition I could pop down to see a 'friend' in the council and with a swift φακελάκι the whole ruddy mess would be sorted in minutes."
It's strange to be without phone or wifi, but a good test too. We can get a weak mobile signal from a slope at one corner of the garden, but to work on the internet and phone we're buying coffee and biscuits in a 'free wifi' hotel overlooking the river Ness in town.
Colin came round to strim the long grass that's grown around the house since mum died... 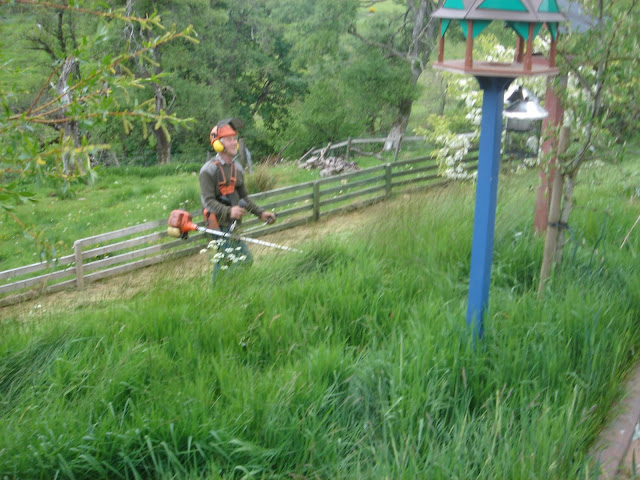 ...and I've done weeding and pruning and sweeping and clearing - but there's more to do. Our main work's indoors where we have to have the house cleared so as to put it on the market, all items inventoried and accounted for, with some to be kept, some sold, some given to charities.  For some things, transport costs could be higher than the sale price, unless we do our own carriage. One quote we had for the journey to a sale in Edinburgh started at £600. There's an auction at Fraser's at Dingwall in mid-July, so we're creating an 'auction' pile and planning to hire a drive-yourself van. Other items are, though not especially valuable, likely to do better if sold on eBay or Gumtree or taken south and sold at auction there. We may be able to borrow a van for that and so more could be paid to beneficiaries. So there's a 'going south' pile. I'm taking a load of mum's books that none of us wants to Leakey's in Invemess. What they won't buy will go to the charity bookshop over the road. Lin's putting mum's extensive disability equipment on Gumtree, after disability companies told me that you cannot sell these things second hand to public companies or charities - those who perhaps most want it. "Too many ifs and buts about safety, especially for electrically powered items". I suspect we may end up giving away a lot of very expensive kit in good condition and I as an executor will need to justify this.
My grief for mum is placeless. Thank goodness. This work is tedious and often frustrating, but I get not the slightest sense of mum's having been here. She's left no presence. That's all in my head wherever I am and in my DNA. She made the places she lived, and when she left them, in this case in dying, they cease to be part of her. What's her is not material, not in objects or sounds or even smells. It's all in my head and heart. So Lin and I are together here, surrounded by objects that carry no charge.
I take Oscar for familiar walks but no longer with the other terriers. He runs back and forth led by his nose, his tail wagging, happy as a Wordsworth child and as bored when stuck with us at home as we concentrate on the banality of probate.

*** ***
Ill news from beloved Greece - the planned closure of their equivalent of the BBC - TV and radio... a comment on the village website: 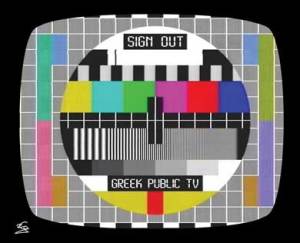