Somewhere over the centre of Europe I stopped feeling cold. In my cramped seat I eased off my jacket, leaving my polo neck jumper, thick shirt, heavy vest and, beneath my jeans, long johns. The sun was a fading glow on a plain of clouds spreading south east towards night. Lin fed me a crisp baguette with boiled bacon and mustard from the picnic she’d made before we left Handsworth to travel in an unheated coach to Luton through sunless landscapes patched with grimy snow. I read Margaret Youcenar's A Coin in Nine Hands, her 1959 rewrite of a novel she wrote in 1934, prescient about fascism, chaptered sketches of character, streams of thought and conversations; the domestic permeation of casual moral failures, each in itself, without the benefit of foresight, easy to discount, since a fuss - from any but the odd intellectual - would be disproportionate, displaying slightly deranged self-importance, making a scene.
I sipped very hot coffee served from the passing trolley, now and then snoozing, languid, enclosed in a muffled turbine drone; waking to adjust my growing warmth by twisting on the blowers above our seats. I leaned apologetically towards the stranger in the aisle seat to rise, unfolding myself to walk to the tiny WC. ‘Oooooff’ goes the powerful vacuum of the flush. I fiddle with a dolls house tap to wash, extract a tissue to dry my hands, click open the little door, process between a hundred fellow passengers to make another small apology to resume my seat. I turn my watch forward two hours. Our pilot announces we're crossing the sea from Croatia to Corfu, as the plane tilts through clouds.  Beyond the the brighter beam on our wing, tiny lights appear. We descend from the north, avoiding the circle over Mouse Island and Kanoni, gliding instead over Potamos Bay, low over Mandouki and the city maze, familiar streets passing swiftly below, our plane yawing in gusts from the brisk almost balmy south wind that streamed out our hair and coats on the steps of the plane... 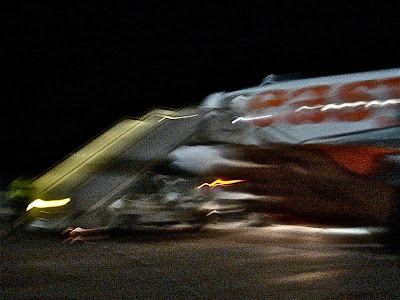 ...blowing sea spray over the road along the Garitsa esplanade.

“Hullo Corfu” said Lin as she drove by the floodlit Palace of St Michael and St George “It doesn’t feel like only a month away”
“We had lots to do. It’s so good to be out of the cold”
The airport was well behind us, its entry and exit familiar and easy; our car ready for us, Yianni helping load our bags.
“I might have offended Yianni” said Lin “comparing his prices with Fairdeal” 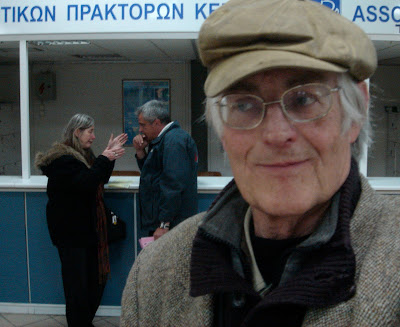 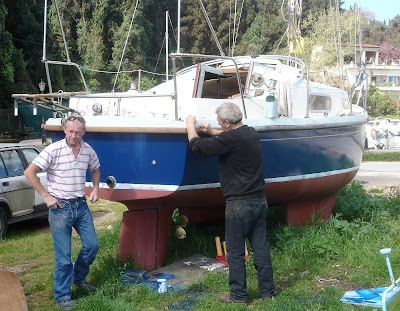 Dave made me a cup of tea – “Yes the stove’s reconnected with gas in the stern locker and electric pump for the sink tap." We sat in the cabin as he took me over next steps, renewing the cabin sole and roof, sanding and reshaping the teak strake, replacing the cockpit locker lids, painting the deck. I can hardly take this is in. We waited so long to make our boat workable again.
“We should have done this when we arrived in Corfu in 2006” I said.
"Except for the cost, none of this is real” I thought “and it won’t seem so until I’m at sea again.”
*** ***
As the sun persisted Lin and I went for a walk up towards Venetia, descending the steps at San Jacobo we met an old lady who picked some flowers for us to take to her friends Lefteris and Vasiliki “from Anastasia”. We chatted as we walked
“Spring is earlier here, but even here the weather's delayed it”
The oranges are still on some trees even if the olives are gone. The vines look dead but everywhere there are buds; sometimes tiny shoots.
“The Judas blossom’s the most visible but even that’s delayed. Look at the green on that tree!" 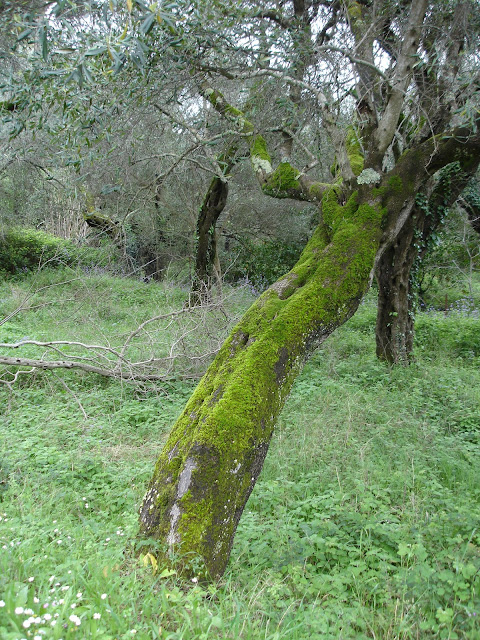 Along the lower road the puddles are wide. Soaking in warmth we stroll back into the village along National Opposition Street, no-one to be seen and only the rare car. There are often graffiti in the village, usually political - for ND, KKE, PASOK and now SYRIZA.... 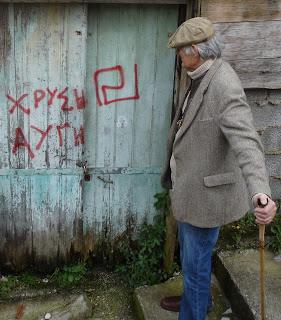 ...but on a wall below the road there’s a swastika sprayed in red and the stolen Greek key pattern symbol of the 'eggvolk' - Krysi Avgi, Χρυσή Αυγή, Golden Dawn, a pictorial anagram of the Nazi icon, and, to make the point, the initials AK, repeated on a circular roadside mirror at one corner for all passing by to see, and again on the wall at the start of the path up to our house.
“How can he bear to leave those there?” says Lin, nodding at the windows opposite
“They’re fresh”
From home she makes up a small tin of white paint. We put it in a plastic bag with a scraper and wire brush. 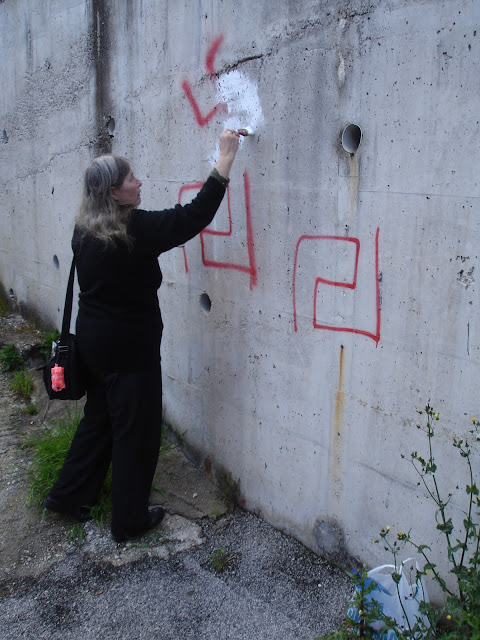 The grubby symbols are soon disappeared, even from the mirror though that takes a little more elbow, scrubbing and scraping and repolishing. 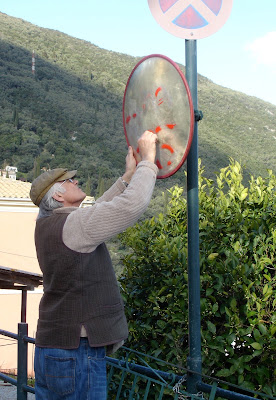 *** *** ***
Paul came round as promised to adjust the pressure of our water. Our dial read between 7 and 8.
“I’m surprised something didn’t blow. That’s far far too high” he’d said when we were here in February. He played with the sprung nut by the mains tap until the flow seemed right indoors.
“I’ve left it between 2 and 3 bar. See if that works.” 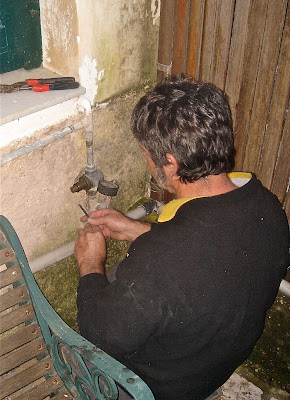 We’d been getting drips from the safety valves below the water heater whenever it was turned on.
“I think that’s sorted” I said after a while
“Say nothing” said Lin.
****

Wednesday was cloudy with wind and sun. I could put washing out and do odd jobs, in this case reseating a trio of cheap but sturdy wooden chairs, to which Effi has added a small bench she wants repaired. I’ve just taken it all apart, to be sanded and restored using glue on the joints and screws in place of its rusty nails. For this small task Effi brought over a gift - socks and a T-shirt for Oliver. 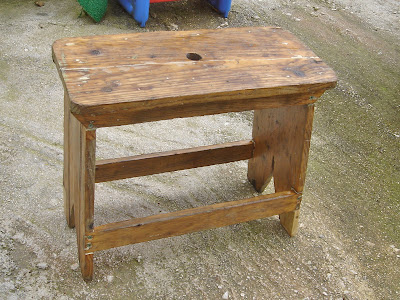 This is almost my favourite weather, regular intervals of sun through scudding clouds and now and then a louder gust of wind that lasts a minute churning up trees and flying out the washing, then quiet and a burst of heat as the sun clears a cloud. This is perfect ocean weather; endless sea shifting from azure blue to black; vast dazzling meadows amid ranks of perfect waves spumed by scudding squalls. Look flying fish! A shoal of diamonds skimming in panic across the blue; a covey of petrels like seedlings soaring between swells; and gliding above our swelling sails, the spike winged Frigate bird, at home on the sea, her world from horizon to horizon like Pentecost, filled with light and the sound of rushing wind and water. 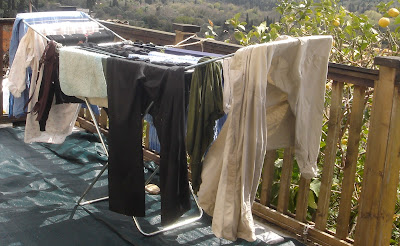