A letter from Connecticut


Dear Simon. Hard to believe that it has since before the election that I sent you any word of happenings here.  Such a sea change; it seems like one should almost demarcate it as the change of an era  "b.e." and "a.e." on the calendar!
Helen and I learned the results over the internet at our hotel in Argentina.  We were overjoyed and relieved as I think much of the world was. It would have been truly awful had the Repubs prevailed.  The victory was much more widespread than we could have dared hope. Here in CT the democrat Chris Murphy roundly trounced an almost perverted TEA Party type- a woman who owns a wrestling TV network and who spent over $100 million of her own money in her two attempts to become a US Senator.
Now we just have to get Obama to really stand up to the Repubs and we have to reform the filibuster rules of the Senate.  Obama seems to have much more spine these days although one can never be certain and there is a strong movement to reform the Senate that includes even the Democrat leadership.  So there is real hope.
H and I had a fascinating 2 wk trip to Argentina where we had never been before.  A vast beautiful and sharply contrasting country in the foothills of the Andes where we spent much of the time. Amazing highly colored rock formations where one can see plate tectonics played out in Technicolor.  Food and wine excellent and not just the superbly flavored beef one hears so much of.  Lots of excellent Italian food brought over by the Italian immigrants in the late 19th/early 20th century.
Since returning I have started a monthly philosophy dinner/discussion group with four friends.  Lots of fun and ANY topic up for argumentation.  Had a similar group in Washington before moving here.
We a getting ready for the crazy American Christmas season. It is a bit exhausting but it will be fun to gather with our children and splash down oysters with Loire wine.
So what is up with you and Lin?  I see Greece is into its usual troubles and the Economist says that GB may leave the EU.  Our best wishes to you for rambunctious holidays.
Much love to you both, Tony & Helen
PS we are planning a trip to Sicily in late spring.  I want to see the temple at Segesta most of all.  Have never been to Sicily so will be an adventure.  Probably won't make Greece this time but any chance we can lure you to this side of the "pond" in 2013?

*** ***
Tuesday morning Lin drove us into Inverness across Daviot Muir to Inverness - beside frosted verges and sparkling trees, ice melting from the wiondscreen. 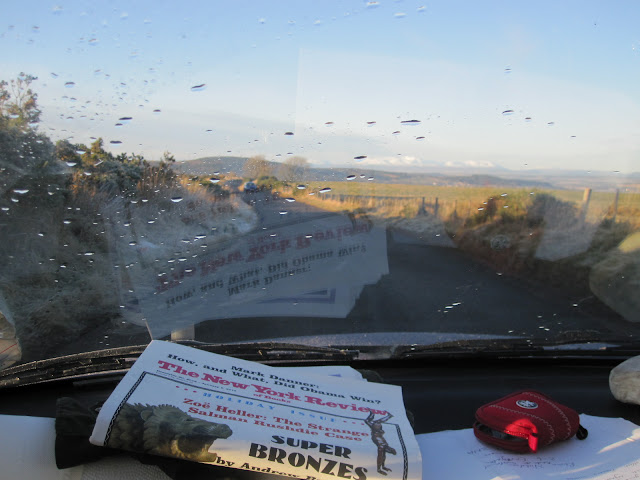 Ben Wyvis lay spotless white on the lip of our horizon as we descended the steep wind past Newton of Leys leading to the Culduthel Road to call on William T Fraser to collect the undertakers' bill before visiting Bank of Scotland with Mum's death certificate and Will to allow them to release cash from her account to pay. Probate rules allow this. Other equity is locked until the estate is cleared. We've been working to reduce outgoings on Brin Croft, while protecting the house from the elements and enjoying warmth in the sitting room. It's a small version of larger austerity policies.
On Sunday Richard went home. I returned him to the airport for the Sunday evening flight to Birmingham.
"Drive back via Mains" he asked. So I drove past the shop. over the Nairn, to turn north at Balnafoich down the long straight narrow road that runs parallel with the river towards Daviot - a road we've known for thirty years, driven, walked and cycled along it. A blunt ache - not left when her husband died in 2005, now untended even scruffy, but so recognisable for that sound of crunching gravel beneath our arriving tyres; there the blue painted door that was always open, and the dogs that scurried out barking.

"I may not pass this way again" said Richard, the dusk descending.
"Do you remember' I said "walking up this road beyond the drive to meet mum and me arriving once? We must have rung from a phone box near Perth and you children surmised our time of arriving and came out with the dogs to greet us. You'd gone up a week earlier on the sleeper."
I'm ill acquainted with grief. The main way I've thought to assuage my sadness, is not as one might try - impossibly - to quench the agonising grief of untimely death, like this I glimpsed on a note stuck to a motorway service station window... 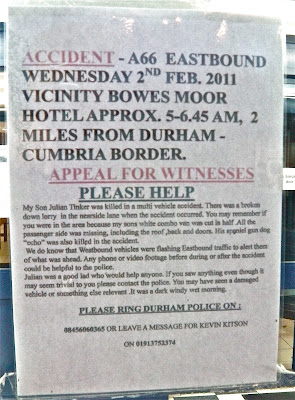 ...keening, crying out in anger and pain, on the edge of cursing God, but by being stalwart.


Let’s say goodbye to her now; and be as brave as her; as brave as you know she'd insist we be. It’s not her death that matters in the end.It’s her life that we’ll take away from here.

On Monday evening I braved the woods above the house; the paths where I try and fail to get lost, even in the gloom of sunset. Sheep were strewn over the frosty fields below the dark edged horizon of the Strath

I walked between close birch and pine along a familiar leafy path as the dogs almost invisible dashed effortlessly back and forth through the winter undergrowth appearing and disappearing in the gloom, never roaming too far, my companions rustling in the woods.

*** *** ***
Tomorrow is Saint Spyridon's day on Corfu; the Bishop always recognisable by his shepherd's hat, who was at the first council of Nicea in the third century of the Christian era, debating the nature of the Son of God' was He as suggested by Bishop Arius - standing opposite Spyridon at the great assembly in Nicea - finite, part mortal or was he, as the majority eventually agreed, consubstantial and eternal, rather than, as Arius in a growing minority argued, a subordinate entity to God the Father.