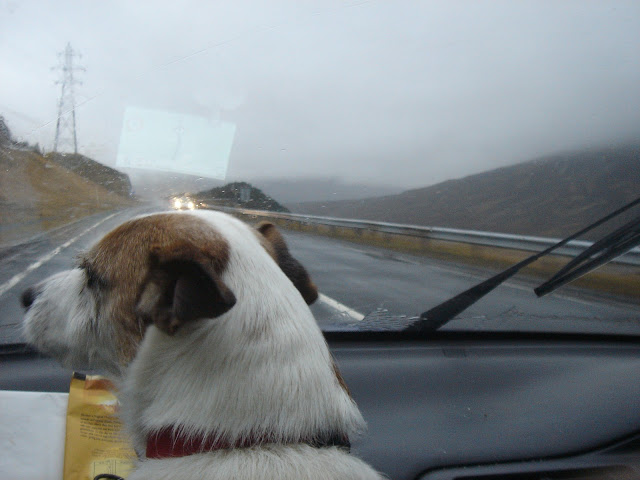 Like a cable that carries many functions road and rail braid with rivers and tracks; a plait running south through the Highlands on the long route to England. At noon we cross the Spey, glimpsed for a second in passing, running high, rippled with white wavelets under grey drizzle. We passed Loch Alvie where Amy and Guy were married in May two years ago.  We chat. As we hurry past Glasgow switching motorways I pass her  items from our picnic bag. She refuels around half-way, north of the border. Surveying the service area - the one where loud muzak plays in the toilets - over a coffee coloured beverage I remind myself to avoid nostalgia but all the same I miss the steam plumed cathedral  of a great Victorian railway station - a sense of occasion attached to departure and arrival as compared to this stop-valve on the flow of the motorway; but remember at Peterborough Station where Charles Dickens in a letter to his confidante Mary Boyle wrote of the service ‘She gave me a cup of tea, as if I were a hyena and she my cruel keeper with a strong dislike to me. I mingled my tears with it, and had a petrified bun of enormous antiquity in miserable meekness' or in a railway story:

He encounters ‘pork and veal pies, with their bumps of delusive promise and their little cubes of gristle and bad fat; the scalding infusion, satirically called tea, the stale bath buns with their veneer of furniture polish; the saw dusty sandwiches'; or Trollope's opinion on 'the real disgrace of England' - 'the railway sandwich – that withered sepulchre, fair enough outside, but so meagre, poor and spiritless within'.
By 1600 we're near Preston, Lin driving as ever, as the sun sets, bright rose on ragged cloud. 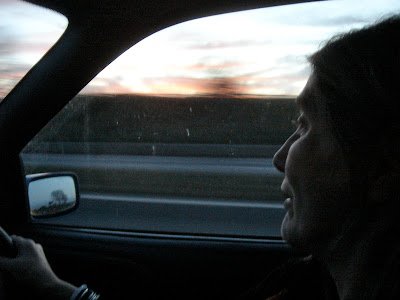 By seven we were on the edge of Birmingham, long streams of headlights and red rear lights curling north and south splayed and smudged across the rainy roadscape.

Before dawn on Wednesday I head for London for work in Hounslow.
*** *** ***
There are morning departures when I’d prefer, for all the evening resolutions, to stay in my warm bunk listening to the sound of rain on the deck; Grimsby Docks before dawn, the sun somewhere far away but for an off-white line over a dark grey horizon between mud spits. The grey brown soup of the flood paused, as I negotiate with myself about the wisdom of catching the ebb, already getting dressed in wet wear, checking things for a crossing to Cuxhaven. Forecasts good, but the present outlook is anything but, amplified by nervousness and morning chill. Time for a mug of tea. Thus I wake in the dark, Lin slumbering, Oscar too, far far inland on a rainy Brummy day and gather my things for a cycle ride into New Street Station. Overnight clothes, toothbrush and razor, notes on scrutiny chairing, a book to read, external hard drive, and wet wear almost as sturdy as for the sea; my oilskin Stetson cap, my yellow Gill top, waterproof gloves and blue waterproof trousers – such a business to get on and off. Put the yellow waterproof cover over my pannier. Pump up to hard the front tyre of the folding bicycle; spray oil on chain, gears, hubs and cranks. Run upstairs. Kiss Lin.
“The alarm’s set for 9.30”
“Mmmm”
Then out into wet street strewn with slippery leaves. Up Wycliffe Road where with flashing lights a leaf sweeping team in yellow tabards is working north beside a big composter truck. One man says “Good morning” to this passing old bloke on his bicycle with fantasies about catching a tide. The ride into town is familiar, amid sleek commuting traffic splashing spray on my impermeables; through the Jewellery Quarter waking up, down the hill past a stream of waiting cars. I’m feeling warm and fit. Taking care. Up and under the library indicating my direction with high raised arm, then through the elaborate cone fields strewn round the work on New Street Station - 'completion 2015' - and into the concourse.
How the cycle comes into its own once close quartered with congested motor traffic. By the ticket machines I remove my wet clothes and stash them neatly round the netting on my pannier and then – alas – the ticket machine fails to disgorge my desired tickets. I’ve allowed plenty of time and the advanced ticket counter has no queue. A young woman conscientiously checks the ticket machine, but can only dispense advice. I buy an another single to London. With concession it’s just £30. Later I’ll have to get onto the system and try for a refund; the first time that’s happened and perhaps it was my fault not scooping up all my tickets from the hopper. With minutes to spare I’m folding my bicycle and climbing into my carriage. My rituals done for a while. 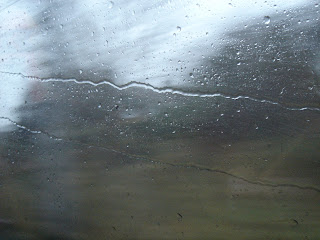 A few minutes later out of the old blue brick railway tunnel, grey Brum is sliding by, grey suburbs, grey countryside, blurred with our increasing speed, the vertical streams of rain outside my big window shift their angle, fragmenting into smaller and smaller horizontally fleeting droplets – for a physicist a measure of our pace, velocity and acceleration. 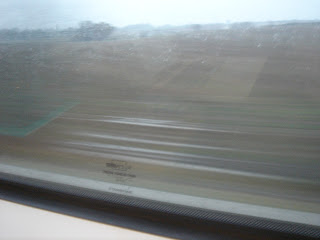 Past Rugby a young woman puts aside her pink smartphone, places her powder compact and eyelash curler – like a metal puzzle...

...on the table and picking up her compact again holds its small mirror close to her face with one hand and works with her other hand and gently pursed lips on her cheeks and eyes and hair, between sips of coffee from a paper mug. As we approach the outskirts of London I glimpse her equal delicacy applying lipstick. By Euston her face and hair are immaculate for the metropolis and her unknown destination.
*** *** ***
On the train I treat myself to the latest TLS with two articles about Leigh Fermor - one by the Classical historian Peter Green, a review of his biography Patrick Leigh Fermor: An adventure by Artemis Cooper


Patrick Michael Leigh Fermor was born on February 11, 1915 in London, one year into the world war that changed the face of Europe for ever. Within four months, the Lusitania had been torpedoed and the first Zeppelin air raids carried out over London. At his birth, the attendant good fairy seems to have been in a generous mood. She lavished on him striking good looks, a strong streak of imaginative creativity, physical vigour, a long and – despite an outsize addiction to both cigarettes and alcohol – largely healthy life (he died last year), linguistic skills well above the average, a phenomenal memory, daring courage, an outgoing and exuberant, almost Herodotean fascination with the oddities of the world (not least its more eccentric and obsolescent aristocracies), and an equally exuberant ability to charm a remarkably wide range of people, most notably (though far from exclusively) women.
The bad fairy, watching all this with a sourly malevolent eye, did what she could, which was quite a lot, to minimize the effects of such prodigal largesse. She began by ensuring that the wunderkind, however percipient about the remote marvels of the world he explored, never, in all his ninety-six years, acquired the taste, much less any real ability, for self-analysis. Unable to diminish his creativity, she saddled him with a perfectionist’s crippling demands, and the infinite time-wasting occupations of the born procrastinator. By rendering him impervious to all formal external discipline – much helped by his being allowed to run wild as a child in Northamptonshire while his parents were in India – she both sidelined him from any professional career in the normally accepted sense, and made it inevitable that his prodigious learning (which she could do nothing to stop) was at least of the autodidactic variety. She saw to it that his undeniable charm was frequently interpreted as an attribute of the freeloading gigolo with a weakness for titled ladies, his infectious high spirits as boring bumptiousness, and his very real courage as egomaniacal self-promotion, often – this a contribution from her irredentist Greek cousins – in the service of imperialist politics.
It follows that any prospective biographer of so remarkable a character (frequently labelled “the last Renaissance man”, and for once the cliché is at least understandable) will have an unusually hard row to hoe, and some very tricky decisions to make. This is no less true of one who, like Artemis Cooper, knew him from childhood: such intimate familiarity may in fact have made her task appreciably more difficult. Paddy (as he was known, in Cooper’s prefatory words, “by all the hundreds of people who knew and loved him” – and, one might add, by many more who didn’t) presents the daunting problem of having become a public legend in his own lifetime.....