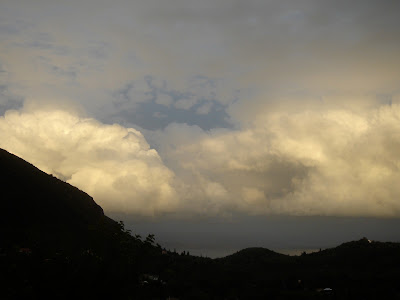 We knew three days ago the weather would change. Mark told us. I trust him, as a friend, and as someone who works for Sailing Holidays, where it's good business to keep an eye on the weather. Even though we’ve seen it for five seasons, the shift as high summer passes is a surprise; an event.
We were strolling below the village on Thursday evening exploring a small church in a clearing at the end of a short track off the road to Kato Korakiana. It was being repaired. Who does this work? Is it done for free? Is it a voluntary tithe based on loyalty to the village? I have so much to learn about this place. In England we would see evidence of collections to maintain churches. Not here.
As Linda and I chatted in the circle of parched land before the church, surrounded by olives, there came the rumble of thunder, easily mistaken at first for a plane taking off from the city. We started home towards the village, its wings spread across the slopes of Trompetta between Mougades to the west and, a kilometre mile to the east, Venetia.
"Have you noticed" said Lin "how Mougades is just as high on one side as Venetia on the other?"
We walked along the straight road north that leads into the centre of the village past small pastures and the now derelict football field. The thunder wandered about, reverberating, not easily placed. Now and then lightning flashed. The evening sky was grey, matte, taupe and the air humid. We felt the first flecks of rain. As we walked the drops stayed as spots on the dry road. I felt them through my shirt.
"It's like an orchestra tuning up!"
"Hurry or we're going to be soaked"
We clambered up the last steep paths to the house.
The symphony started; all timpani and percussion with special effects. Perfectly timed lightning striking across the darkened sky; the thunder deafening, the rain like a breaking of waters cascading down pipes, gullies, over the edges of gutters too small to handle the flow; splashing off window sills and through a couple of windows we'd left open day and night to let breezes cool the house.
All night it rained and thundered following the flicker of lighting through the shutters. Ano Korakiana, being, with Sokraki and Spartillas and Skripero, attached to the island's highest mountains is near the centre of Corfu's storms as the weather of the north meets the weather of the south on the Trompetta Ridge. Peering through our eastern window we can see the warm southern air climbing the cypress ravines forming mist then cloud as its vaporises at the watershed, creating a false impression of weather from the north, when most storms are driven from the south.
I went into town by bus in the morning, taking my folding bicycle. At the bus station, well wrapped in waterproofs, I cycled happily through town to the airport to meet Yianni in the carpark. Here further south the wind was far stronger, streaming water across the runway. A Russian holiday charter heaved into the wind with a customary roar; vanishing in seconds from sight and sound in the thick white mist of the gale.
"It's a dreadful day" said Yianni, wind grabbing at his raincoat, as he handed me the key, holding the back door open for my bicycle. I imagined him meeting new arrivals looking for their late summer holiday on the island and finding this. I suspect he'd been up all night for the late-early inward flights.
I drove slowly into the city with wipers fast, fan full on to clear the window mist, working my way to Garitsa where the waves were battering the esplanade. Beautiful.

It reminds me of the film Zorba. It opens with a gale; a shelter on the quay at Piraeus assailed by wind and rain, doors slamming, water streaming down the windows, people huddled inside awaiting the boat to Crete. That classic was black and white, but there’s hardly a modern Greek director who doesn’t balance blue with heavy doses of grey; grey factories, grimy landscapes with faceless trucks spraying grey water from the gutters of dual carriageways, surging through the exurban strip malls and dislocated condominiums that surround all modern cities. Consciously or not, such scenes give an ageing formula some dilution – compensating for films set in the Republic where the producers locate a globally-branded landscape and pay for Photoshop Ἑλλάς; clearing away tourists, plastic bottles and displays stacked with Chinese souvenirs, to invent a scene of costumed extras, wise old yiayias, wrinkled old men with white-wing moustaches chatting in the shade, swinging kombolói, virgins in comely dresses, kind but relentless fathers, dutifully pinafored wives, passionate young men in white shirts, tactical donkeys on cobbled alleys, decorated by set designers, lighting gaffers and post-production digitisers tippexing out what doesn’t fit the cliché in an acoustic landscape of syrtaki and goat bells dubbed over techno beat, football commentary and engines.
** ** **
The morning after the storm the landscape is changed; a canvas scraped to the gesso, with new colours and shades worked into the imprint of familiar horizons along with new ones which, as the season progresses into the kinder weather of autumn, become more and more a part of the background - the peaks of Epirus in haze through summer...


...show in silhouette, and then by November are enriched by varying shades of snow that will last beyond Easter when the mainland again recedes into haze.
"We nearly lit the stove last night" said Mark, dipping a ladle into a casserole in the middle of his and Sally's table to serve us a steaming gravied stew of duck - mallard and wigeon shot over marshes in Evros by the Turkish border.
*** *** ***
A letter on Flickr from Italy:


Dear Simon, I'm Raffaella De Donato and I work for Lupo Editore, a little and independent publishing house that works in the south of Italy. We would be interested in using one of your pictures for the cover of a book. In particular we are interested for this: Bay on the west coast of Scotland. The book is about a story of two brothers who live near the sea so the picture is perfect. What is the condition for the Rights of Use? Consider that we are a small publishing house and that for every book we stamp only 500 copies. At the same time, we would like that our books became a way to introduce new artists to an audience of readers. This is our website: www.lupoeditore.it Basically, we pay the artists a refund (about €50). We know that is little price, but that's what we can afford also because the copies that we print are few. Please, let me know what do you think about. Thank you! Raffaella De Donato Lupo editore

I said 'credit my mother who took this photo. She'll be delighted and so will my sister Bay...and we'll forget the fee' How I remember that holiday long ago. It was 1950 and we drove over three days from London to the Western Highlands. This was one of the photos my mum took 60 years ago. The book is by Vittoria Coppola and will be out before Christmas...and there's my beloved Bay on the shore in Scotland just a few months ago...