We arrived in Corfu today. Our bodies were here over a week ago. That wasn't the same. There's a moment on a sailing boat. You've motored out of harbour. You switch off the engine. In the sudden quiet, the boat leans and sways as the wind takes over and the tiller tugs with the set of sails. I dropped off the hire car at the airport round noon, unfolded the bicycle I'd put in the back, and headed through the traffic into town, enjoying being outside, threading the narrow streets of the city; not the same as sailing but close.
I left the airport, busy with coaches, and headed east into Garitsa, taking a short cut through back streets until I’m pedaling below the high trees of Alexandras Avenue - a pied bustle of slow moving traffic; and a colloquy of Corfiots along its broad sidewalks, as I weave towards San Rocco Square. At the lights I skip a right into Georgios Theotoki where cafés and shops and parked scooters blend with people riding, walking, driving, up, down and across – an easy unregulated stream - ρεύμα κυκλοφορίας - with tributaries left and right and, everywhere, dappled by midday sun, people sitting at counters and tables speaking to face to face or phone to phone across the world. Where the road ends, at a small roundabout and kiosk, the pall mall – still mainly Greek - splits into Dikasterion, Philharmonikis, Ag Panton,  and slim marble alleyways, too many to recall; its composition, like flood tide in a delta switches form and colour, a brackish mix of locals and foreigners turns into meandering platoons of visitors, spread over the city’s central maze, on excursion from the three cruise liners in the harbour, floating condominiums stopped for a day in Corfu on grand Mediterranean tours – bound perhaps for Venice and Dubrovnik, or west to Messina and Naples or south to Santorini, Crete and Alexandria. Mean time locals have turned into shopkeepers and salesman...
...offering products, inviting custom. Languages become polyglot – snatches of Italian, French, English – US and UK – Russian and tongues from Eastern Europe; people gazing, distracted, shifting focus, momentarily posing for one another’s cameras, stopping starting joining and separating, testing my pilotage, as making no waves, I thread my little bicycle at stroll-pace up Voulgareos towards Pentofanaro and the open space of the Liston and the Esplanade, but taking a swift turn behind its grand Parisian flats to pass down teeming Kapodistriou to meet Linda loitering from the bank. The summer heat's strong but, in shade, a breeze cools. Linda has been reducing our holding of euros, paying Yianni for the car we've given up for three weeks.
"When the day comes they'll be over-printed as drachmas until new currency's ready for distribution. Devaluation will be almost simultaneous" I'd suggested the evening before.
Having divested ourselves of a car we've hours to pass before catching a bus back to Ano Korakiana.
"Let's go to Vido" says Lin.
We buy ice creams on Nicholas Theotoki; stroll to the jetty where the caïque leaves every hour and sit chatting. By 1.30 we're walking on the island, almost alone. Down a track we come to a pebble beach. 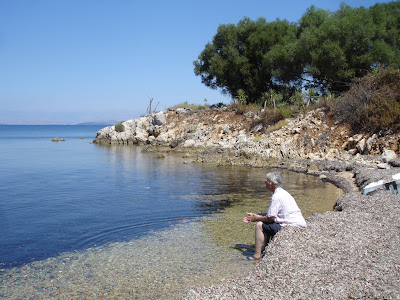 For a few minutes we get the sight of a seal performing for the passengers on Kalypso, a summer boat with a glass bottom that works from the same jetty as our ferry. There was a brochure at the mooring off Xenofontos Stratigou


'Kalypso Star and the Sea Lions, An Underwater Odyssey’…’make contact with another world unique in the world, a window into another universe, a voyage into legend and fantasy’ ‘daily departures’

A friend who lives here said later “that sealion’s enormous”
“Aren’t there two of them?”
“Yes maybe. One of them escaped last year. It got round to Gouvia. They belong to K (an English name). It was so friendly. They were slapping a fish against the hull to get it back”
“In the winter they’re kept in an enclosure by the yacht club at Garitsa”
“I don’t like it” added S “Their cage is far too small”

The wet black tame beast honks and flops effortlessly in and out of the water, on and off a raft inside a marine corral moored a hundred yards offshore.
"Blimey, Lin. That's Victorian seaside entertainment"
The boat leans over as watching passengers clap the show. Then the boat's cast off and the tour departs, disappearing round a point. We have the coast and the clear pebbly sea to ourselves.
I slip off my clothes and slide into the sea. Heaven with the lid off. Dudgeons dissolved. 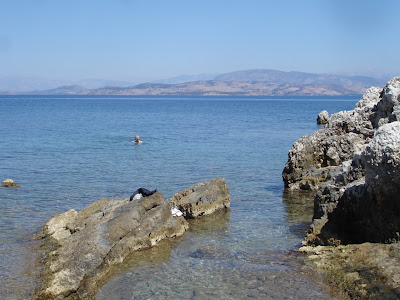 Stroll back to the island taverna, whose owner has minded my bicycle.
"An Alpha, a Diet Pepsi, plate of chips, bread and village sausage"
"No need for a Greek salad, we'll have that tonight"
"I feel good. Let's have a row"
We catch the boat back an hour later and the bus at 4.30, getting into the village forty minutes later, this morning's washing dry as crisp, smelling of sun and breeze. Our driver steered deftly through the dog leg bends of Ag Markos driving on through olive groves, left and right, sloping steeply up on our right, steeply down on our left.
“I like being on the bus” said Lin “You can see into people’s gardens”
I remember when that was a curiosity satisfied from the seat of a pony trap.
“There’s one of the eagles!” Lin glimpsed the bird gliding low over the road passing above us to hunt on lower ground.
Posted by sibadd

Email ThisBlogThis!Share to TwitterShare to FacebookShare to Pinterest
Labels: Vido