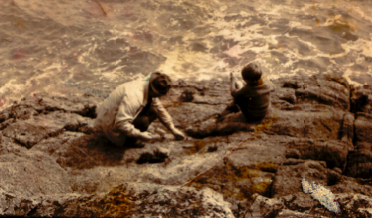 I was with Jack for the day in London. At some large capital hotel off Piccadilly, my stepfather in a tweed suit with waistcoat, checked us in. Our room wasn’t ready so our luggage, which included my folding bicycle was taken by a porter to a smaller single room in another part of the hotel. Jack and I strolled off down a street full of shops until we came to the best pipe shop in the world.
The place was enormous; brightly lit; full of glass counters and brass fitted display stands teeming with a diversity of racked pipes and pipe smoking equipment. Jack was talking to one of the staff, a friendly old man, who seemed to know him when I remembered I’d left something I needed in my luggage. Jack looked a little resigned.
“Do you really need it?”
He handed me the key to the little room where our bags had been taken – a number with an ‘A’ suffix. I walked back to the hotel and found the room. As I was checking through the luggage there to pick up what I wanted someone else arrived to occupy the room – a man carrying fencing gear in two large shoulder bags like those used for a cello. I thought I recognised him as someone successful in the sport. I said I’d move our luggage into the corridor with a mind to take it to our booked room, but having done this with half the luggage I realised I hadn’t got the key.
I worked my way down a series of passages and broad stairways to the reception where, in a hurry now, I asked for our key over the shoulder of someone checking in, apologising for butting in. It was swiftly handed to me. Our room was now ready.
Returning to the other room I got lost.
I might have gone to the wrong floor, or else I'd come into the wrong part of the same floor which had passages that seemed to run parallel with other passages. At last, through a small connecting door beneath a tall sunlit classical atrium, I got onto the right corridor, narrower and dimmer, and found the room. The luggage I’d left outside had been moved.
The guest in there said a staff member had taken it to a holding place in the grounds of the hotel. I moved the rest of our luggage including my folded bicycle – we seemed to have so much stuff – into the corridor and started carrying part of it down to where I thought the other luggage had been temporarily stored outside. I thought it best to have it in one place - together.
I spied a pile of baggage lined up on an area of uncut grass amid the wide lawns at the back of the hotel, down a grassy tufted slope. When I got there I couldn’t see our bags anywhere. I guessed they must already have been taken to our room and started back into the hotel intending to collect the remaining luggage from the small room but found myself in friendly conversation with a woman who worked in the hotel and seemed to know me and Jack. I was more and more anxious about the time but still chatted out of politeness. then dragging myself apologetically away, I wandered over the rough lawn back into a labyrinth of passages unable to find my way, eventually realising I was in the wrong building of this towering hotel - a part matching the exterior and interior of the other building but with all room numbers having the suffix ‘B’. I was getting more and more disoriented and disconsolate; our luggage more and more dispersed, even lost. I was imagining Jack waiting and waiting at the pipe shop, but I was determined to recover the situation and so carried on the fruitless search even as I guessed it was almost certainly futile, hauling one hefty case along brightly lit deep carpeted corridors lined with mirrors up and down broad stairways, taking lifts in soundless elevators, retracing my steps in search of the rest of the baggage and one or another of the rooms where it might have been left or was supposed to have been taken, when distraught and frustrated, I woke up.
*** *** ***
There are things on my mind -  my mother in Scotland; phone conversations with UK and my sister in NY; excitements arising from the progress of this three year project to re-introduce my stepfather’s films made in the 60s, 70s and 80s about countrylife; the maze surrounding rights and royalties; the continuing news of the long torment of the crisis in Greece as it effects not only the dream of European Union, the wider population of this beloved country but friends and neighbours; with further news of local burglaries in a haven where keys could be left in doors and ‘wallets left on walls’. Such large matters make the contingency of detail occasion for unnecessary rebukes, sharp retorts and disproportionate gloom at a tap that drips.