It's wine making time in the village. The heat of summer caused many to lose most if not all their grapes. For at least the last two years this has not happened to Katerina Fakiola and her family. The  other evening, on our way to a delectable chicken curry on Mark and Sally's balcony, we passed by her house. Wine making was in full swing; pomace piling up and grape skins and water swirling down the steps, the unmistakable scent of fermentation wafting down Democracy Street. Katerina told me last year that her family grow a white grape better adapted to very hot summers. Others have to buy their grapes from the Zakinthos trucks parked at intervals along the main roads, bringing home what they need to press for wine in plastic crates. Meanwhile the cooler evenings has brought the regulars indoors from the terrace of the kafeneon, continuing their debates about what's happening in the world.
*** *** ***
I was in town on Wednesday getting insurance for Summer Song from a new company via an agent recommended by Paul. I'd walked away from the previous provider after one of their employees started giving me the run around, angling I suspected for something extra in my annual payment. The new supplier knows his job, understands boats and gave me confidence. On the way to his office I stood to support a long march of public sector staff marching with banners up Theotoki towards San Rocco Square - all ages, occasional babies and toddlers and one or two dogs.

In Athens and Madrid there were thousands on the streets, mostly peaceful but by the end of the day, smoke, flames and violence. The news is always dire. There is no light at the end of this tunnel without imagining a different way of living. 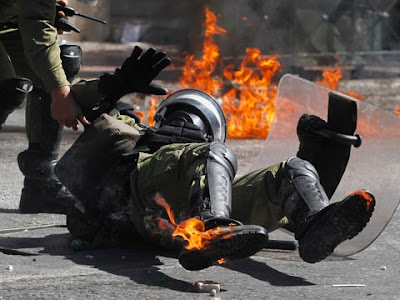 Degrowth is becoming better understood - by a few - tho' across the world the numbers look significant. It's not a word that sounds good in English. I prefer décroissance, decrecimiento, decrescita. But even in English it's an improvement on the compromise phrase sustainable development.


Def: Degrowth is a downscaling of production and consumption that increases human well-being and enhances the planet's ecology and equity in its population; where societies live within their ecological means, with open, localised economies and resources more equally distributed through new forms of democratic institutions. Such societies will no longer have to 'grow or die.' Material accumulation will no longer hold a prime position in the population’s cultural imagination. The primacy of efficiency will be substituted by a focus on sufficiency, and innovation will concentrate on new social and technical arrangements that enable us to live convivially and frugally. Degrowth does not only challenge the centrality of GDP as the dominant policy objective but proposes a framework for transformation to a lower and sustainable level of production and consumption, a shrinking of the economic system to leave more space for human cooperation.

*** *** ***
I measured and drew diagrams and ordered the wood frame pieces back in April, having rescued a set of wooden shutters from the back of our apothiki and checked they'd suit the upstairs window of the sitting room - the one with the view towards Epirus and the sea. I dug out four hinges, collected the frames - cut and planed - from a timber yard in town, and treated them with sealant. Then we had to scrape down the old shutters, cleaning off flaking paint.
This September Lin applied the first coat of new green paint on frame and shutters; work made tedious by the detail of the louvres. Then came the delicate business we've never mastered of fixing a pair of male hinges on each upright of the frame. How do carpenters ensure they get this right? There are wrinkles we've not grasped. We laid glue in the chiseled-out insets for each hinge; then closed each shutter on them, having fixed the cross-bar of the frame to the top of the uprights - the whole assembly laid as flat as possible on a table under the veranda. When the glue was dry, with the shutter as tight as we could get it up against its upright, we opened it, and drilled - where necessary countersinking the hinge screw hole up into which glue had risen - into the wood to screw each hinge firmly into its upright.
The whole assembly was now ready for inserting inside the window just outside the mosquito net. We removed the shutters from the hinges; offered up the frame, held open at the correct width with a temporary strut screwed firmly across the two uprights.
To our delight it fitted.
"With all that measuring it bloody well should!"
"But for Sod's Law"
Now I drill through the frame, through countersunk holes already made, into the plaster and brick side and top walls of the window. The 9 holes are now marked with a small drill. I remove the frame again, and with a larger masonry drill make 9 holes into which I can fit rawlplugs. Amazingly the drill makes the holes where I want them rather than slipping off on a stone or entering a soft spot and making a far larger hole. We put back the frame and insert the nine holding screws.
"My god. They all match"
I screw them well in, the screw heads sinking into the countersinks, and the frame is firmly in place.
"Cup of tea!"
"Don't count your chickens" 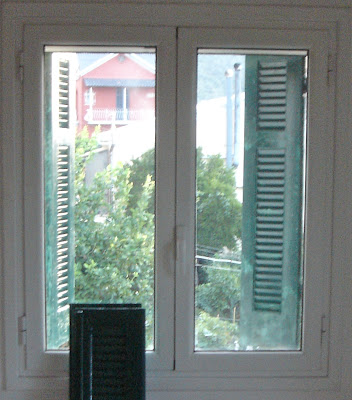 We fix the shutters to the hinges. They nearly close. I sand some wood off the the places where the shutters are bumping into the top of the frame and try again until they fit near perfectly.
"Cup of tea!"
I fix a short rod in a hole carefully drilled through the marble windowsill, and another on a block attached to the top of the frame, against which to close and secure the shutters with the metal hooks originally attached.
All that's now needed is a second coat of paint and filling round the frame where it meets or doesn't meet the wall...oh, and some turnbuckles on bolts in the exterior wall to hold the shutters open in a wind. 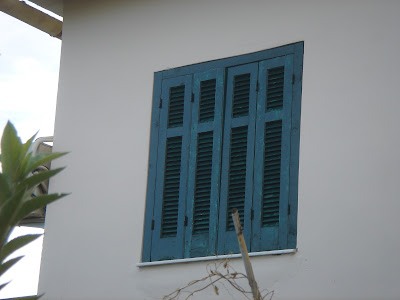