I've known slugs forever. They are interesting, sometimes exquisite, creatures - tweed patterned, perfect-pitch black; outsiders that now and then come indoors; disturbing to tread on one with a bare foot. Οnly since I've had an allotment has my relationship with them become personal - especially in a year notorious for their depredations on kitchen gardens - in this case on my cabbages. Their job in the order of things is to be 'decomposers', but too many of them are decomposing things we humans want to eat first. 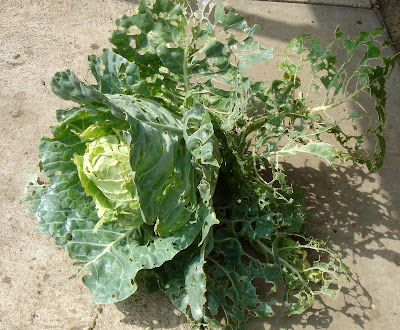 An otherwise successful sequence of crops has been riddled. I'm privileged to be able in my old age to be working a plot on the Victoria Jubilee Allotments next to Handsworth Park in Birmingham.
This is my second year since the site opened in June 2010. The grubbing up of deep weeds, breaking up and turning the soil, laying of paths, arrival of a shed, sowing and harvesting a soil improving crop of potatoes and occasional scything of verges has happened. The hard work was what I expected. There's no question that I'm making progress - in part self-taught, in part tutored by more knowledgeable neighbours on the site. My back aches less after digging and weeding because the soil works easier and because I've become better at working with fork and spade and hoe.
In recent months, as well cropping as potatoes, I've been bringing home runner beans, broad beans, spring onions, brussel sprouts, onions, spinach, and - I'd like to claim - cabbages but for the slugs getting to them first. We're forbidden insecticide and non-organic slug pellets on the allotments - a policy I support - but so wet has been the weather that the organic slug pellets I put down were ineffectual. I couldn't even see the slugs that were causing the problem. Other gardeners complained of them too. This afternoon I picked two cabbages that looked as if they might be complete enough to be cookable. I removed their outer leaves finding slug after slug - often larger ones lodged in the damp spot where the leaves joined the stalk. At last I was seeing the cause of the problem.

I found at least six slugs before I arrived at a centre that was unnibbled. I then selected a third smaller but well bunched cabbage perforated to the core; took it apart leaf by leaf removing ten slugs.
Andrew Simon, a friend, strolled round. I explained what I was doing with the plot; how it was 'coming along'. We spoke of the dearth of butterflies and watched bees - one solitary crawling drunk in the purple flowerhead of a thistle. I mentioned slugs.
"I put saucers of beer out. The slugs go in. You take them out a drop them into a moderate saline solution. It kills them almost at once."
Earlier Vanley had suggested I put a plastic bag on the soil beside the cabbages
"They crawl under it in the night and you can pick them off the next morning".
Later our friend Denise came round with her great-nephew, Dennis.
"Put out saucers of tinned cat-food. The slugs love it. That'll keep them off your cabbages and you can collect them up when you collect the saucers."
I made a deal with half a dozen slugs that I'd spare them if they spared my vegetables, wrapped them in a leaf and hurled them into the park. A friend in Essex emailed:


But the slugs will find their way back, Simon! and they will lay hundreds of eggs everywhere and they shall hatch into hundreds more for next year. They are hermaphrodite, did you know that? both male and female produce eggs I think. A slug can live three years - and a snail can live 10 years as they have their own houses! Sorry, no room whatever for clemency to slugs, the best I can do is not to kill them with salt which is a revolting death but to squash or spike them instantly. Has to be done!

I made a plea; the place of slugs in the great cycle...thinking of Amos Oz's character Fima conducting interior monologues which, I recall, included reluctance about using the heel of his shoe to bash cockroaches in his messy flat. The action brought to Fima's mind the image of a kneeling man being shot in the head:


...Yes indeed, if they did the job they were created for, we would value them like worms but alas they have fallen into sinful ways and prefer nice new seedlings etc to old stuff.

I've been so pleased to be getting greater control over my plot but I've overlooked the control of pests - especially slugs, so abundant this year. The next harvest, especially root vegetables and brassicas, will be getting far more attention. I will experiment; study the defence of my crops - now that I'm beginning to succeed in growing them.


This Sunday evening members of our choir came together in the courtyard at Ag. Siderou above Venetia (the eastern end of the village) for the 'final' concert of the year to enjoy mezes and village wine accompanied until late by three troubadours; everyone singing. The 'tutors' Georgios Anthis, Eftekhia Vogiatzoglou and Pely Kontogouris were there.