We left Birmingham amid rain, flying through the night. A mix of reading, dozing, with now and then a touch of turbulence to mark our steady passage through the darkness. Lin’s picnic of bread rolls and ham with mustard, a cup of coffee from the trolley to sip, an exchange about the time. I turned my watch forward two hours; read some more – Henning Mankell’s Italian Shoes – enjoying its icy Baltic landscape. Catnapped. Our almost unnoticeable journey - made easier by staff kind enough, without charge, to place us in a front row with leg-stretch space - comes to an end with a familiar descent, a tiny bump, a reaching up into lockers for hand baggage, a ludicrous bus ride under 50 metres to the ramp into the terminal at Kapodistria, a few seconds examination by a young woman immigration officer, a few minutes as luggage bumps onto the carousel and we’re on our way in a car left for us at the airport; the quiet pleasure of arrival laced, not with the strangeness of a new place, but with the delight of weaving a familiar route through the sleeping city, along the esplanade, onto the dual carriage way to the T-junction at Tzavros where the Paleo road turns away from the sea and we draw closer to invisible mountains, taking the turning at Doctor’s Bridge on the road to Sidari; after two kilometres the sharp turn right for Ano Korakiana, whose street lights start to show through the trees
“There’s a nasty pothole just here” I mutter
“I know I know”
But it had been filled in since we left in May. Then we’re stopped on the road above our steps with street light to see the way down. I cart our cases to the door; fumble with keys – one carrying an LED to show the keyhole; let myself into our house’s hot interior, turn on water and electricity, plug in the fridge; get the kettle going for a cup of tea and coffee. Lin joins me, unpacking food from England to go in the fridge. I turn on the air-conditioning for 30 minutes while we get used to expected but unaccustomed heat, halve our last picnic roll and sit with our hot drinks, before turning in to sleep as the light grows outside.
We sleep until midday – 10am UK time – then rise, creakily, still stunned by heat.
“Shall I turn on the air-conditioning again?”
“No you will not” says Lin “Have you any idea how much electricity those units use? Open more windows”
Outside is as hot as inside. Heat is in the stone of our deep thick walls, the concrete steps and path, stored in the village. Blood heat weather makes me dozy until I get used to it, slowing myself. We’d come in August to attend Paul McGovern’s Agiotfest event in a small dry sloping field behind the houses in Ag.Ioannis, a mini-concert supported by local businesses. Sally who runs a bar in Ipsos sold hot dogs and beefburgers. Another stand sold light and heavy Corfu beer and village white wine - all chilled. 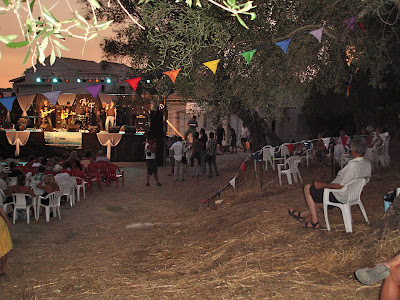 Lin and I pulled up chairs at a vantage point below a venerable olive tree, and enjoyed the music. Friends appeared, as you’d expect on an island. Mark came up and  and tapped our shoulders. So good to see him.
“Hi you two” He’d just left work “I’ve driven across Greece today, from Evvoia”
“How’s everything?”
“Fine. Busy”
We saw Lionel, Paul M and Lula, Hilary P, Sally from Ipsos, Colin, Sue, Kostas and Georgia  – sometimes sitting with them and they with us. Later I stood beside the towering speakers beside the stage to watch the acts more closely and when Steve Gibbons arrived, round midnight, Lin joined me and we danced.
*** *** *** 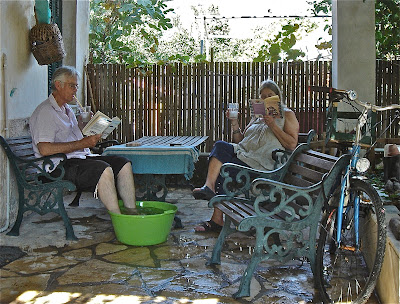 Lefteris lost the greater part of his vegetables in the heat as July shifted to August. We'd seen his garden bare below the washing line.
"In one day and night, everything was gone. Vasiliki watered but it was too hot."
"The grapes too?"
"Everything"
His surviving crops are on a small estancia above the village and he's still managed to grow some kolokithakia in the garden here. Ours planted before we left have not survived. The mainland and the island's further heights are lost in heat haze. The sea's like steel. Mosquitoes are rare. Swallows have gone. Ants and wasps abound. Work is best done in the early morning when there's dew; even a small breeze. Then things go quiet until the evening. High summer is no time to be in the Mediterranean. We look to the cooler weather of September. I've used the rare ripe lemons left in the garden to make citron pressé adding ice and bowl of water to cool my feet and keep ants at bay. Winter's the risky season in the north; here it's the summer that's risky. Northerners share imagery that collates winter with shivering and the seasonal distemper of long nights, assuaged by Christmas. In the modern world it’s seldom so - with shops and cars, salted roads and central heating. When for 24 hours a rare snow storm evades the mighty Gulf Stream and closes our modern spaces, the weather personalities don thick clothes and gravitas to pass on official warnings to an insufficiently tremulous population to take only journeys that are "absolutely necessary"
In Britain winter’s danger’s kept at bay, so muted in the cities where most of us live, we rejoice in the exceptions, turning out in city parks to throw snowballs, slide down slopes on plastic sledges (so seldom used they have to be bought anew); imitating figures in a landscape by Bruegel.
Here, even in evergreen Corfu, it's summer’s bone. Hay, no longer grazed by sheep and goat, tempts madmen hungry for the hullabaloo of a bush fire, ally of land robbers greedy to lay concrete over burned woods. Stoves in winter disperse the cold; in modern homes here, air-conditioners reverse the process fanning heat into the street.
Perhaps this is why Christmas hasn’t been nearly as important in the Greek religious calendar as Easter. Mediterranean winters haven’t warranted the hieratic borrowing of our ancient mid-winter cattle slaughter and meat salting combined with pagan ceremonies to recover a sun, that doesn’t come near so close to disappearing down here. Of course in Greece, no more than Britain, it’s hardly fatal weather; not like the furnaces of Arabia or India or the red spinifex wastes of central Australia, but all the same, when the sun rises over the edge of the mountains, it flares through the house as though studio lights have been turned on, projecting patterns of light and shadow, dazzling me through even the small kitchen window. Turning away I’ll feel its heat on my neck and shoulders.
The effect’s stronger when there’s no wind; when that furnace door opens over an oily mirror at sea, for a few seconds made discernible on the horizon as an orange coin, before a soundless detonation of light.  The summer’s no friend in Greece, provides no cricket-green days between showers. And yet in the village - in villages across the olive belt - the torridness of the day enlivens evenings. Its relief from the heat of the day brings out families for meals at tables laid by the street amid geranium and bougainvillea, roses, jasmine and vine, and children playing late.
Our close knit houses are - like an ingenious theatrical set - turned inside out. As the evening progresses characters enter and exit. The occasional car passes left-right and right-left on Democracy Street, shining a spot on a neighbour, a grey haired lady in a print dress. She leans, a practised actor, on the green iron railing above the thirteen whitewashed steps that zig-zag twice to the street. She chats to someone below - one of the main characters sat in front of his house, Lefteris, who’s already been talking cross-stage to the family in the garden opposite hidden by a fig tree,  sat round a table under a vine canopy. At a window in the high building across the narrow street there’s a fleeting silhouette, then Lin’s on stage chatting from the alley to Lefteris family who’ve joined him. Now there are two leaning at the railings. I’m in the picture, entered centre from the steps of our balcony. Natasha gets up so we, who’ve not seen her since we arrived, can kiss and embrace. 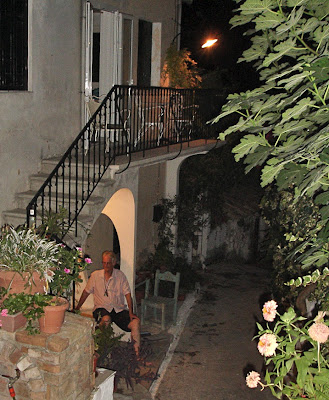 She asks how we are; speaks of the fires on the island, some near here, some below the city. The sound of children runs in the wings. All of a sudden there’s a frieze of them strewn across the steps, cycling to and fro on the street, calling to one another, acknowledging grown-ups, even us
“Hullo Simon”
“Hullo Linda”
Extras stroll up and down, discrete in the shaded background – ready to join in an opening song and dance routine. 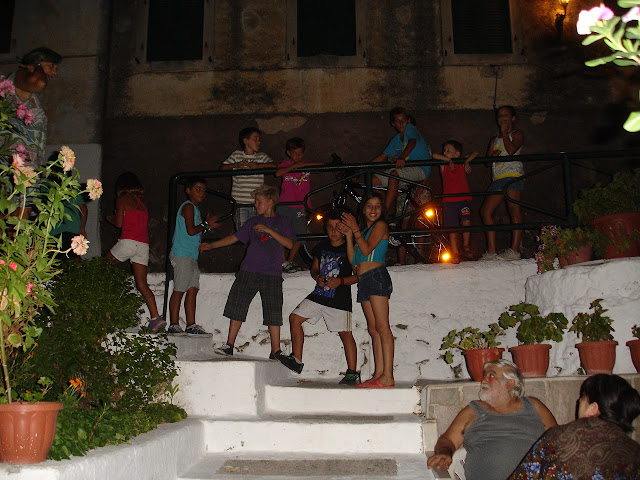 *** ***
This adventure of recovering my stepfather's films - the first made in 1959, the last in 1986 - continues. Lucy Danson at Delta has sent me copies of her artwork and a draft of my essay on Jack that will go as part of a leaflet with the boxed set of original Out of Town Programmes that Charles Webster plans to put on sale on October. We await Endemol's approval.


...but it looks as if these 34 episodes of Out Of Town are the only ones left. All the rest, like potsherds from an old dig, are cracked, or incomplete. These are the last and only real original broadcasts that Jack made of his twenty one year series – Out Of Town – made available by my friend Charles Webster and his colleagues. 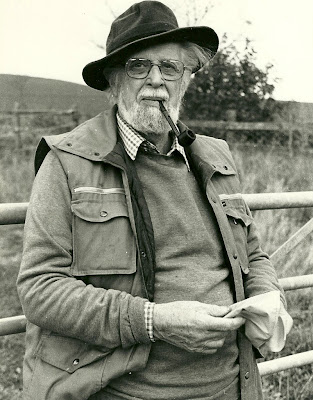 *** ***
Cllr Waseem Zaffar, one of our ward councillors, is chairing the city's Social Cohesion and Community Safety Scrutiny Committee, inviting representatives from voluntary and community organisations in four areas of the city - Brandwood, Bordersley Green, Kingstanding and Lozells and East Handsworth - as well as some city wide organisations, to take part in a small workshop session to discuss some of the questions raised by the Enquiry, speak to them about their experiences and hear what more the Council could do to enhance relationships between communities...on the 18th September from 4pm - 6pm in the Council House, Victoria Square. When I told Waseem I was really sorry I couldn't make it he asked me to send a letter with my thoughts on:


• Whether residents of Birmingham consider themselves Brummie
• What gives people a shared sense of belonging and identity – is it their street, neighbourhood, city or other factor?
• How much pride there is in Birmingham as a place to live and work
• What positive stories are there around people with shared values coming together to make a difference?
• How do we engage with new communities and how do we support their integration into the city?
• What more could we do to make people proud of living in our city?

I shall have a go at these interesting questions. I'm not sure if they are answerable.
Posted by sibadd