Fetched mum's paper from the shop at Inverarnie and a litre of semi-skimmed; bought a John Grisham paperback - perhaps to read on the way home; put rubbish in the bins; recycled cans and bottles. I'm leaving Scotland soon; taking the train back to Birmingham. We'll be in Ano Korakiana in under a fortnight, with lots to do in the days between.
Aftab Rahman, who takes the social web for granted, circulates a short slideshow on Facebook, recording our Cultivation to Consumption event - two happy rainy hours on the Victoria Jubilee Allotments in mid-July and the next one to be planned. He adds images from our reckie, the other day, for a Lozells and East Handsworth Heritage trail that includes Soho House, St Mary's Church, The Victoria Jubilee Allotments, St Mary's Convent, the nine restored Georgian terraces in Hamstead Road, the gatehouse of the Watt Estate, The Old Toll House at the junction of Hamstead and Villa Road and Handsworth Park. We repeat the walk for further planning on Thursday afternoon, fine-tuning the route:

Hello Simon Thank you for responding.  I forgot to attach the timetable for next week 15th Wed.  See below and thank you for bringing this to my attention.
3:15 Soho House
4:00 Asian Resource Centre - The Old Toll House
4:30 St Mary's Convent - Hunters Road
5:00 Hamstead Road - row of 9 houses built 1836;  9 interlocking amazing gardens
5:30 James Watt Gate House - West Drive
5:40 Victoria Jubilee Allotments off Hamstead Road
6:00 St Marys Church - to be confirmed6:30 Handsworth Park and bandstand
7:00 Thornhill Police Station
7:10 Rhodes Alms House - Soho Road
7:20 Handsworth College - Soho Road - to be confirmed.
The above is approximate timings and may run over.  Johur has agreed to come and join me at 315pm and Jesse will come and join us at 4:30 pm at St Marys Convent.  My mobile number is 07861 310802, please call if you need to find out where we are. Kind regards. Aftab

**** ****
After circulating sketches based on photos plus two sittings Jan Bowman has completed a portrait of Richard which we all like. She's mailing the final portrait to Mum in a few days.
"He's been difficult to draw. He's quite handsome. I've been looking for flaws to get the likeness."
It was my idea to commission Jan after she sketched me as a quid pro quo for finding her a replacement bicycle after hers was stolen in London.

Miriam Chapman, who's Dad has a plot on our site, has emailed the Victoria Allotments Association about the bees Gill Rose has placed on my plot:


Dear Lorraine Luie (Hon Sec VJA Association) I am writing on behalf of Friends of the Earth Birmingham. Friends of the Earth have recently launched The Bee Cause campaign to help halt the decline of British bees. One of the ways we are doing this is encouraging people in local communities to grow bee friendly plants. I would love to explore the possibility of organising a 'Bee Breakfast' on the Victoria Jubilee Allotments. It would hopefully be a Saturday morning in September/October (possibly Saturday 29th September?). The event would be for all allotment holders and other keen nature conservationist in the area. We would also hope to invite our local MP Khalid Mahmood. For more information on The Bee Cause. I look forward to hearing from you, Miriam Chapman. FoE Volunteer chapman.miriam@gmail.com

Dear Miriam. Brilliant! Let’s make it happen. Can I check with Gill the owner of the bees looking after them on our plot that she is happy with this? She (and we) had quite a bureaucratic gauntlet to run to get her bees accepted after a rejection a year earlier on the basis of one complaint by a plotholder’s wife about the risk of Anaphylactic shock to her husband. The allotment officer for the VJA ruled against the beehive, and for their security our friend Gill removed them to a city apiary in Handsworth Wood.
Since then we’ve been working hard to have another colony on the VJA. A new hive was finally approved only a fortnight ago. Wonderful.  I understand only too well how ignorance among the general public - even some plot holders - has made the council risk-averse re bees despite the enthusiasm for their wider introduction in the allotments section of the Council.
We have won the support of the site association, the approval of all adjacent plot holders, and have, as advised by a city recommended expert, erected an 8’ high screening around the hive. This has been officially inspected and the presence of the bees - European Honey Apis mellifera - will be reviewed this Sept/Oct to ensure there have been no ‘incidents’ or complaints - all of which are to be recorded by the site association.  It’s a delicate matter and we are all (including the council officers) cautious about the terms on which we give our wonderful cherished bees more publicity. I applaud the idea of a Bee Breakfast to learn more about growing bee-friendly plants. I’m subject to Anaphylaxis myself but regard that as my problem not the bees', and always carry remedial kit with me (not just on the allotments).
We should be pushing the Bee Cause Campaign and supporting events. It encourages others to get training as apiarists, and helps reduce prevalent eco-illiteracy in a city that is not especially bold on green issues (I speak as an urban cyclist and campaigner for urban green space). Birmingham despite bursts of rhetorical greenwash is far too timid on the environmental crisis. It could take such a lead but there are still echoes of Brum as the motor city of the UK. Nostalgia for our mighty smokestack industrial heritage runs through the city’s popular culture (:)). We so need to see the new wealth that be created by smart growth - which includes bees bees bees and more bees.
By the way I’m out of the UK in October. Of course I don’t have to be involved but I’d like to be, as I was in the recent Cultivation to Consumption event run by Aftab Rahman on the VJA in July. He hopes to run another of these in September on the VJA. Aftab knows about the bees return to the VJA and suggested that if possible we might add honey to the allotment fruits prepared for consumption at a future event. Great idea. (I’ve copied this reply to him)
I’m all for inviting our local MP but don’t miss out on an invite to Cllr Waseem Zaffar who attended the Cultivation to Consumption event and is lobbying for delivery of the playing fields next to the allotments that were part of the S106A that saved so many of the plots on the site. Waseem has just been awarded a well deserved MBE for services to the voluntary sector in the city. He’s even been known to hug trees! Best wishes, Simon

I can't always work out, in the heat of these unlikely days of sun when clambering a slope, what are insects rising from the warm grass and what are floaters inside the liquid of my eyes. I saw at last a tortoise shell butterfly basking on the dried mud of a path as I walked with the dogs and Amy's best friend, Liz, whose come to stay at Brin Croft for a while. She and I strolled along the Farnack yesterday. The terriers romped, swimming, sniffing, tasting the Highland air...
..."There are two rivers that would run through my paradise. This and the Itchen" - a river far away in Hampshire...where, as a four year old, I looked over a low bridge at the brown trout inches from my nose. The Itchen rises from a chalk spring like most southern rivers, remaining more or less level through the year, unlike its burn-fed counterpart that rises and falls with the rain. 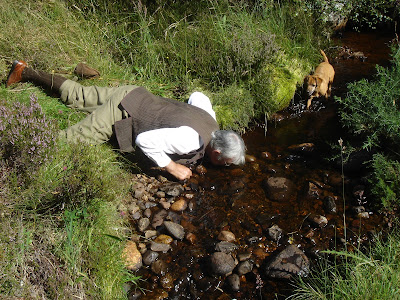 The dark grip of winter is unimaginable in the present landscape. Liz snapped me sipping the cool peaty water of the burn. She mentioned Gideon's way of choosing his three hundred to fight the Midianites, as she remembered it from school.


Judges 7:5-7 So he brought down the people unto the water: and the Lord said unto Gideon, Every one that lappeth of the water with his tongue, as a dog lappeth, him shalt thou set by himself; likewise every one that boweth down upon his knees to drink. And the number of them that lapped, putting their hand to their mouth, were three hundred men: but all the rest of the people bowed down upon their knees to drink water. And the Lord said unto Gideon, By the three hundred men that lapped will I save you, and deliver the Midianites into thine hand: and let all the other people go every man unto his place.

I don't believe the imposed interpretations of some scripturalists that one category of drinker made a better warrior. Gideon simply needed 300 short straws.
*** *** 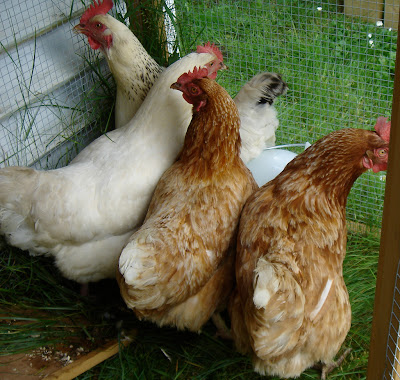 The chickens have started laying in their new home. I found the first lay in one of the egg boxes yesterday morning and brought the warm egg to my mother who wrote the date on it. I haven't done that for so long.
She also extracted a Tick - Ixodes ricinus - from dog Oscar, who'd picked it up among long grass and bracken. They're not easy to remove. This little mini-beast digs head and thorax deep into the flesh of its host usually around leg pits or muzzles and must be teased out wriggling like billy-o by holding tight to the little bag of blood that's all you can see attached to the dog, taking care not to break the insect in half leaving one half to die still embedded with a risk its corpse will cause its point of entry to go septic. 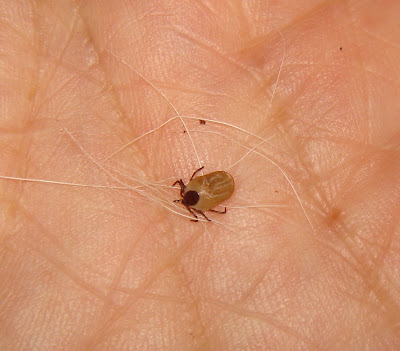 *** *** ***
In Ano Korakiana, at the weekend, the Philharmonia played at the top of the village before a packed audience - braving a high wind... 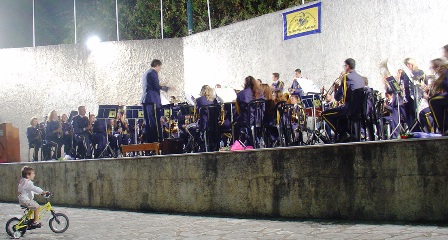 The concert was led by conductor Kosta Zervopoulos, who devoted his first official performance in the village to the memory of his father. It was a joyful challenging event rewarding the crowd who came to watch as toward the finale the entire band rose - literally - to the rhythms of the samba. The breeze blowing throughout the event, sometimes gusting, created several small problems for the musicians, with printed musical parts thrown from their stands*. Guests of honour included a new member of Corfu's SYRIZA Sameelis Stephen, former Mayor of Corfu, John Kourkoulos, director of music education and one of the founders of the Association, Mr. Papadopoulos, the curator of Byzantine Antiquities, Ms. Rigaki, the sociologist, Nikos Fakiolas etc. At the end, the President of the Association Spyros Savvani, reminded everyone of the next event - the public appearance of the Association's Dance Division next Wednesday. 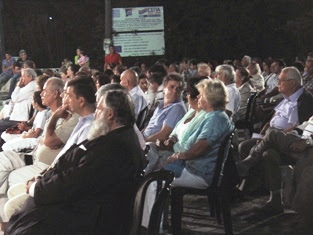 ...and people from Korakiana and neighbouring villages have been over to Skripero on Monday evening to enjoy the annual frog feast - Καρλακοπόδαρα - enjoying the songs of George Mavromatis while queueing for the deep fried delicacies.