'We have been on some rough roads, hit some pretty big holes etc but both bikes are standing up to the rigours really well and are comfortable to ride. I am riding a Vivente World Randonneur and John has a Kona Sutra'...my friend John Martin, justly proud of hitting the 7000 kilometre mark on his and his friend Alistair Walker's cycle ride across great Canada in search of what makes rural communities work - or not (scroll down for a map of their route on this page of Democracy Street)


About the study: This summer I will be travelling across Canada, west to east, visiting small rural communities in ten provinces to learn about the ways in which people in these places have adopted sustainable living practices. Like small rural communities across Australia Canadian communities are also dealing with significant change relating to economic, demographic and environmental factors. People in these rural communities typically work together in creative and innovative ways to secure their viability and liveability. I am interested in how they organise themselves to do this, how they relate to other communities in their province and with the Federal Government to ensure a sustainable future. Prof John Martin, University of LaTrobe, Bendigo 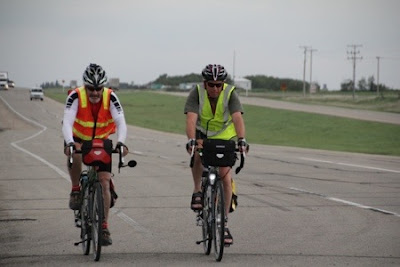 Meantime my fellow Corfu blogger hums in print the praises of Ken Block - a celebrated petrol head for whom some benighted agency of government was prepared to give the freedom of the city to make skiddy noises:


Have I shoved this latest Ken Block wheelie freak-out in here, or just in my Facebook which has overtaken my blog for the true test of temperatures and times. The man has crazy skills, and clearly crazy contacts because for whom else would they close the place down. One snotty-nosed kid to sneak out the backyard to see what's going on ... round comes Ken sideways in a cloud of dust ... all they'd find would be a splodge of snot on a pot plant.


Why should anyone steal a watch when he could steal a bicycle? ~ Flann O’Brien

The bicycle is the most civilised conveyance known to man. Other forms of transport grow daily more nightmarish. Only the bicycle remains pure in heart. ~ Iris Murdoch 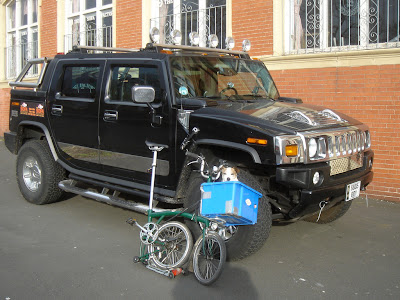 When man invented the bicycle he reached the peak of his attainments. Here was a machine of precision and balance for the convenience of man. And (unlike subsequent inventions for man’s convenience) the more he used it, the fitter his body became. Here, for once, was a product of man’s brain that was entirely beneficial to those who used it, and of no harm or irritation to others. Progress should have stopped when man invented the bicycle. ~ Elizabeth West

When I see an adult on a bicycle, I do not despair for the future of the human race. ~ H.G. Wells

The bicycle is a vehicle for revolution. It can destroy the tyranny of the automobile as effectively as the printing press brought down despots of flesh and blood. ~ Daniel Behrman

When I go biking, I repeat a mantra of the day’s sensations: bright sun, blue sky, warm breeze, blue jay’s call, ice melting and so on. This helps me transcend the traffic, ignore the clamourings of work, leave all the mind theatres behind and focus on nature instead. I still must abide by the rules of the road, of biking, of gravity. But I am mentally far away from civilisation. The world is breaking someone else’s heart. ~ Diane Ackerman 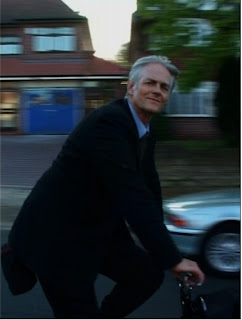 … the bicycle is the most efficient machine ever created: Converting calories into gas, a bicycle gets the equivalent of three thousand miles per gallon ~ Bill Strickland, The Quotable Cyclist

*** *** ***
On Thursday the Cultivation to Consumption event under pouring rain on the Victoria Jubilee Allotments was lovely.
It began with Aftab wandering around the site collecting vegetables from our sodden plots. I gave cabbage, broad bean, spring onions and potatoes. Nothing to the contributions from the more experienced gardeners like Wesley, Danni, Micheal and Vanley. The cooks were Aftab but also Chani who'd only been recruited at the 'rehearsal' on Wednesday when he'd turned up looking for a plot. As it was he bought an extra cooker, more food, an extra table and his skills.
I'd brought a gazebo from home - a welcome shelter for cooking and eating. Others, turning up in dribs and drabs in the grisly weather, sheltered happily chatting, preparing veg, having tea, and eating in the humble VJA clubhouse. We had three stoves, the extra one bought by Chani to heat oil to fry pakora. alongside the big pot of vegetable curry cooked by Aftab and another burner for the chapatis.
The rain was unceasing increasing dripping off the edges of the gazebo, bedraggling any who stayed in the open. The sky was greyer than dusk. Everyone helped out digging crops, cleaning and preparing food, cooking and serving it on a steady supply of plastic plates - the young lads from the Bangladeshi Youth Forum in train with Abdul set to with easy enthusiasm peeling, depodding, chopping, helped by Ashok and Jeevan who made up gram flour dough. Amid the gentle bustle and happy fuss things fell in place - an orchestra first dotted with separate tuning, hazards a tune or two and then altogether starts to play. There was food for all; hardly anything left - perhaps some spicy basmati rice at the bottom of one big pot; all else scraped clean, with vegetable preparation trimmings bagged for compost.
Aftab and I feel the whole thing went very well, the first of two, with another in the later summer. For this some of Thursday's participants were pushing for a BBQ that could include meat as well as vegetable. One piece of feedback "Get a bigger tent!" Did people learn as we hoped? Difficult to say. Carole from LegacyWM checking on the whole process collected evaluations from the thirty people there.  Our purpose - from the application for the £200 financial support for two events...


...a pilot project in partnership with Victoria Jubilee Allotments and Legacy WM.  The aim is to raise awareness of recycling, composting, growing food and cooking them.  It will work with young people from the Bangladeshi Youth Forum and older people from B'ham Asian Resource Centre to demonstrate what can be done in people’s gardens and how food can be prepared.  We will host two cooking events in the Victoria Jubilee Allotments and raise awareness of the benefits or eating organic food and encourage people to take similar initiatives in their own homes.  It will also look at the negative impact of fast food on health.

I learned and I enjoyed myself. Fixing the learning, working out how far it worked is less clear, but it's the first event other than our very small Diamond Jubilee Picnic held on the Victoria Jubilee since we began in June 2010. I judge it a good start.
*** ***
Amy and Guy and Liz are in the Highlands; the first time my mother has seen Oliver, another great grandson
"Will you get a photo of you with Ollie"
"He's a such a cheery little soul" she said "I've arranged to buy four chickens from Macpherson, down the road - a pair of Light Sussex and Rhode Island Reds. We can collect them when you come up."