Abstract: We begin with the new observation that banks lend to tax-evading individuals based on the bank's perception of true income. This insight leads to a novel approach to estimate tax evasion from private-sector adaptation to semi-formality. We use household microdata from a large bank in Greece and replicate bank models of credit capacity, credit card limits, and mortgage payments to infer the bank’s estimate of individuals’ true income. We estimate a lower bound of €28 billion of unreported income for Greece. The foregone government revenues amount to 31% of the deficit for 2009. Primary tax-evading occupations are doctors, engineers, private tutors, accountants, financial service agents, and lawyers - professions heavily represented in Parliament. Testing the industry distribution against a number of redistribution and incentive theories, our evidence suggests that industries with low paper trail and industries supported by parliamentarians have more tax evasion. We conclude by commenting on the property right of informal income.

The authors used post codes to plot tax evasion across the Republic. Darker colours denote the worst. In the middle of the circle on the map is Larissa, an area where there are, according to news reports, the largest number of the German Porsche Cayennes in Europe - from a Greek forum:

Table 11 on p.47 compares the distribution of occupational backgrounds of MPs in Greece and Canada. Columns 4 and 7 ("Density") present the percentage of members of parliament in each occupation and columns 5 and 8 present the cumulative density. The authors exclude lawyers 'as the default profession for politicians.' 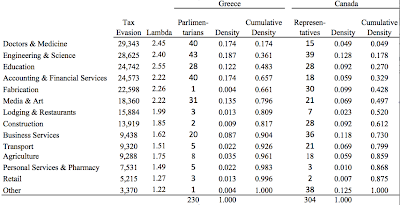 See earlier on Democracy Street: 'the horror ~ how corruption works'
*** *** ***
To London to see Charles Webster of Delta Leisure about progress on the sales of my stepfather's re-issued Out of Town programmes on DVD. Lunch at Seafresh; London charged with pre-Olympic buzz; tiresome commercials from corporate sponsors. I feel detached. I'd like it all to go well and for the 'legacy' side to succeed. I also like the elision of Olympics and Paralympics - the latter clearly no longer a side-show for the main event, with some of those competing in the para-Olympics using prosthetics that make them faster, higher or stronger than those competing in the former. The weather stays grey. I made it back to Euston just as the clouds opened yet again, having bought myself, on the way back, a jacket from Oxfam.
"You smell like a tramp" said Amy the other day.
I'm not good to my clothes - especially jackets. I pick them from charity shops; wear them everywhere until they grow threadbare with worn sleeves, split pockets, threads hanging loose, lining separated. The sweat of my labours from digging mingles sourly with the smell of dog and prolonged periods of rain damp. I excuse myself that the time I spend in the open, refreshes the cloth but Amy was sat close when we went for lunch on Monday. Even I could catch my whiff - which must have reminded my daughter of the derelicts she's often attending to on her urban beat. "Does he smell trampy or just old?" added Richard at the time.
Richard Pine's latest letter from Greece in the Irish Times reminds me the extent to which people on the island and our village and Richard's had supported SYRIZA and were surpised to find the lead taken by New Democracy in the last week of the June election campaign. He comments on the doleful state of Corfu's tourism and makes reference to Paul Krugman, Nobel winning economist, who argues that 'the origins of this disaster lie further north, in Brussels, Frankfurt and Berlin, where officials created a deeply – perhaps fatally – flawed monetary system, then compounded the problems of that system by substituting moralising for analysis.' (My American friend Tony on the role of the Federal Reserve Bank in the US)
I have no illusions about the need for government reform in Greece - especially in health, taxation - it's cheaper to bribe the taxman than to pay the tax...


In December 2011, the head of the Greek Anti-Tax Evasion Unit, publicly described the 4-4-2 system in which the default rule between Greek tax collectors and tax evaders is that 40% of a taxpayer's assessment of evasion would be forgiven; 40% would be paid to the tax agent; and the remaining 20% would be paid to the state...(p.27 op.cit.)*

...and planning, but a whole population is suffering because of habitual corruption in the ruling class of the republic - in which I must include doctors, engineers, private tutors, accountants, financial service agents, and lawyers. The 4-4-2 system has been described personally to me by an acquaintance of someone who speaks of its normality.

But even if the matter of tax evasion begins to be solved, there's the larger problem of an economic ideology which traps intelligent people. I pray there is a solution that selectively feeds the possibility of credit into the thousands of small businesses - including those that rely on tourism - the life blood of the Hellenic economy. But first it seems those in charge of the present drive to absolute austerity must acknowledge that there is 'a fatally flawed monetary system'. It's not just Greece that suffers from that (and I'm not arguing for an ideological Keynesian). I suspect there must be fiscal union. There must be a greater and wider surrender of sovereignty - so that we move towards a united states of Europe, with the most assiduous attention to states rights.


*The main Law Enforcement Agencies combating economic crime in Greece, are the Finance and Economic Crime Unit (SDOE), the service of Economic Police of Hellenic Police (HP) and the Hellenic Financial Intelligence Unit (FIU). The government has established other institutions and authorities with powers to combat economic crime - Public Taxes Services (DOY), the Custom Offices, the Controlling Centers, the Economic Inspectors and the Hellenic Coast Guard (HGC)... extract from Korontzis Tryfon 'The Prosecution of Economic Crime in Hellas', International Journal of Humanities and Social Science Vol. 2 No. 5; March 2012. Tryfon's conclusion acknowledges 'Hellas allocates many controlling mechanisms, however their results in the combating the phenomenon of criminality cannot be considered as satisfactory.'

[Back to the future - 26 July'12 Athens News 'Record rates of tax evasion on islands']
*** *** ***
Danny, a superlative gardener, came to look at our allotment.
"It's kempt" she said.
I beamed with pleasure...There's so much to do and learn but praise is sweet.

This has long puzzled me; an astonishing exchange, replete with an understanding of context - much lost to us; an exemplary moment. I'm very moved by the Greek woman's earnest wit, the mother's persistence, on behalf of her afflicted child and Christ's gentle and astonishing breach of contemporary social, racial, cultural and spiritual conventions. Dogs! "...cast it unto the dogs""Yet the dogs..." Μεγαλύνει ἡ ψυχή μου τὸν κύριον

But Jesus said unto her, Let the children first be filled: for it is not meet to take the children's bread, and to cast it unto the dogs. Ἄφεσ πρῶτον χορτασθῆναι τὰ τέκνα, οὐ γάρ ἐστιν καλὸν λαβεῖν τὸν ἄρτον τῶν τέκνων καὶ τοῖς κυναρίοις βαλεῖν.
And she answered and said unto him, Yes, Lord: yet the dogs under the table eat of the children's crumbs. Ναί, κύριε· καὶ τὰ κυνάρια ὑποκάτω τῆς τραπέζης ἐσθίουσιν ἀπὸ τῶν ψιχίων τῶν παιδίων. It's a most risky joke between two people. If one missed the point it would fall cruelly flat. I wonder if those listening got it - until much later.


Hallo Simon, I have always found that Time, the expression, is misleading. People will insist on measuring, splitting and counting. As far as I can see, things are. Above all, what you are, what you do or make, is. How do you split that into increments? So I will happily take up a conversation of yore! Great pictures of you. I looked at the face under the cap and there in your mouth was our Simon...Best! 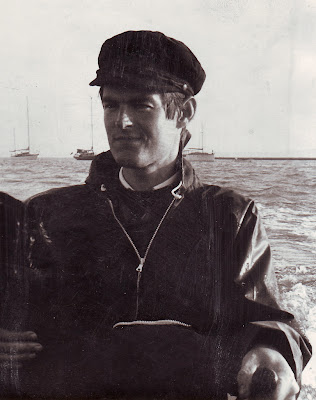 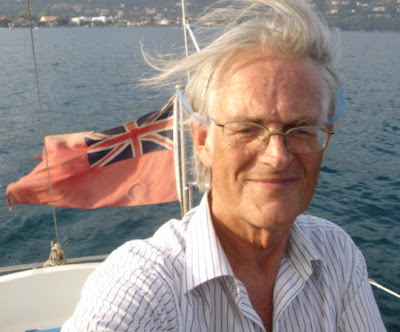