This is a reminder from June last year of how much I had to learn about the craft of digging...

...Coming back to Ano Korakiana after a couple of days digging like that I could hardly move, my spine hurt so. In Venice - on the way - I was hobbling on a stick. For 24 hours I lay on the wood floor at 208 Democracy Street and read. It took me a minute to get up. I couldn't carry a cup of tea upstairs. Since then I've improved my skills greatly. My back hasn't given me such a problem since.
I'm not making excuses. I've found working an allotment - 200 square metres - hard work. I'm persevering. I'm pleased. Four rows of potatoes - 2 of Estima and 2 of Marfona - are coming along nicely, earthed up again this morning. There are rows of cabbages at the front and back of the plot. Lin's started flower beds that are getting rooted. A chunk of the plot is covered with black plastic to suppress weed. I'm starting to fold that back to plant seeds (parsnips, tomato and spinach) in the clearer earth left after 8 months of being covered. 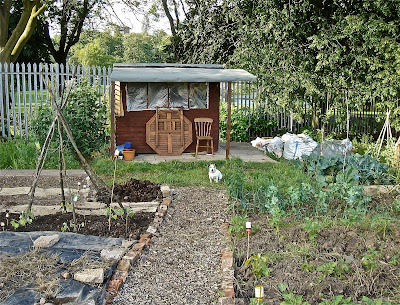 There's a sturdy free-cycled shed on recovered slabs to which I've added a sturdy veranda. I share its use with two other gardeners. We've laid wood chip paths, and I've set out a composting area near the fence between me and the park. I'm growing four rows of onions from sets;..
... my broad beans are coming along well, as are runner beans. Vanley gave me a few lettuce to plant last week. All the time I'm learning. Back in 2011 I dug over the whole plot and removed the larger weed roots. big stones, bricks and other detritus. I'm following Vanley's advice regarding the uncultivated parts of the plot. Let it grow weeds, just cutting them back with a sickle or scythe before they seed, but don't waste energy digging and clearing the ground unless you are ready to sow it. So. I'm working on looking after what's coming along at the moment and being relaxed about what's fallow. It's pleasant to see a large mallow thriving in the middle of the plot. I've planted a vine and five fruit trees close to the shed and just west of the shed I'm preparing a space for where a beehive can go surrounded by Buddleia and scented flowers, now we've been through the initial process of getting permissions from the Council and the site Association. My friend Mike Tye has taken over an area of about 9 square metres to grow potatoes and other greens, on a scale that suits him on a patch in the middle ground of the June 2012 photo. Judging Plot 14 against other plots on the Victoria Jubilee Allotments I would place myself well below the best. These are a pleasure to see. I would also place myself well above plots that are semi-abandoned, ill-worked -  effectively ready to be handed to someone else. I heard recently from the Hon Sec that there have been 28 plots given up; exceptionally high. People take these up as an idea, as a dream - having little idea of how much hard work is involved. I did know this would not be easy. There were times when I got to a point of not wanting to go out to work on the VJA, but since the major digging has been done and - perhaps most important - I've been tutored in gardening; learning how to be more efficient, and we've started to eat food grown on the allotment, I know that barring disability, I've turned that corner. This is going to work out.
Pulling and digging couch grass up by the roots needs attention to detail, but every time I gently haul out another length of those shallow white roots with their keen little rhizomes I think how much work the next lot of couch will have to do to get that much hold again. One hour on hands and knees among my onions and I've teased out couch grass that will take weeks, maybe months to regrow. I've been told that if one keeps on removing it - widespread though it is and tedious though it may be - it will eventually cease to be such a problem. I can hoe it away when its seedlings appear, because its spreading roots once removed need time to re-establish themselves.
*** ***
My choice of Estima and Marfona arose from the pleasure I got from the baked spuds with a rich serving of butter sold from the Dinky Donuts stand in the Birmingham Rag Market for £1.50; £2 with a cup of tea. They know I like the skin nearly burned - firm almost crispy. I eat the lot.

Amanda, there, told me their choice of potatoes for baking. These are the seed potatoes I found in Oldbury via the web and which should be ready to lift in another month.
*** *** ***
Tomorrow is the last day of Edward Burtynsky exhibition Oil at the Photographers Gallery in Ramillies Street London. Burtynsky has taken pictures of landscapes scarred by the extraction of oil, and the cities and suburban sprawl connected with its use. 'In no way' he writes 'can one encompass the influence and extended landscape of this thing we call oil.'
Tom Clark's blog Beyond the Pale shows some more of Burtynky's powerful work, as does this record of an interview with him. (See also Marc Augé Non-Places: Introduction to an Anthropology of Supermodernity, The Axis of Hypermobility, and John Adams on the Social Consequences of Hypermobility)
*** *** ***
Minoti Chakravati-Kaur has emailed me from the Western Isles - places off the high west coast of Scotland I've never visited: 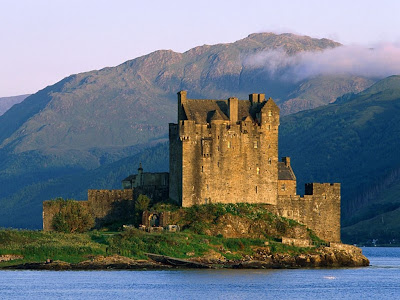 Dearest Simon. Early morning in Portree at the Isle of Skye and just getting ready to set out for Brin Croft and on the way to see the iconic castle of Eilean Donan. I am blessed with a desire and God has gone along with it and so a price has to be paid. See how you and Theodora have enriched my life. 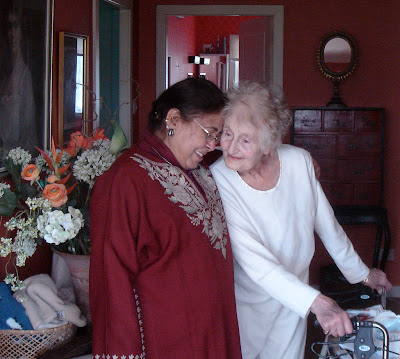 Yes I will leave the shirt in its fabIndia bag with Theodora. I will also give her a shepherd woven shawl which I thought she could throw over her shoulders when she watches TV. I will take as many pictures as I can in Brin Croft where we hope to reach at around 3 pm and will try to video record her for a little while if she allows us to do so.
Chicken coup? wow that is what I have wanted to do for a while.
I will certainly send you the photographs we have taken on Lewis and Harris - I have never seen such white sands in my life before and the colour of the sea around them in shades of turquoise and blue and green and a mixture of all three such that I cannot even describe adequately. We had to video record them as it was impossible to capture the sight on a camera in one shot.

I also wanted to show you the Harris Tweed I have bought and some wool to knit waist coats to match with them. The herringbone design in charcoal grey. I literally tracked down weavers and saw them at work on their looms on Lewis and Harris and made friends with them all. One of them Donald Mackay will be receiving the MBE award on Monday. It is fascinating and I intend introducing the Gaddi shepherds to the idea as they too have looms but have not been able to continue against the competition they have against Australian merino and fluctuating wool prices in the world. That is why I would like you to see Theodora's shawl it has come from the loom of a Gaddi shepherd whom I befriended in Delhi when he comes down with those shawls.  Will write more after I reach home in Langford on Tuesday. See you then and stay happy and cheerful. Love from your friend Minoti

*** ***
I'm over halfway through Vikram Seth's A Suitable Boy - begun in early May. I've just been sent my copy of Lawrence Durrell's - until now - unpublished novel Judith, edited and introduced by Richard Pine, who's been involved in helping organised celebrations of Durrell's Centenary in Corfu at the Durrell School. 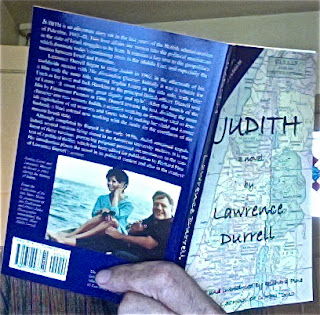 It's set in 1945-48 in the final years of the British Administration of Palestine. Judith is a scientist refugee from Germany 'working on formulae vital to Jewish exploitation of oil reserves...' The other part of the plot has her Nazi ex-husband helping the Arab's to resist the arrival of the new state of Israel. Do I want to read this? I can't quite see how it's going to end.  In January 2009 Dhiaa and I had an exchange about Christians, Jews and Arabs...


'I think the three main world religions (Christianity, Islam and Judaism) can and must save the world' he wrote 'because they are also capable of destroying it.'

*******
How I miss dear Ano Korakiana for all my delight in what I'm doing in England. Thank goodness for the chance to glimpse the village website by Thanassis Spingos....
Βαφτίσια χθες, Κυριακή το απόγευμα, στον Άη-Θανάση...a baptism, Sunday evening in Ano Korakiana, in Ag.Thanasi, which among its 36 churches, is the 'cathedral', η «μητρόπολη», of the village, priest Kostas (who back in February promised a prayer for Oliver) baptises Αγγελική... 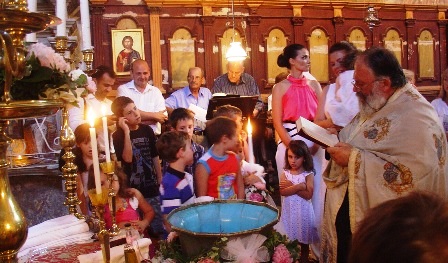 ...Angela, daughter of Stamatis and Marcella, κόρη του Σταμάτη και της Μαρκέλλας. After the ceremony, through the summer dusk and late into the summer evening, a crowd of guests enjoyed a rich buffet in the courtyard of the church (my translation)
My note: In the Orthodox church baptism is the same as christening. A child has no formal or shared name until this event, being called 'the child' or 'baby' until it's immersed, unclothed, into the big bowl. The more the toddler screams the better. Devils are being driven out. In fact at all the Greek baptisms we've attended this ducking isn't anything like as traumatic as it sounds, with parents and godparents and sisters, brothers and cousins all about, plus lots of hugs and embraces in a big dry towel and the water tested to ensure it's the same temperature as a baby bath.
*** *** ***
I see a new jargon phrase on the horizon - 'moral mobility' - as the Pharisee said in that salutory lesson, I have long known that as an urban cyclist I am not as other men are...Seriously tho' I reviewed a book and two policy reports over 10 years ago on reducing autodependency, and here I'm scanning a piece of research happy to refer to 'moral mobility'.