There are three blogs in English I rely on for news and thoughts about Corfu, Greece and the world - via them and the hyperlink that can turn one sentence into a tapestry of reference** across which I can roam with the ease of a monkey swinging through the canopy of a rain forest. I’d start with Richard Pine, founder of the Durrell School of Corfu, author among many other things of The Diviner, a major work on the Irish playwright Brian Friel, guest lecturer on campus's around the world, but though the opinion goes unsaid, Richard regards blogging as somewhere on a par with glue sniffing, so we get, instead, regular emails announcing a fascinating, informed op-ed in the Irish Times, (in which even he does not eschew an occasional hyperlink, inserted, I suspect, by an editor in Dublin) and I’m told there’s an unpublishable manuscript on Corfu.
Of the blogs, the least introspective is Teacherdude’s, citizen-journalist Craig Wherlock, based in Thessaloniki, also on Flickr, exploring with camera - un-pressed. His words are from the left; seemingly without dilemmas or historical perspective, but his pictures brilliantly catch contradictions others write about.
A blog of greater economy, Corfu Blues - writer, poet, musician Jim Potts is Philhellene, citizen of an imaginative Greek landscape; seamless elision of classical and modern Greece. enduringly married to a dear and talented Corfiot who's also a writer. Jim’s more perfectly that English invention André Maurois describes – a gentleman - than I; discretely, unashamedly in love, as open-eyed with Maria about Hellenic depravity (her Jeremiad against the corrupting greed of fellow Corfiots) and weakness as Homer, and with the best links to intelligent contemporary analysis – especially his relatives Bagehot and a TV journalist daughter, Nina-Maria.
Most entertaining is Corfucius, musician Chris Holmes (died in Corfu - January 2018)..., 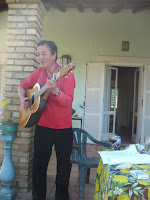 ...the uncourtly courtier, son of a war hero, on a perch above Kontokali, apt with a keyboard, does acrobats with grammar as conjurors spice their acts with mistakes, issuing lasciviously illustrated comment on gossip in Britain’s reptile press, reminiscence – un-English revelations about family perfidy - and invention, revelations about sins of lust and alcoholic indulgence cleansed by the Church of England in Corfu, he’s the Greekest of the three, son of an exceptional mother only now gone to her long home, he's silent on anything as tedious as ‘the crisis’, venomous on anything as worthy as housework or gardening (honouring Lin and I with the monicas - Charles and Carrie), a sweet recluse, seductive misanthrope, artful in flattery. How pleasurable it would be to get these three together for a day. Impossible because Potts is likely to be in Dorset while I’m here, or I’m on my allotment in Brum while he and Maria are in Zissimos; Wherlock’s a teacher - too poor to travel, too proud to accept expenses - and Holmes hates company.


**I know I know, human expression has always been able to perform this miracle of resonance, the poet’s auditory imagination, musician’s leit, the painter’s reference in colour and form…but we tap into a level of intra-species communication that Fred Emery and Eric Trist anticipated forty five years ago as ‘a greater mutation than if man had grown a second head’ p.217 ‘The Next Thirty Years: Concepts, Methods and Anticipations’, Human Relations, 1967, 20

** ** **
I'd been in Gatwick overnight so slept on the Easyjet south, and woke to see blue, aware of islands*, Erikoussa passed below, then the north coast at Sidari, the zig zag road down to Trompetta, then Skripero and Ano Korakiana.

Later at Easter lunch in the village, Mark said "We saw you coming over. 'That'll be Simon and Lin!'"
A cup of tea in the house, greetings to Effie, Vasiliki, Natasha and Adoni about to start their Easter lunch, and we strolled up Democracy Street to watch our lamb turning on the spit 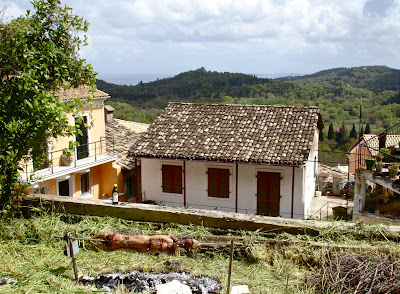 The table sat twelve, a mix of Greek and British, both languages mingled, wine and beer and then the food.
Around five I was being teased for dropping off, sometimes mid-sentence, feeling the effects of little sleep, happy company, food and wine
"Yeah! And being old" said Lin.

*A phrase I stole
At my peril
From the poet
Lawrence Durrell
*** ***
On Tuesday we woke just before noon - which stills feels like 10 GMT. There was an email from Charles Webster at Delta:


Hi Simon. I thought you might like to know that we have a signed, sealed and delivered contract with Endemol for the 34 Out of Town episodes. Our copies of the original nine DVDs, formerly from Contender, go into shops from this week and we expect to see sales immediately. I think these will be the only products in the market for at least six months as we work out the best way to sell the “34 missing episodes”. I am delighted that we have done the deal with Endemol and I hope they see the wisdom in sharing their royalties for the “34” episodes with you. Fingers crossed. Now you have the tapes back from the SWFTA perhaps we can look forward to more releases in the future. See you soon. We should celebrate with fish and chips and mugs of tea! (Sound like the Famous Five…..) Regards, Charles

Dear Charles. Wet and grey in Corfu. Thought that might please you (:)) My chief worry about the letter to Cathy M to which she’s not yet replied (18/4/12) was that it might distemper our friendship given I was questioning Endemol’s right to buy and sell the ’recovered' episodes on the grounds Southern TV or its agent had no right to sell them having agreed to sell them to Jack for £1 in lieu of pension. Instead you approved my letter. Furthermore, given present understanding of rights in relation to these tapes you had no obligation to even tell me of your intentions or indeed the progress of your plans to complete a contract for their distribution with Endemol. I don’t call that just good customer relations...Now the tapes and the film from Plymouth (minus Old Country masters which I let David take home to Hythe to look over) are in Birmingham I am waiting royalties on the re-issue to help pay for the transport and storage. These expenses are not that much but I want to keep accounts and could even afford to buy you the next lot of fish and chips (I owe you four of those so that we’re even).
There’s also the simple fact that we must transfer any film and tape we think may match to digital before splicing them, as to do that operation with raw film and tape over 29 years old is just too risky. At present I’m only at the stage of trying to get shelving installed in the store locker so I can take the film cans and tapes out of the boxes in which we transported them and line them up so that possible matches of image and sound can be surmised and a batch of - say - five can be taken somewhere to be digitised and hopefully matched. David Knowles, as you can see on the short video I made of the transfer, knows as much as anyone I know about this material and the challenges of creating workable matches. A lot of it has his writing on it. He is hoping that the letters and numbers on the cans and tape boxes will be good enough to identify potential matches, but given how little they did at SWFTA I am wondering whether he is right. I’ll start on this in June. Congratulations on the whole project of the 9 DVDs...Simon

Hardly dressed we heard the band approaching, marching down Democracy Street and around the village boundaries to finish with sweet bread and wine at St Athanasios.
The road was closed to cars, so I cycled down to an appointment a mile below the village with Mark and his brother Paul, to see and touch a 70th birthday present to myself - a new or rather nearly new - well - wonderfully re-conditioned engine for Summersong which Mark had been seeking in the secret workshops of Corfu, relying on word of mouth...and now after nearly a year it was here, looking spic and span with new pipes and belts and all attachments - starter, gear box, alternator - a Yanmar 2GM, about 18hp. At my age I need a reliable engine, and one more powerful than the present ageing 9hp engine in the boat. The regular calms are one problem; the other's getting home in half a gale on the nose.

I’m lucky and wise in my friends. These skilled guys work year round, often, and certainly for the season, six days a week - often at weekends - applying their energy, craft and experience to mending, making, building, maintaining, transporting, checking just about everything – heating and electrical systems, all types of yachts, all kinds of engines, every sort of building. They’re all round grafters who do work, work, and more work, and yet they took the trouble to track down this engine, the means by which in my pension years I and my friends can continue to mess about in boats on the mercurial sea of Kerkyra. I left out other gifts, since it wasn’t immediately my point - knowing how to be friends, playing a full part in preparing food for delicious eating, hunting and fishing, tending stock, looking after the land, studying and knowing the wild things – insects..

...plants, chickla, raptors, the lively repertoire of our Greek garden, entertaining, speaking another language, being in and of this village, conversing and drinking and – to embarrass them – sharing their lives with women of equivalent and complimentary art and skill. 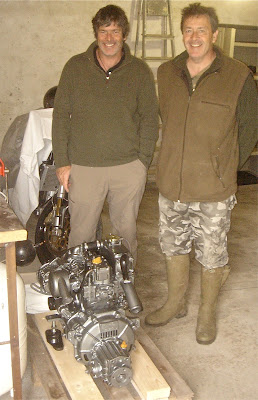 Cycling home I bumped into Dr Savannis getting into his car.
"Have you collected sweet bread from the church?" he asked
"No"
He handed me a loaf. Mark had given me two new laid goose eggs from the stables, and I reached into the cycle basket and gave one away.  Later Lefteris arrived next door - back from the church. We embraced and he too gave me sweet bread. So to work, Lin tidying and weeding the garden, while I cleared greenery along the path below that leads to the bus stop. Swallows are all about feeding inches above the ground, bells are ringing, bees exploring despite the wind and wet. 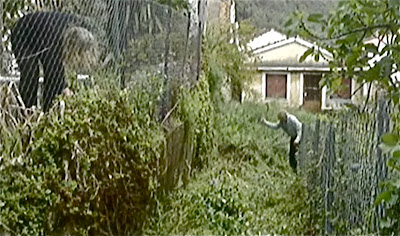 Wesley up the road had made a damper for our stove chimney. Re-installed it's already saving fuel - in this wind you hear the draft slowing with a turn of the small handle mid-way up the pipe