Our shed and all it contains 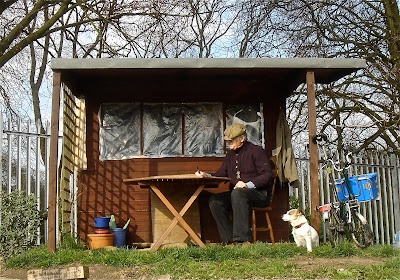 Katzanzakis wrote 'Να αγαπάς την ευθύνη. Να λες: Εγώ μονάχος μου έχω χρέος να σώσω τη γης. Άμα δε σωθεί εγώ θα φταίω' 'Love responsibility. Say: It is my duty, and mine alone, to save the earth. If it is not saved, then I alone am to blame.' Arundhati Roy - my heroine - is especially good on wealth made through plunder in alliance with bribed governments.


'Capitalism’s real “grave-diggers” may end up being its own delusional Cardinals, who have turned ideology into faith. Despite their strategic brilliance, they seem to have trouble grasping a simple fact: Capitalism is destroying the planet. The two old tricks that dug it out of past crises -War and Shopping - simply will not work.'

Alternatives to state-market collaboration are many. They are diverse; less visible for being, like bacilli or viruses, small. Wander through work associated with Elinor Ostrom:


...contemporary research on the outcomes of diverse institutional arrangements for governing common-pool resources (CPRs) and public goods of multiple scale builds on classical economic theory while developing new theory to explain phenomena that do not fit in a dichotomous world of 'the market' and 'the state.' Scholars are slowly shifting from positing simple systems to using more complex frameworks, theories, and models to understand the diversity of puzzles and problems facing humans interacting in contemporary societies...

Ostrom challenges widespread scepticism about community self-organisation in managing common pool resources (CPR) - 'game theory' and the 'tragedy of the commons'. Both paradigms suggest people can't be trusted; that either the market or the state or, in Roy's analysis, state-market collaboration, are essential antidotes to the chaos that is inevitable if people are allowed to self-organise. All of us educated by The Lord of the Flies are nearly right. Our hope lies in the dream that they-we are not absolutely right. Ostrom and her colleagues at Indiana, but also quite separate researchers, have analysed cases of failure, semi-failure, partial success and success from all over the world in governing common pool resources. Shared learning and diffusion of that learning is beginning to upset the traditional model of rich-to-poor aid. We 'rich' have much to learn from cases of self-organisation driven by the pressure to survive -invented and sustained in poorer countries. Seek out examples to move away from looking only to state or market, capitalism or communism.
I should have avoided the word 'allowed' in the context of 'self-organisation'. Even as they may promote it (Big Society for example) governments and corporations will undermine it in the way Roy describes, with seduction and - if forced - violence, preceded and accompanied by subtle and relentless spin. (a mild example: central-local double-speak in the case of UK local government by my friend and colleague Chris Game)
**** ****
An email just received  an abstract I submitted for an academic conference in Minneapolis next September:


Thank you for your submission in response to the call for papers for the upcoming Creating Public Value in a Multi-Sector, Shared-Power World conference. We received a remarkable response to the call, with many strong papers.  After careful review... (at this point I know it's not good news)...by faculty advisers from a variety of fields, we regret to inform you that your paper was not selected for inclusion. However, we hope your interest in the creation of public value will inspire you to attend the conference September 20-22, 2012 in Minneapolis, MN, USA. You can access the conference website and registration information here. Thank you again for your interest and your commitment to the study of public value in a multi-sector, shared-power world.  Kind Regards, John Bryson, Ph.D. McKnight Presidential Professor of Planning and Public Affairs

When it comes to applying for jobs, submitting papers or a thousand other endeavours I assume anything from a 10-1 failure rate upwards.  This doesn't mean I'm not miserable, vexed and chagrined - switching between 'sour grapes' excuses to myself and recognition my abstract wasn't interesting enough:


PROBING THE HEART OF DEMOCRACY WITH VIDEO...In the working conversations between politicians and administrators in government, values, whether as means or ends, are seldom spoken directly. Research access to such conversations...though a popular focus of fictional drama, is problematic. Since the 1980s, Baddeley has been refining methods for exploring how local government politicians and managers work together at what Weber called the greatest source of tension in the modern social order − the relationship between democracy and bureaucracy...As the methodology has been refined, it becomes easier to record the way values are embroidered into conversations about what is technically, legally and financially workable. Film has the benefit of recording verbal, non-verbal and para-linguistic exchanges, allowing minute examination of their dynamic. While film provides no special guarantee of unique authenticity, (the) methodology determines a contract between researcher and participants and their future audience which frames, for further investigation, an exchange between them that is always going to be a performance – but one that the participants are prepared to have presented for analysis as part of the value to which those involved in a public relationship of government...are committed.

...and on to Lydbrook six miles further south on the edge of the Forest of Dean, where Royston is slowly and steadily making repairs to Rock Cottage. Since the children grew up and we started living to and fro - πέρα δόθε - between Ano Korakiana and Handsworth, we've neglected it. It's up Bell Hill, way up a steep narrow path some way from the highway, now nigh impossible for our parents. 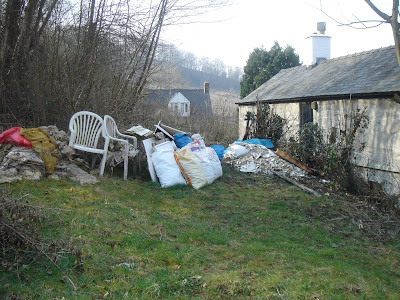 There are few builders we've trusted as much as Royston. We suggest work; he assesses it; sends us a quote; we approve and refine the detail; he gets on with the work; lets us know when it's completed; we pay and discuss the next stage. Our neighbours - Kirsti and Paul -  a few yards away also keep us informed on the work, which started from the outside stopping ways in which damp had been entering some parts of the upper floor. With the roof and eaves sealed, there's a lot more to do. 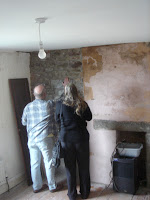 A ceiling has been replaced in one bedroom, a wall lined in another, and now Royston will set about giving us a quote for replacing several window frames, two doors and sealing and painting exterior walls.
"When that's done we can stay here again" I said
"...and Amy and Richard will come without us."
"That's fine. That's OK. They'd never let us sell the place anyway."
Our hope -  to have all work completed by Summer 2013.

*** ***
The best article I've yet read on the enormously sensible Greek Property Tax, written last September but updated by An American in Athens - a superlative blog. Her article carefully copyrighted, long and rich in detail and illustration, especially on interpreting information about the tax as it appears on electricity bills, measuring properties, exemptions (for types of disability and property), penalties for non-payment, multipliers based on zone and house age, appeals against assessment, future changes currently planned - including the spreading of payments over the year and a future shift away from collecting the new property tax via electric bills to separate bills - likely to start in 2013. People like us, as my grandmother used to say, ought to pay rather more tax, especially death duties. I agree even as I make as sure as I can that I have checked legal means of not paying. I have a relative who regards all tax as 'theft'; does not believe there is such a thing as a public good and regards HM the Queen with her persistent sympathies for the less well off as a dangerous left-winger. 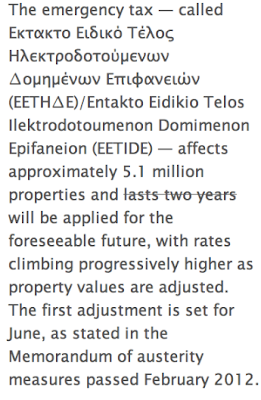 *** *** ***
My mum's had a chicken run built at the end of her house, robust enough to keep out the Pine Martin - more of a threat than fox or rats in Strathnairn. Once the risk of a final cold spell is passed her chickens will move in - four or five now her carer's approval is won. 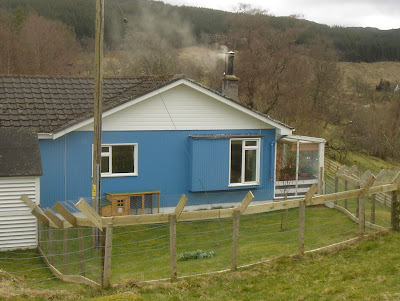 "Fine" said Sharon "as long as there's no cockerel"
"I'm going" mum told me "to have a pair of Rhode Island Reds and some of those speckled Scots Dumpies." 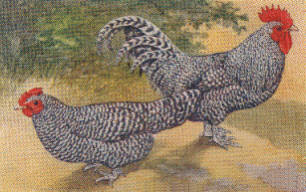 
Η προσπάθεια συνεχίζεται αμείωτη...efforts continue unabated...following last Sunday's Agricultural Cooperative AGM, the registration of new shareholders...with a strong probability the necessary numbers will be recruited by the end of the month. Several young people have responded to the challenge, as well as subscribers from the wider region. Some cases remind us of the situation (one of many) when the family of Kontostanou Chariklia, in the 1930s when the Cooperative was striving to expand its facilities in an even more difficult economic environment. Shareholders took out mortgages on their properties to guarantee the loan needed for the Cooperative...So when, at Christmas, Kontostanou Chariklia's mother had tried to "sacrifice" one of her chickens to make lemon sauce,  αυγολέμονο, her husband had to stop her; telling her the chicken, and indeed the whole coop, was already mortgaged for the Co-op....below, a jar of sweet figs to go with Mrs Metallinos' recent registration