Secularists, atheists, anthropologists, sceptics and the curious! So many in Corfu are called Spiro and indeed are christened so across Greece, my own brother-in-law included - his family traced to the island as makers of tents. Lawrence Durrell wrote 'The island is really the Saint: and the Saint is the island', Saint Spyridon of Tremithous, the patron of Corfu whose 'love of work was amazing' who...


...with the fruits of his labour helped orphans, widows, the poor, the disabled, strangers and others… in a humble way making himself an example of abstinence. It was characteristic of him that he prayed to God the Lover of mankind regularly and at every possible opportunity. He looked after his fields and his flock of sheep but also his fellow men. He fought in a Christian way the existing pettiness and malice of others. Not only did he honour his people but he was also able to judge them...

The words are from a recent translation by my friend Aleko Damaskinos of a biography of Saint Spyridon, Ἅγιος Σπυρίδων, by Michael Lykissas, who recounts some of Spyridon's miracles while he was Bishop of Tremithous in Cyprus in the 3rd century BC, adding more that have happened before and since his bones came to Corfu.


A farmer was too poor to buy wheat seeds. He spoke to the saint who replied with heartening words, going to meet the farmer the next day and offering him a gold piece to mortgage for seed, telling him that after the harvest he must return the weight of seeds he’d borrowed to the lender and the gold to the saint. After a successful harvest the farmer did as agreed. Spyridon prayed to Christ, to transform the gold back into the serpent – symbol of Satan - from which it had originally and miraculously been transformed. So it was.

During evening prayers the oil in a church lamp ran out. The Saint did not want the service to be interrupted. He prayed and with God’s blessing the lamp oil overflowed.

Spyridon arrived one night at a deserted church - no congregation; only a deacon and sacristan.  With a congregation, when the priest says “Peace unto you” the congregation replies “and to your spirit”; after prayers they answer “Kyrie Eleison.” In this empty church, when the Saint chanted this night, angelic voices and divine music answered the Saint, replying “Kyrie eleison” to the blessing.

During famine merchants hid their grain until prices rose. The starving head of a poor family pleaded vainly with a merchant to show compassion. The poor man went to his friend Saint Spyridon who told him the rich man would very soon find himself in difficulties; that he would be urging the man to take all the grain he needed. That evening torrential rain washed the grainstocks into the streets. People rushed out to recover what they could. The rich man urged the poor man he’d spurned to take what his family needed.

A seafaring captain needed a loan. He begged it of Saint Spyridon, who loaned him gold normally kept for repairs to church buildings, helping the sick, supporting orphans.  The captain traded, made a profit and came to return the loan. Spyridon showed the captain where the gold was kept and told him to replace it himself. The captain did this and took out further loans. One day he didn’t put back the gold he’d loaned, lying that he had. His business began to fail. He asked Saint Spyridon for another loan. “Go and take the gold” said the Bishop. Pretending innocence the captain went to do so, returning to say he couldn’t find it.  The Saint confronted him with his dishonesty. Deeply shamed, the captain acknowledged his deceit.  Saint Spyridon forgave him.

A sailor, fellow citizen of the Saint, returned home after a two years to find his wife pregnant.  He took her to the Saint who advised her to repent.  She refused to acknowledge any fault. Saint Spyridon cautioned her again. She denied any wrongdoing. The Saint told her that her child would never be born unless she confessed. Once home she was overcome by great pain and died. The Saint was much saddened she had not listened to his words.

Sofronia, the wife of a pagan, was a Christian. She asked the Bishop to convert her husband. The husband was enjoying a meal with the Bishop when a farmer arrived with a message from the shepherd who watched Spyridon’s sheep, saying he’d fallen asleep and they’d wandered. Spyridon reassured Sofronia’s husband that another message would soon arrive to say all was well. As the farmer was leaving, the news came via another messenger to say the flock was safe. The husband was so impressed by the Bishop’s calm prescience, he thought him a God and wanted to sacrifice animals. Spyridon explained to him the nature of God. “I receive strength to know things ...before they take place. If you acknowledge and confess to the Lord, you will be acquainted with his kindness and omnipotence.” Sofronia’s husband asked to be baptised.

Michael Lykissas recounts a score of miracles since the Saint died - of blind Theodorus, of the pious and sickly Cypriot, of the cancellation of Pisani’s anti-Orthodox plan, of the blind rowers, of the healing of Dina Rarakou, of the paralysed German soldier, the rescue of shipwrecked Greeks in the Atlantic, the dumb woman from Thesprotia, the epidemic of cholera, the possessed woman from Cephalonia, the paralysed woman from Zagori, the ending of a drought and many more...
*** *** ***
No-one would tell me whether it would or would not rain. Mark had shown me progressive weather maps – shapes advancing over the Adriatic; beige over blue, silhouette of a lion, of a woman’s face. “Looks as if Corfu will miss the bad weather”.
Gazing at the morning landscape I hung a wash in the garden. As I started sawing firewood, rain that might have held off, settled in.  I whipped the laundry off the line; laid it over the horse upstairs in front of the stove...
...and went back to sawing in the shelter of the balcony, chopping kindling with the billhook. 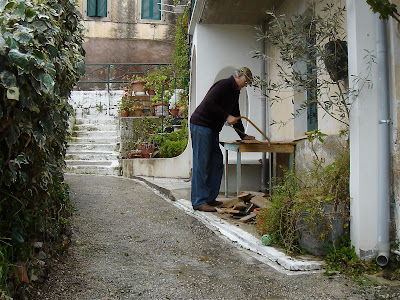 Last night, after a night of strong wind and rain I checked Summersong in Ipsos harbour. Stones and gravel on the digue had been washed on to the track and over landing stages. My Greek courtesy flag was shredded. The cockpit cover had ripped from the boom, leaving it to collect water, pressing heavily into the cockpit, straining but not breaking its eyelets. 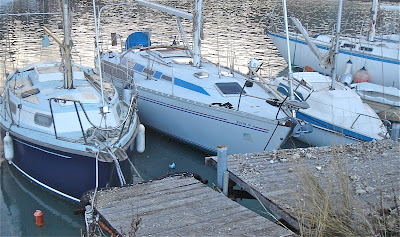 I bailed out several gallons of rainwater. Everything was dry underneath; the self-draining holes clear. Errand; wait for the next clear day and get that cover re-sewn, stronger. I feel such affection for this old boat, whose purchase bought us to Corfu. I want to be able to take her out, but I have to get a more powerful and reliable engine for her. The chances of getting that done have receded with the return, soon, of Ollie who advised us last year, to Australia, his visa run out.
I dropped into Sally’s Café for a beer and toastie, to use their WiFi, to send a strong letter to one of my step-father’s publishers:


…. if you do not… I will have no alternative but to exert my rights as owner of the copyright and …If at some point in the future we clarify the legal situation we can set the conditions for an agreement … suits both of us…It’s not at all comfortable for me to write to you in these terms, but we must leave personal issues aside and resolve … your prompt attention …the immediate return of my intellectual property… it is essential I focus on these matters….etc….ouch

I’ve been measuring journeys. I can get down to Ipsos on the big bike in 15 minutes, back up the hill in 45...

...marking my ascent by two of the roadside shrines - kandylakia
I got from our village to Kafeneon Mitsos at Nisaki in 50 minutes the other day...

...so given just a few long hills before Kentroma and above Kalami it’s only about the same distance again to Kassiopi, then a more or less level corniche to Perithia; the same again to Acharavi – 22 miles from Ano Korakiana. Would I then need to retrace my journey or could I come back over the mountains from Acharavi to Episkepsi, Sgourades, Zigos and Sokraki – just nine miles? With sensible stops for picnic, drink and rest it could be a pleasurable day’s adventure – about 4 hours to Acharavi, and three and a half more for the short steep winding journey – as the crow flies hardly more than Ano Korakiana to Nisaki - over Trompetta. If I can’t sail, I can cycle. If I get worn out, overjudging my strength, I can leave my bicycle with a friend in the north and return by bus; coming back the same way the next day to complete the ride. I suppose I could do it the other way round, doing the 29 hairpin bend ascent – one I did last October in under an hour - to Sokraki for the start of my journey
*16/2/12: Sophia told me that at least one, maybe both of these little shrines, are not kandylakia, but mark churches reached by paths some yards off the Ano Korakiana road - one of them called Agios Panda.
Posted by sibadd