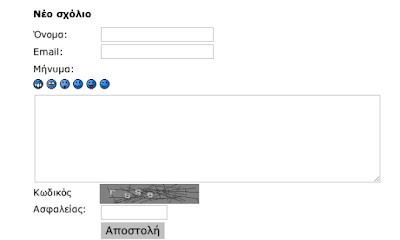 I want to remind myself of words and phrases that accompany posting to a Greek website - in this case Ano Korakiana's. These may be helpful given that translation programmes - like Google Translate - do not cover translation of commands and responses on the site. Normally, names, emails and security codes are written in the Latin alphabet - ABC - rather than the Greek - ΑΒΓ. It's fine on signposts for Greek places to help a foreign traveller, but as a rule I don't like using Greeklish - phonetic transcription of Greek in Latin text as in "Yasoo" or "Efharisto" rather than «Γεια σου» or «ευχαριστώ»

Το μήνυμα σας αποθηκεύτηκε. Θα εμφανιστεί μόλις εγκριθεί από τον διαχειριστή - Your message is saved. It will be displayed once approved by the administrator.

Δείτε το σχόλια - View comments
*** ***
The other night my sleep was fitful. I was at supper; elegantly dressed guests. White tablecloth. Bright clear water. I held my breath but after a while could do it no longer. Not wanting to seem gauche I gently allowed myself to float slowly upward hiding the fact that my lungs were bursting and I was on the edge of panic. I rose far too slowly noticing the table and its guests receding below me. Just before I began to flounder I woke.
"I had a weird dream" said Lin. I didn't mention mine, in the aftermath of my embarrassment.
"I was walking in a town. Wearing nothing. I was rather embarrassed. You said 'Don't worry. It'll be alright nobody'll notice' You walked in front. I saw a piece of material like a sarong lying on the ground so I picked it up to wrap it round me because I felt people were staring. I stopped to put it round me. This woman stopped and between us was a square drain. She was holding a stick. I said something to her.  I looked at the drain. The sarong dragged into the water. It was all wet at the bottom. The woman said 'Yes but I'm going to kill this cod' and I saw the silhouette of a large fish swimming below the surface. She raised her right hand with the stick. I woke up."
I told Lin my dream
"That sensation of suffocating."
I've not known it since I was a child. These are amniotic.  It's worry and excitement; apprehension and anticipation."
*** *** 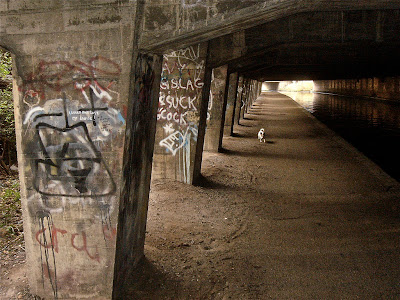 I cycled with Oscar to an office on the Tyburn Road to check over the equipment and files held by an accountant who's rather abruptly resigned his chairmanship of our credit union. The route on the road is ugly, traffic ridden through Birmingham's leadville, but I travelled via the towpath of the Birmingham and Fazeley Canal, up to Aston, under the clanging concrete overheads of Spaghetti Junction, Oscar running with me. Both contented. Next to the office on Tyburn Road was a dirty spoon café - difficult to find in the city centre. I had a fried egg on toast and a mug of tea scanning stories from an abandoned redtop until it was time for my visit. The woman behind the counter went out to fuss over Oscar, waiting patiently in the pannier of my bicycle leant against the window. Having got a measure of what needed moving, we headed home the way we'd come passing under the self-store warehouse that reaches over the waterway to rest on fifty four squat pillars, reflected light dancing on the opposite wall, inaccessible and unmarked. 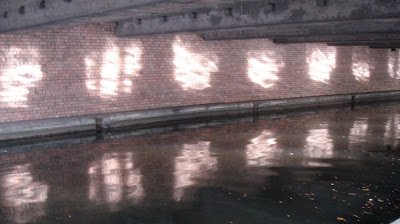 *** *** ***
On Monday that relentless actor in the global economic crisis - the rating agency Standard & Poor's - threatened to downgrade the credit standing of 15 of the 17 euro nations, including France's and Germany's AAA listing...

Come Thursday-Friday's latest do-or-die Eurozone summit in Brussels, we draw closer to the moment when historians may record that it was decided to maintain or end the idea of European fiscal union:


....With the fate of the 17-nation single currency at stake at a summit this week, 20 years almost to the day since the Maastricht summit at which European leaders agreed to merge their monies, the same battles are still being fought out. Between sovereignty and federalism; between 'stability' and growth; between more solidarity and stricter discipline; between a directorate of big states and a more democratic organization for the continent; and between a tightly-knit "core Europe" and a broader but looser union. The outcome of Friday's 27-nation European Union summit may determine the course of the world's largest trading bloc. One road leads to a core group of euro zone states forging ahead with closer integration; another to a continuation of the current, multispeed Europe limping along at the pace of the slowest in the convoy; and a third toward a potential breakup of the currency and disintegration of the Union.

*** *** ***
In readiness for a session on our scrutiny module next week I'm preparing a morning with my colleague John Cade, leading a discussion about political-management working relationships. with a film I made in 2009 of John at work in Birmingham City Council.

A conversation, recorded for Birmingham University on 10 March 2009, between Cllr Alistair Dow, Chair of the Scrutiny Co-ordinating Committee of the City Council and his lead officer, John Cade, Director of Scrutiny; video streamed with permission of the participants, solely for teaching and research. The film divides into four sections.

Each extract deals with aspects of the way a politician and an officer, with key roles in Scrutiny, work towards decisions about the working of an important local government function.
*** ***
At Lozells Methodist Church in Lozells Street a number of us met to try to thrash outs ways of setting up a Community Development Trust. The cost of the meeting came pout of the last of this year's Community Chest* for the ward. There's always a sense on these occasions of re-inventing something for the umpteenth time, but it's good to meet new people and see old acquaintances and talk about the places where we enjoy living; rehearsing what matters and where and how- ten years hence - we'd like things to be. I find the company the better for the fact that there's minimal chance of money coming to the area, that as the recession continues the various communities and non-communities of the area are whether they know it or not to be forced to be more self and group reliant, thrown back on our own devices, which isn't so bad.
Cllr Waseem Zaffar posted on Facebook:


Excellent session at the ward visioning workshop led by the North West Birmingham Development Agency on developing a partnership arrangement for third sector and resident groups across the ward. Fantastic attendance from local activists who offer so much expertise, skills and knowledge. Many thanks to all those who attended including Michael Brown, Aftab Rahman, Dilbagh Dham,i Doreen Osbourne, Jo B Midland Heart, Gharib Bani, Khalid Mahmood, Simon Baddeley, Sajid Shaikh, Shahida Choudhry. So proud to represent a ward that has so many active residents! THANK YOU!

*From Cllr Mike Whitby's speech on the state of the city in October'11: We are taking forward the Localism Agenda placing Ward and Constituency Committees at the heart of the Council’s approach to localisation, and by doing so the City made a commitment and allocated £4m Community Chest across the 10 Constituencies ensuring that decisions made locally could also be funded locally. We have continued to see support on a local basis for such things as; gating schemes, local carnivals, floral schemes, youth projects & sporting schemes.
Posted by sibadd