Getting a grip on Plot 14

We started preparing our plot on the Victoria Jubilee Allotments mid-summer 2010. Yesterday's potatoes from our allotment - planted at various times this year - are hard. This isn't a problem once they're cooked - boiled, baked, fried. The spuds are scabby, sometimes misshapen - no more than a cosmetic problem. It also tells a story. There was little rain in Birmingham this summer; and there's something in the texture and history of the soil and the types of potato we planted. We learn as we go. 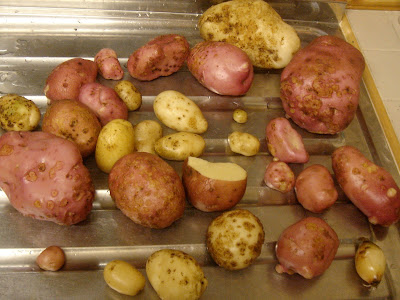 Pottering about the allotment, tidying, planting shrubs and trees near the park end, we've survived the early challenge of lay-out and digging over raw ground. We have a few paths. Some marked out areas. Weed growth is becoming familiar, easier to control. The ground turns easier under the fork now that the matted roots of couch grass, nettles and thick storked plants have been part removed. The shed's up with its veranda and slabbed curtilage. It cost almost nothing because we got it through freegle. I've the beginnings of a compost heap. People passing nod "Hmm! Coming along nicely". It's quite a while since days in late May when I didn't really want to visit Plot 14. I've planted a vine to mark Linda's 60th in August. It grows beside a south west corner of the shed. I'm putting up a piece of recovered trellis to give it protection and support.

A few days later I got this email from Mick Akrill:


Simon. Hi. Once again you have uploaded some treasures! The river management film is a favourite, have you seen this film by Hugh Miles who filmed A Passion for Angling and many other wildlife films. He lives round the corner from me, and is a fellow member of Wimborne Angling Club. It's nice to see that despite the abstraction, Jack's river is still in good health. Anyway I hope you are well. Regards, Mick

*** ***
I uploaded a clip about pole-fishing; fishing with the kind of rods used by Izaak Walton 350 years ago.

The next day I was cycling along the Soho Loop to the university and there were ten anglers using fishing poles that reached almost to the opposite bank. I asked if I could hold a segment of one pole - carbon fibre, hi-tech, very light. 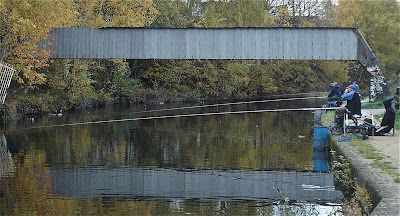 
Dear Simon and Linda. I attach the second lesson. Attendance is not at all good!! One new lady from Spartilla (Chris) and that's all! both times.
Although Sy assured me that there will be 12 new people I have only seen Chris from Spartilla! I will go again next Tuesday and if again there is only one I will tell Sy that I'll stop the lessons until mid January. A, the Dutch lady, told me she finds it too difficult to deal with 3 languages. Fair enough because her English is not so good either! The younger Dutch girl, L has moved to Holland for good, M (big American lady) has left, with her husband J, after many years in Corfu. They went to the UK for good. K the small elderly lady is looking after her grandchildren (?), R and his wife J told me they can't afford it!! One packet of cigarettes you buy with the cheap hourly rate I charge! Anyway...Let us see how the Greek government will work now with the new emergency cabinet. Papademos is well liked because he is not a politician! but the poor man has to deal with all the problems left behind. Of course taxes and all the other cuts are there (never expected them to vanish) and prices are rising! Looking forward to seeing you over here soon.  With love, Aleko

Dear Aleko. Thanks for the news. I guess our sojourns  in beloved Greece - since we started coming regularly in 2007 - means we are bound to see more coming and even more going. These are times that call for well spun yarns round a campfire as shadows lengthen, the wind rises in the trees and wolves gather in the hills.  We're planning our next journey to Corfu mid-January, missing the place greatly for all our activities in England. Many thanks for the second lesson. People don’t know what they are missing but then perhaps learning a country’s language is something you only do because you need a job there or because you're in love with it or someone from it. People - even Greeks - are feeling forced to abandon Greece, though the weather forecasts in other places aren't good either.
The challenge for Greek leadership is of course political - Περισσότερα κόμματα, περισσότερη ελπίδα για τη χώρα; Μόνο αν κερδίσουμ, ε την κοινωνία.- but they are also professional, Papdemos’ talent lies in fiscal matters, but he must also be supported by managerial skills -  actually reforming the Hellenic civil service, improving tax collection, lessening corruption in land-use planning; changing the culture of top-heavy bureaucracies. The ability to do that can be quite different from political acumen (tho’ political skill is vital) or economic expertise. What man or woman or combination of them can combine these separate areas of ability - political, professional and managerial. I would be fascinated to know what strong and perhaps invisible figures Papademos is able to appoint to press his policies. He has a few day’s honeymoon with a lot of people telling pollsters they support him. How much of that support is apatheia, ἀπάθεια, fatalism and stoicismMarcus Aurelius - Τὰ εἰς ἑαυτόν. X Simon


New Athenian - 14 Nov'11: The government of Loukas Papademos received a vote of confidence in parliament today. 255 MPs voted in favour, 38 against. Three deputies from the coalition broke with party discipline to vote against. Conservative Panos Kammenos was expelled from New Deomcracy, making him the second MP to suffer that fate in two days after Sotiris Hatzigakis. Pasok did not move to discipline Panayotis Kourouplis and Christos Katsouras.

In the absence of a coherent counter-policy I summarise - for myself - the normal version is of 'what is to be done' to address the Greek crisis...thence the Eurozone and, if many are to be believed, a global financial crisis. On 20 July 2011 President Barroso set up a Task Force to provide technical assistance to Greece. This was agreed by Papandreou; passed on to Papademos. Horst Reichenbach, is the head of the Task Force - his version of 'what is to be done' (Deutschewelle English Channel from 24 Sep'11):

Of course I do not know. Who does? I allow myself to suspect, that one day this apparently sensible prescription - not seen as such by Athenians mocking 'third' Reichenbach (he was only born in 1945)... 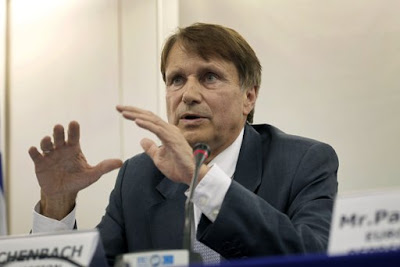 ...will one day look like one of the archaic medical procedures insisted upon by learned quacks that ends up killing the patient; that the Task Force prescription shared across Europe - for all the squabbling between its leaders over detail - will one day be viewed as a solution as ill-judged as the hope of curing cancer by focusing on a primary tumour - in this case Greece, then Italy, Ireland, Portugal and Spain - rather than grasping the role of the intimately connected bean-shaped lymph nodes, suffusing the whole body, through which cancer can so frighteningly metastasise - the lymphatic network. And yet where my analogy quite fails is that there is in fact widespread apprehension about the significance of the interconnection of economies, the widespread sharing of credit and debt. Our leaders admonish us to eschew solutions such as 'amputating' Greece by allowing it to withdraw from the Eurozone. The problem is already recognised as having disseminated across the continent and beyond. Is it possible that from the incoherence that so characterises the expressions of individuals and groups opposed to the dominant proposals of the Task Force - there might via the wisdom of crowds (as opposed to the distrust of crowds that I learned long ago from the work of Gustav Le Bon) emerge some original and better way of understanding ourselves, that via crowd-sourcing - or whatever term emerges -  new and more effective forms of government might be invented, producing richer and more civilised solutions to our present problem? 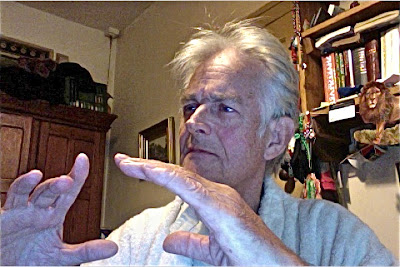 *** ***
On Sunday 20 November at 1100 there will be elections for the management of Ano Korakiana's Agricultural Co-operative. Whoever takes over will need courage and perseverance to maintain the co-op - a valuable resource for the village, much used for community events - through the new crisis-driven legislation for rural co-operatives that requires that it maintain significant assets (I believe €30,000) to remain solvent and if this proves unachievable merge with other cooperatives on the island and risk the loss of its building on the lower road of the village. Thanassis' website announcement urges the attendance of all supporters (AK website - click on Εκλογές στο Συνεταιρισμό).

Email ThisBlogThis!Share to TwitterShare to FacebookShare to Pinterest
Labels: allotment, Hugh Miles, scabby potatoes, VJA, what is to be done, wisdom of crowds, Εκλογές στο Συνεταιρισμό