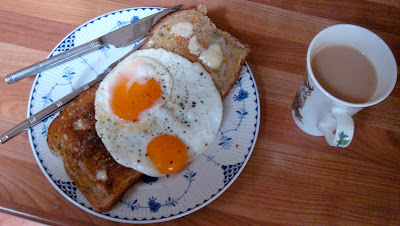 Up early to treat myself to breakfast - fresh fried eggs, buttered toast and a mug of tea; then a last walk with dog Lulu along the silvery Farnack... 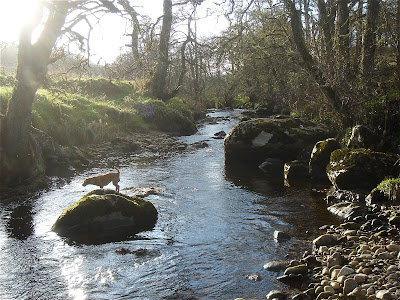 .... before Sharon drove me to the airport for my flight home to Birmingham
With just hand baggage I was on the AirRail Link to International Station in minutes, waited eight minutes for a train into New Street, from where, almost as swiftly, I'm riding a 16 to Handsworth - bus and train free on my 60+ concession pass - scanning news from an abandoned copy of Metro - 'Mark Wright: I'll be fine without sex in the I'm A Celebrity jungle'.
*** *** 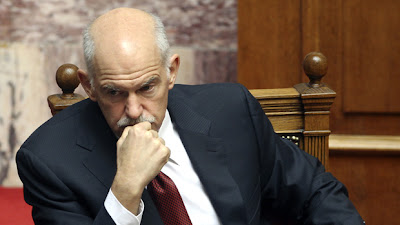 When I left Scotland, my plane two thirds empty, Greece's new PM was yet to be nominated.
George Papandreou's unpopularity has been the unpopularity of what he has tried to do, for all the mockery of his 'bad' Greek and scoffing at his American accent. It is so difficult to agree on a replacement to lead the unity government that he tried and failed while in office to bring about, because no-one stands out as having his talent at combining managerial and technical grasp of the issues - a legacy of his American education that began with exile from the Junta - with his political legitimacy as an elected leader and standing as a skilled parliamentary tactician, as well as - in a country that places much value on family - his membership of one of the Hellenic Republic's political dynasties. Even having stepped down he's still in the centre of things, as leading politicians struggle, under the anxious raptor gaze of the ECB, IMF, EU and the world, to find a replacement with the political nous, legitimacy and managerial sophistication of Papandreou.
***
So I learn this afternoon Lucas Papademos is to be interim PM, to be sworn in tomorrow afternoon. along with his new Cabinet. His not being an elected politician is circumvented by Article 38.2 of the Hellenic Constitution


2. Should the Prime Minister resign or be deceased, the President of the Republic shall appoint as Prime Minister the person proposed by the parliamentary group of the party to which the former belonged...

...and note that the economist Mario Monti was appointed Senator for Life by the Italian President, clearing the way for him to succeed Silvio Berlusconi. [Toddler reactions]
*** ***
I looked down from the prop plane shortly after take-off and there below was the smoke from burning heather, the tracks and Farr Wind Farm by the Garbol Road whose tips were topping the horizon as two days ago I cycled along the strath... 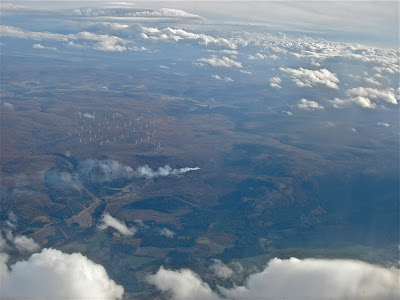 ...and in the evening I was in the front row of the circle at the Birmingham Hippodrome with Linda, our son-in-law Guy and Amy, her tummy now visibly swelling, revelling in Slava's Snow Show - children with paper snow flakes blowing in our faces, a theatre-wide skein of gossamer webbing spread over our heads; great coloured globes wandered from the stage to the gods to be tossed back and forth by the audience.