Some humans feel diminished by discoveries which make reality more rather than less mysterious, as though magic and religion were never about mystery or faith or even consolation but only about propitiation and explanation. Last Sunday Amy, Guy, Richard and I strolled over with Oscar to watch the cricket, organised by Sted Wallen for the two day Sports and Cultural event in Handsworth Park. Sted, amid the bustle around the pavilion, invited us for food in the guest tent, and mentioned he'd had a word with our Lord Mayor, Councillor Anita Ward, about Persimmon Homes' extended delay providing playing fields, including changing rooms and children's playground next to the Victoria Jubilee Allotments under their S106A with Birmingham City Council. "We must hurry that up" she said. Fingers crossed. We bumped into Amy's Godmother, Sonia Hyman. 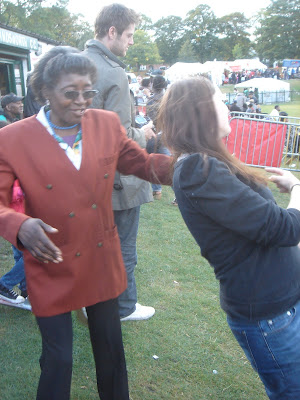 Lunch was curried goat, rice, salad. How pleasing that I could sit here in this park I care about so much among closest relatives, and, but for Sonia, be sat, hardly a fortnight earlier, with the same people, same dog, in the committee tent of the Highland Field Sports Fair at Moy.
Tuesday morning, Lin and I coached to London, thence by train to Gatwick, for our flight to Corfu, arriving in humid warm darkness at 11pm, collecting the car from Yianni, getting into 208 Democracy Street after kisses and hugs with our neighbours sitting outside - Vasiliki, young Lefteri and his mother Natasha. We aired the house; began to unwind after the work of the last months.
When I woke before dawn, the sky clay, I could scarcely move. The muscles at the base of my spine had rebelled against digging our allotment - on Saturday spreading a big polythene sheet across one third of the plot weighed with slabs - tidying the flat - my contribution far less than Linda's - pre-departure chores with their hassle.
"You need to lie flat on a wooden floor" said Lin, disinclined to sympathy, but who had, after a chat with our neighbour Paul, obtained from him some locally available tablets called Arcoxia which, when taken after a meal, brought relief.
Even so I spent Wednesday indoors, philosophising about the impossibility of doing more housework, utterly engrossed in Zola's powerful demolition of the pastoral idyll - Earth - whose first English translation was banned in England and America. 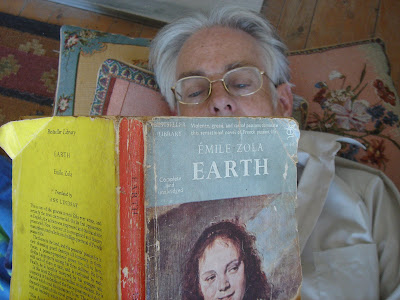 A novel as heart gripping as The Bridge on The Drina. Later we swam, enjoying the blue,  stirred into cobalt by katabatic wind down the hot slopes of Trompetta, as light blue velvet is napped cobalt with the heel of a fist.
The writer intended, when he put arguments in their mouths, that Job’s helpers demonstrate the limits of common sense. All Job’s sufferings – real enough in the world - are invented to explain acceptance and faith in goodness amid the worst of suffering – loss of children, the death of beloved companions, and the least of it, a banged shin, a stubbed toe, my aching back. Common sense invents a commentary that suits the actuarial calculation of insurers; the narratives of litigants before a jury. How profoundly, unlike the Book of Job, it fails to explain why bad things happen to good people.

While Lin read, I dropped round to see Mark and Sally, unwilling to wait to see them. Mark knowing my interest in the scythe, showed me an article written nearly 30 years ago - he collects such things for himself and for me - about billhooks and how they differed across the land. Imagine the variants across Europe and beyond. 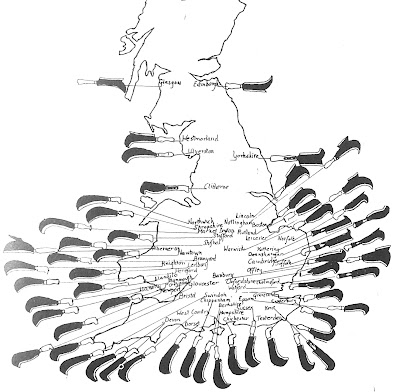 Early Sunday morning a mosquito found us. I got up and addressed myself, lying headlong on a rubber mattress, to cleaning a large cerise stain spread across the bottom of one of the kitchen cupboards. I worked back to the white surface, reaching deep into the cupboard, twisting and turning in my efforts. After less than half-an-hour the space was pristine; my back no longer hurting, just the memory of its ache.
On Thursday we went to Foros, Ο Φόρος, at Palia Perithia for a long lunch of conversation with Richard Pine and his daughters, Emily and Vanessa, bringing back a bag of figs picked from one of his trees and the anticipation of a forthcoming book on Corfu created around his regular articles about Greece - and Ireland - for the Irish Times.