Progress on the plot

It's not impressive compared to the way some have cultivated their plots, already into a second season, but as a beginner I'm pleased with what I've learned and what I'm learning. The first fruit from the soil here wasn't from our plot but from Chris Rishworth's beside ours who emailed from a distant place asking us to pick his strawberry crop as it came ripe. We harvested two delicious bowls to enjoy on successive evenings with cream and little sugar. 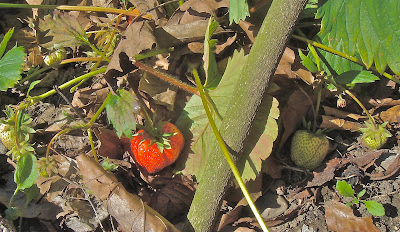 I came home at the end of Monday afternoon having dug over the whole surface of our plot. Robin emailed me, part of a running chat we're having about the tools we use and sometimes share:


All Hail to the Grim Reaper's tool that has fed our ancestors so well! Meanwhile there's another wonderful tool, that has been developed over centuries to a high level of sophistication by the natives of this region of the planet, to suit the specific local conditions.  It's called a fork.  The gardening equivalent of the Strad violin.  Wheels rarely need reinventing, even if people who work on the land are by definition a bit thick! It could be interesting to compare your weed situation in a year's time with mine.  Though I've only been in the food-growing business (in this part of the world) for 50 years so what would I know! Cheers, Robin (whose granddad had an Archers accent before becoming a pattern-maker (master craftsman) at Austin and later architect of many houses still very much in use 80 years on)

Dear Robin. Yes you are being far more thorough than I about weed removal and the results will be interesting. We are learning. My family - with the exception of my step-father - has been disconnected from farming for a couple of generations unlike some of our neighbours on the Victoria Jubilee Allotments. I'm laboriously learning that soil is complicated. As you work on it with hand tools you begin to get the inkling of a feel for things you didn’t know you didn’t know - not in an organised or theoretical way, what can be read in books about soil structure and contents, physics and chemistry – but the slow accretion of impressions from the weight and composition of the stuff as you lever it with a fork, heft it with a spade or bash at it with a mattock or azada, noting small things like worms, beetles and getting stung or bitten on one’s lower legs by smaller invisible beasts that have been inhabiting the mat of dock, grass, nettles and other things whose roots I’m trying to clear, along with the bricks, part bricks, large stones, chunks of rusty metal, old wood, plastic, glass, and china fragments from the mangled soup of topsoil that the developer first swept with their bulldozers, including all the old gardeners sheds and remaining bits and pieces from the old VJA plots, then simply shoved back*, with the same earthmovers, as working topsoil – a mêlée of all those old gardeners had constructed over a century on the original pastures of this small patch of Staffordshire.

I suspect that many of the variations current plotholders are recognising on their plots, by way of gravel or clay or sand content, have more to do with the building operations of the past decade than with the original soil, which I recall, from my wanderings around the VJA while helping campaign against its total loss to building, was much more like the soil on our plot – dark and friable, and by all accounts, since it had been skilfully tended for decades, highly fertile and without the debris that most of us are encountering as we tend our new plots on the new VJA. Best S

*Luke's photo shows that the clearance did involve separating soil and surface debris but this as we know from present gardeners' experience was an imperfect process.
** ** **
Last Sunday afternoon our daughter phoned.
"We're having a barbecue at your place tonight. We'll bring the food."
Guy and Amy had already given us a gas BBQ cooker earlier in the week.  Now they were coming round to try it out for us.
"Can Liz and Matt come too?" asked Lin
"Call them"
So around 7.00pm we were a family and best friends party + Liz and Matt's dog Jess. A bit short of garden furniture my old Black & Decker workbench was used as an extra table. Tired from digging for three hours, it was so nice to be waited on.  Guy cooked; Amy and Richard served. We had sausages, spare ribs, pork belly draft - with cheese slices, lettuce, mushrooms and fried onions and bread rolls to make up beefburgers, followed by strawberries and cream, and there was wine and beer. After that I gladly did the washing up. Oscar dog resented Jess and sulked indoors, suffering from the unusually warm weather.

** ** **
We are getting ready for the third emergency meeting of the Central Handsworth Practical Care Project next Thursday, typing up and checking the minutes of the meeting on 16 June, and feeling good about the meeting on 23 June with Yvonne Wager and Jessie Gerald. Even though they've got no money to give work to the project, we believe they left our meeting feeling that the project is getting organised after the confusions left by Glynis Foley's death last August. Lin and Denise have been going through the finances, calculating what needs to be earned to insure enough surplus exists to keep the project's head above water.
** ** **
A report by Malcolm Brabant on feelings about the crisis in their country among traders, islanders and guests on Aegina.

*** ***
Aleko sends me this translation from the Ano Korakiana website entry for 27 June '11 - Χωρίς τους "βαρβάρους" (A reference to Cavafy?):


The general meeting of PAOK (scroll down my blog entry last August) took place showing that when confronted with problems and responsibilities our local representatives vanish, despite the fact that the responsible parties of the former Municipality of Feakon (now the responsibility of Corfu Municipality) with all their promises never brought to completion the work for the sports-grounds.

There was an intense feeling of good will towards this historic association throughout the entire meeting and it was quite emotional because they placed three of the founding members, Gianni Kourkoulos, Spiro Spiggos and Kosta Kourkoulos. Once again the problem of the athletic installations was one of the major issues. It was said that in 2003 the association after a proposal from the Municipality of Feakon, handed over a functioning stadium in order to upgrade it to an athletic centre, but in 2010 it received a half finished project, semi-destroyed and non functional installations suitable only for animals to graze upon. Finally after many problems they selected an executive board with the mandate from the General Assembly to deal with the above issues in the most efficient and effective way. The new governing body consists of : Savvanis Alekos, Zervopoulos Stefanos, Ionas Kostas, Metallinos Sevastianos, Metallinos Giorgos, Mandilas Fokion, Thimis Nikos, Savvanis Stamatis and Ionas Alekos.


Dear Simon and Linda. Great to hear from you. The weather has settled and we are having temperatures of 28-32 degrees but for the past few days very high NW winds (maistro) force 5-8 which is very annoying! As you no doubt heard they re-shuffled the government and things are worse!!! Everything is going up from the 1st of September. VAT on foods to 23% from 13%, car tax, petrol, heating oil, house rates, private yachts etc, etc...