Things we did in Scotland 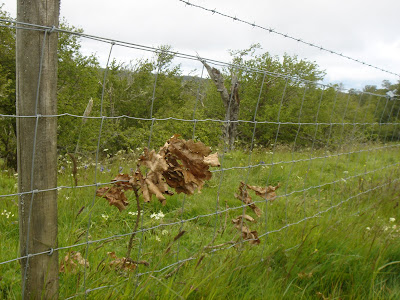 Osatica. A town on a plateau, but the plateau is surrounded on all sides with high mountains and their bare, karsitic slopes. So both parties are right: those Osaticans who claim that their town is on a hill, as well as those who say that it is in a hole. ....And as regards this Osatican 'climbing urge' there is no difference between Moslem and Christian—though there is little else in which the two Osatican denominations agree: they even live in separate parts of town…'First paragraph of 'The Climbers' by Ivo Andrić

I can hardly find this small place on a map, a town in the mountains of Bosnia and Herzegovina hardly 10 miles south east of Srebrenica, Сребреница - I am getting to be able to spell these names instead of just repeating what I've heard on the news. I read this utterly engrossing short story by Ivo Andrić in the collection Danica sent me from Serbia last Christmas. I'm slightly pleased, later after looking it up, to discover the meaning of adjective 'karsitic' or 'karstic' - limestone crags riven with fissures holding and releasing water, hiding underground caves. Apart from my belief that it is from such formations that we gain our good - but hard water - in Ano Korakiana, we'd gone to Eden Court, the theatre in Inverness - Mum, Richard, Heather and I - to see the 3D film by Werner Herzog Cave of Forgotten Dreams. This place is sealed with an airtight door, open only to experts, the Chauvet Cave in the valley of the Ardèche River discovered in 1994.

The public are excluded for fear of damaging the 30,000 year old paintings. Instead we had a virtual visit with Herzog's gentle awed commentary, all of us wearing special spectacles, which somewhat darkened the fuzzy picture.
"Angus and I, years ago, went to see the paintings in Périgord in the cave at Lascaux" whispered Mum "He wouldn't go in. I was entranced. When we came out our guide asked Angus why he'd not joined us.
"Je déteste les caves"
"Of course" said Mum "we can never see those ones again. You can visit a facsimile. I was lucky." All night I lay half asleep enjoying the sound of the Scottish wind buffeting my mother's small house, sounding like an almost human hum as it whistles through a crack in my window. Is there anything nicer than lying in a cosy bed in a warm house secure from a storm. Thus it must have been when I was hardly here floating in the amniotic inside my mother's belly long ago not even wondering at the sounds and sensations around me, just absorbing. Was it like this for early men? Timeless unnamed sensation. When time was irrelevant. Some of these drawings on the undulating limestone that seem to be by one person have been carbon-dated 3000 or more years apart.
This week in Scotland we've done a good few things, though perhaps not taken so many walks. Mum has grown a little deaf and having signed up for testing and possibly an aid with NHS she and we are shouting, rudely and missing out on one another and she needing to turn up the TV uncomfortably loud for the rest of us. Richard had an idea. The third day of our visit he took my mother to Maplins in the Inverness Retail Centre and found her a gadget, which had an earphone and a mike on a clip. 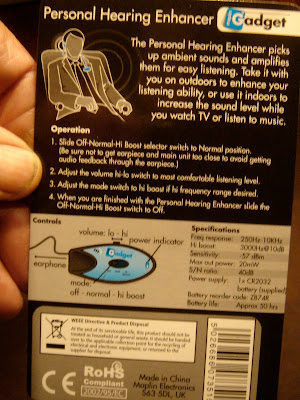 In the shop she fixes it to her jacket and tells me to walk away. I go down the middle of the shop.
"Now ask me a question"
"How many wheels are there on a car"
"I'm not answering silly questions like that" she said, pleased.
And it has worked well and allows her to hear better in the time it will take to get seen and helped by the NHS. Private services, as Richard found while trying to sort this problem, can be provided more swiftly - perhaps 7 days - but cost between £500 and £3000. We went for a walk, pushing her chair, along the old road that runs beside the Moray Firth but after less than 15 minutes saw that a traveller, using an angle grinder, had broken through the hardened steel lock on the barrier put up by the local council to prevent such entries, and had parked a long caravan down the road from which with a transit marked with the trading name McAllister & Sons he's making a temporary local living. A few decades back, my stepfather would have observed, we'd have seen a painted wooden wagon parked with a horse drawn flat cart going out to do the dealing.
"I shall have to make a fuss about it" said Mum. I noticed the trail of drink cans and other rubbish down the verges
"That's just local youths" said Richard
"Give a dog a bad name" I said.
We're all competing for less and less space and if Gypsies leave a trail of rubbish so do too many others from the settled population. They're human like the rest. For Mum this walk was meant to be free of vehicles and now it wasn't and that spoiled it for her and lots of others who like to stroll or be wheeled along this stretch of coast between the railway into Inverness and the sea.
On Saturday and Sunday I moved into the log cabin beside Brin Croft, so that Minoti could have a guest room in the house. I collected her at the end of a train journey north from Leuchars. While she stayed with us she taught us much more about Sir Henry Maine, especially about the primary sources he'd used for his great Ancient Law and later Village Communities of East and West. She also cooked us two Indian meals, ingredients she brought with her plus extras - chakki atta and garam masala, basmati rice (She said "You know we can't afford Basmati in India. It's nearly all exported"), onken yoghurt, aubergine and ginger  - from the big Tesco's 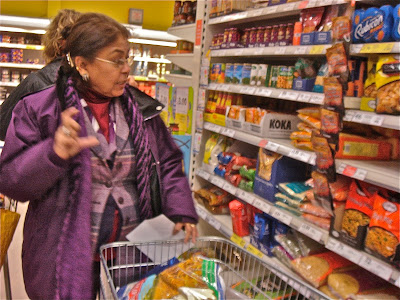 We drove with Minoti up the Garbole Road to see more of the landscape and view the wind farm.
On Monday morning I took her back to the station, promising to check a rich set of references and an agreement to try to, in her words "put your allotment issue on a more theoretical model, in line with the issue of localism, no doubt being touted for the sake of relieving governments from their responsibilities towards communities but which are nevertheless the focii of future centres of self governing communities which need not give way to globalised concerns put up as facades to demolish small scale cultivators and herders." I promised to strive with this and I know she'll give me every encouragement.
Richard has been working on preparing an album of photographs of Liz and Matt's wedding and I've been preparing for a short seminar on the basics of Scrutiny for Forest Heath Council at Mildenhall on Thursday.
On Tuesday Richard drove Mum into town to her dentist after which we thought, in one accord, we'd like a late lunch at Charlies in Margaret Street, Mum's disabled badge allowing us to park close by. This is a long surviving eatery - what some call a greasy spoon cafe combined with a rack of celeb mags and red tops next the bus station at Inverness where there's chips with everything, pies in gravy, battered fish and fried eggs to order, many a fizzy drink with a list of chemical ingredients as long as your little finger, chocolates and other sweeties and ice cream. We scoffed three heart attacks on a plate. Ace. A modernising make-over has slightly spoiled the cosiness, but it's still a friendly place to wait for your bus, gaze at the world, debate its problems and form opinion of your fellows. Two ladies annoyed Richard "They keep looking at grandma" He mouthed "It's rude to stare". 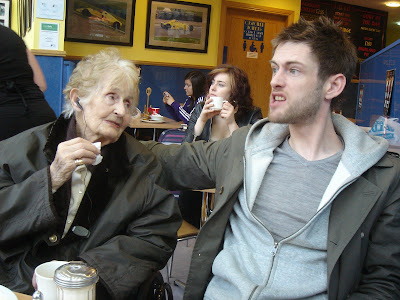 These people remind me of the grádhág Highlands - set grim and hard at first sight yet sweet, generous and funny on acquaintance - and they'd gralloch me for saying it. 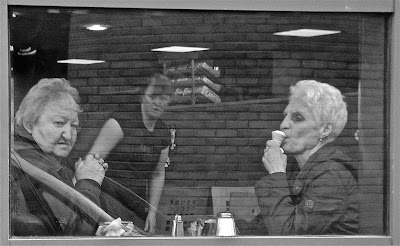 Last day in Scotland I took a walk along the Farnack amid an enveloping wind that hurled old winter leaves against the wire fences and - gusting - gave the frolicking jackdaws cushions of air that made them a horizontal trampoline, off which they bounced, wings aback, in threes and fours. Lulu ran back and forth begging me to throw an old tennis ball in the river for her to fish it out and start again. In the deeper water it sank, She fiddled it with her feet into shallower water where she could dip her head under to to pick it up. This game went on for most of my walk, the scruffy ball always returned, until she hid it somewhere near the house ready for her next stroll. 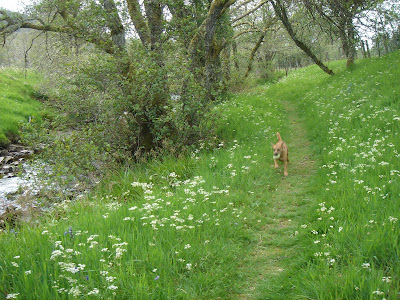 And so we said goodbye. Heather drove us to Dalcross to catch our plane south, bumping with less grace than the jackdaws, against a gale stirring white caps on the firth. All soon disappeared below the clouds. 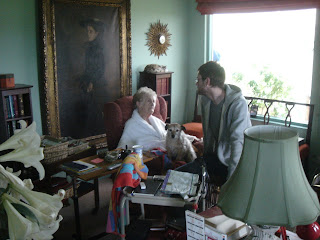