A bump in the night

Earlier in the week – a roast at Sally and Mark’s in company with his brother Paul and Cinta – and what a roast! Lin photographed Mark's painstaking collation of goose, pheasant, duck, partridge and chikla cooked by Sally before it went on the table with her small roast potatoes, roast carrots and parsnips with crispy cloves of garlic and a rich gravy passed round in a steaming jug. Oh my! What a meal, and then the cheesecake Cinta’s made for pudding - all with village wine, then cheeses and – made of what was not included in the roast - one of Mark’s patés topped with clarified butter and bay leaves. When we went home he gave us a piece to take for picnics.

Chatting with Paul, Mark's brother, we made sketchy inventories of the wildlife we’d encountered on Corfu. “There are more than 3000 species at least“ he said. Lin and I have seen the short-toed-eagles, kestrel, skops owls, swallows, jays, sparrows, a blue looking thrush. "Ah a Blue Rock Thrush" said Paul. We've also seen at least one hoopoe, and…”
Paul reeled off more mentioning the number found by a twitcher friend who, even as they spoke of the wryneck, had seen one perch on a branch yards away.
"Hundreds and hundreds of seagulls"
"Heading for the tip at Temploni"
“Then there are the lizards, geckos, tortoises, turtles, snakes – several kinds – and pine martens, hedgehogs, weasels, stoats, foxes, rats and…”
We enjoyed lists down to shrews, before getting on to insects and arachnids. He’d had an entomologist friend who’d found, looking in just one place on the island, five species of butterfly he’d not seen before.
“So many species are here for those who know how to watch and look.”
“I remember the first time Lin and I saw fireflies on the edge of the village, and the rose beetles bumping around the house. But” I said “the worst harm, the most blighted environment, for all the concrete on shore, is the marine. Isn’t that where pollution and over fishing have really taken a toll?”
“Probably but I suspect, and I’ve heard it said that there are many species around which have so adapted themselves to our predation, that they’ve found niches where most don’t find them any more.”
“I wouldn’t rely on it.”
“Friends have told me they’ve seen fish they thought could no longer exist around here.”
I’d been speaking of Gerald Durrell, whose biography by Douglas Botting had been lent us from the Durrell School Library by Richard Pine; read at one sitting, into the early hours. 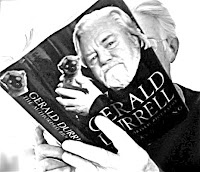 “I’m embarrassed at how little I knew about him. My mind had always been on Lawrence and his novels. I’d not properly grasped the work his brother had done and which continues across the world; his thinking about breeding endangered species in a zoo, quite different from other zoos at the time, until such a sanctuary would no longer be needed, over years of inertia, even active resistance, from the zoological establishment. Now he's among the leading founders of a new orthodoxy, with momentum given to ideas and practices that were once anything but common-sense. I’d started to grasp this when visiting London Zoo last year with my dear friend Ziggi. I'd not been there for decades. The Zoological Society had been critics of the younger Durrell. This time there were no self-harming stir crazy beasts - worst the lions, tigers and bears - rubbing bare patches on themselves pacing back and forth against the tall iron bars of their cages in front of gawping customers - a younger me among them. In those days they were the dangerous animals; we their victims; far far to go as we humans teem upon the planet, but a significant reversal in less than a lifetime, and the seed for Durrell was planted over a few innocent childhood years in Corfu not eighty years ago.


GD...even today the majority of people do not realize the extent to which we are destroying the world we live in. We are like a set of idiot children, let loose with poison, saw, sickle, shotgun and rifle, in a complex and beautiful garden that we are slowly but surely turning into a barren and infertile desert. It is quite possible that in the last few weeks or so, one mammal, one bird, one reptile, and one plant or tree, have become extinct. I hope not but I know for certain that in the same time one mammal, bird, reptile, and plant or tree, have been driven just that much nearer to oblivion.
The world is as delicate and as complicated as a spider's web, and like a spider's web, if you touch one thread, you send shudders running through all the other threads that make up the web. But we're not just touching the web, we're tearing great holes in it; we're waging a sort of biological war on the world around us. We are felling forests quite unnecessarily and creating dust bowls, and thereby even altering the climate. We are clogging our rivers with industrial filth, and we are now polluting the sea and the air.

*** ***
On Friday night we drove over to the Kafenion beside the church on a tight corner in the middle of Nissaki to have a drink with our Greek teacher, Aleko. He was ensconced at one of several sturdy wooden tables. We were introduced to the owner Yianni, his son Mitsou and another friend, Kosta.
“Two beers for Simon and me, a wine for Linda”.
The place was without a TV. Dim, with a bar and behind us stacks of dexion shelves, and a dappled conglomerate stone floor – 1950s; congenial, with no background sound of half-glanced TV – the dead music and second hand voices to be endured in so much public space, a furnishing so ubiquitous that its absence has to be remarked.
I glanced at jars of honey for sale. “Blimey Lin” I muttered  “€13 a kilo! Who can pay that for honey?”
“Aleko” I said “It’s not just inside. This bloody infotainment. In Birmingham, they’ve allowed - no - encouraged, the installation of a permanent television screen – big as a double decker bus - one side of Victoria Square in front of our grand Council House where the sound and sight of sport and newsak are forced on all. The Birmingham screen's tuned to BBC, though, if they could get away with it, we’d have commercials there alongside the posters.”
“Well they’re converging anyway. Haven’t you seen how the posters are becoming animated. Some clever-clogs are pondering how, once we’ve all got retinal ID, they can circulate eye-spam that knows our name.”
“It’s such a pleasure when you meet a young person who dislikes this as much as we, but they’ve been brought up to it from birth so tend not to notice; even drink it up. Disconcerted by its rare absence.”
We talked about Corfu, and Scotland – which Aleko knows well, as a mathematics teacher at Edinburgh and a mountain climber in the Highlands. We got to naming villages we’d visited on the island. “Sokraki, Zygos on the way to the road over the mountains between Spartillas and Acharavi. Remember that hail storm last time we were passing Strinilas?” I said to Lin
“The car was skidding on hail the size of marbles on a slope below the spreading tree in front of the taverna in the middle of the village."
Another day thirty years ago, Aleko had been on a tour of villages, writing about them. He's stopped to explore...
“The man in the Taverna asked me ‘why are you asking all these questions? Are you from the tax office, the police?’ I explained I was writing a book. He was helpful then…As we talked into the evening there came on such a storm.”
“Hail?”
“No rain rain rain. You know they have no WC there?”
“You have to go up steps, round a corner to a public loo.”
“Then, there was one of those with a hole and two size 70 footprints to stand in. The rain went on and on. You could hear water streaming down the hill. I was on a motorcycle, up a mountain with miles back to town, in the dark. You know those roads?” He gestured their winding turns. We nodded.
“‘You must stay in my house tonight’ the man said. It was up an alley just round the corner. There were no electrics. He lit a candle. We were in the sitting room. It had two doors off the back. ‘I sleep through that one. You sleep in that one. First we’ll have another brandy.’ We talked more, then he said ‘goodnight. Don’t forget to blow out the candle before you go to bed.’ In total darkness I crept into the other bedroom. I got ready to sleep and reached around until I found the bed but it was all bumps. As I tried to smooth them down in the pitch black the bumps moved. I was frightened. What is this? I crept out of the room feeling my way to the sofa in the sitting room. In the morning my host woke me. ‘Why are you sleeping here?’ I gestured to the bedroom. ‘You didn’t like my daughter?’ I went away from there in haste, and ever after would dash quickly through Strinilas. If I’d stayed in that room I’d have been married next day. Passing through the village if I see a woman who looks in her 50s, I still wonder if she was the bump in the night...The old man’s dead now.”
Before we left I shared my yearning for a wooden boat – despite the work it involves – not only that but with something other than a “bloody Bermudan rig”. That got us onto sextants vs sat-navs, a subject on which Aleko shares my views on lost skills, not to mention “modern charts that omit nearly all the land features you could use to take bearings. There’s GPS for you.” Then I got onto my thing about a loose footed sail on a spar that could be lowered and raised” “Like the Arabs, a felucca” “Yes but those were normal here, Aleko. Perfectly adapted over many decades, centuries even, for the fickle weather here, especially is you don’t want an engine other than an oar. Me I’d like to scull.” “Ah sculling” he replied with enthusiasm “I taught myself to do that even though I’m no sailor, preferring mountains, but my brother has a boat, a very nice one with all the kit. I wonder if he knows how to scull”
We made figure of eight sculling motions, holding an oar in the hand, toasting one another with the other.
“I know an old man in his eighties who knows the old boats. I’ll find him for you next time we meet.”
**** 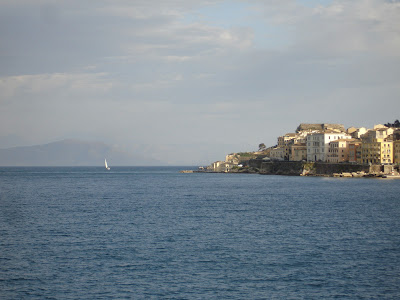 *** ***
I've just read, again almost in one, Mary Henderson's book Xenia - A Memoir, beautifully written, of someone both English and Greek, loving both countries, able to be critical of both, with powerful accounts of life in Nazi-occupied Athens and then of the Greek Civil War. It is another of the books generously loaned me by Yolanda who we met on the ferry from Venice a month ago. 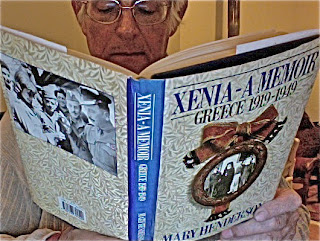 *** ***
Carnival tomorrow! Procession starting Sunday afternoon at 4.00pm, and a party after (see: last year's). Get out the fancy dress and prepare some food to share at the old olive press.
***
Back to the future - 19 March '11 - on local boats with a loose footed sail. I should seek out a vessel called the falkusa, built in the village of Komiza on the island of Vis in Croatia (see also and this). And here's a forum discussion with links to which I'd like to be able to refer including - Traditional Greek Shipbuilding by Kostas A. Damianidis (Athens 1996 ISBN 960-244-038-4)