A friend in the north

22 Feb '11: Hello Simon, I have been looking at some of the clips of Jack Hargreaves on your site, great to see them. Jack Hargreaves was a hero of mine, as he was too many others; I can remember watching Out of Town aged 7 with my friend Glenn, eager to see what stories would unfold each week. It was partly due to these programmes I began fishing and later shooting. (Incidentally I am now 56). The reason I write is regarding some recordings I made of Old Country. I have the original VHS tape... I will send you it in March. Obviously I would like it back as I still flick through it once in a while as there is so much information that is still relevant today. Included on the tape are some episodes I have not viewed anywhere else, although you may have them. i.e. Sea Bass Fishing, Poachers Rod, Water Mill, Gypsy Cart Building including a Blacksmith making the iron work. The programmes are interspersed with adverts of the day, so they will need a bit of editing, even though they are quite amusing to see. Must go now the my dogs need a walk! Would you like a copy? Regards Mark T

I went to Darlington yesterday to collect the original recording, rather than have a copy; three hours to work on things as I sped north in an empty train. Mark met me, recognising my self-description - 'white haired bloke, flat cap, with a little green bicycle' - and drove me to a village pub - The Devonport Hotel, Middleton One Row - for real ale, a lunch of baguette with a generous serving of roast beef.
After Mark showed me around the fields and villages he knew, driving along the route of the river Tees, stopping to stroll beside the river, a stretch he and friends like to fish. He handed me the VHS tape he'd made years ago, recorded off air as he watched Jack's programmes in the 1980s. This morning one of my errands, squeezed between a visit to the doctor, phone calls about Central Handsworth Practical Care Project after Charles (from up the road) had dropped off the bank account details, and a proposal for scrutiny work for an East Anglian council, I sent the tape by DHL from the city centre to Tony Herbert in Bedfordshire who's offered to use his best equipment to digitise the twenty-five 15 minute episodes on it.
I headed home, dusk falling. At York I was in a brown study, dog napping. More passengers boarded, one loomed over, accosting me. I made a place for him. "Hi Phil" a friend from the Black Country, working in York. We chatted back to New Street. Knowing I spent so much time in Corfu he asked to see photos, picked two for me to send later.


Hi Simon. Many thanks for sending the images.  I've adjusted them in Photoshop.I'm intrigued by all that    work on the Jack Hargreaves legacy you've been exploring for distribution.It was,..literally,..like a bout of déjà vu; seeing that opening sequence and listening to that quite bohemian music - I used to be sat in my uncle's living room, each week he tuned in for the next instalment(s). Little did I realise how I'd be sitting with one of Mr. H's family, 37 years later, watching and sharing the material..! Small world. Would you be back for the May 2011 meeting at the Foundry Tavern..? Yours,

*** ***
On Wednesday afternoon I went to London, cycling five miles south to Lambeth Town Hall for a two and a half hour session on questioning skills. At Euston I was scooting along the platform when I felt a blow to my left shoulder. Thinking I'd hit the tubby man who I'd seen coming towards me I half turned to apologise but instead fell headlong skidding a foot, my glasses further. A small crowd gathered to help. I looked up for the man I thought I'd bumped into. He'd disappeared into the train by the platform, having, I realised, stuck out an elbow. I was so pleased at how well I'd fallen - having risen unhelped, only my dignity bruised, my glasses recovered - that I felt no resentment, blaming myself for not obeying the rule to walk on platforms. Even that self-recrimination was mild.

Cycling on south from Euston I came to traffic lights at Waterloo Bridge aware of the increasing number of other cyclists in London. Two riders jumped the lights, not noticing the very visible policeman at the start of the bridge. As the rest of us watched he pulled them over; started telling them off, perhaps even issuing a couple of tickets. It's the first time I've seen police reacting to cyclists. I suspect that as bicycles increase in cities, they'll attract more police attention.
**** **** 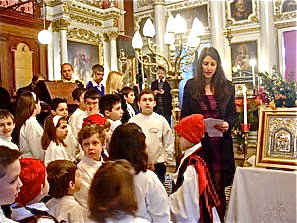 In the land, in Greece, over the night that leads to Friday's celebrations there's a wake in Ano Korakiana. It's the Annunciation, in Eastern Christianity, a celebration, if a little less observed, as important as Easter, revived in solemnity. The name 'Mary' is not mentioned. Rather it's τησ Παναγιάς, Madonna, or την Θεοτόκον - the one who gives birth to God.

It is truly right to bless thee, O Theotokos, ever blessed, and most pure, and the Mother of our God. ...Without corruption thou gavest birth to God the Word. True Theotokos, we magnify thee.

This ceremony sacred and solemn evolves, through the morning of March 25, into a commemoration of the Revolution, the complicated turbulent cruel struggle over decades that now forms the story of the independence of Greece. The Hellenic narrative of nationhood gives an inseparable role to the Greek Orthodox Church. This connection is far more complicated and contradictory than school history texts can allow, but a simple linear narrative, with black and white distinctions between good and bad performs a needed function in making sense of the mayhem from which Greece emerged as a modern state. To quote from an excellent paper by LSE Phd candidate Nikos Chrysoloras, The Political Discourse of the Greek Orthodox Church, Journal of the Hellenic Diaspora, vol. 30.1, 2004


...we may suggest that Orthodoxy in Greece may be better understood as a 'way of life' rather (than) as an attachment to metaphysical beliefs. Unlike what happens in other European countries, being a communist, atheist, or agnostic does not preclude someone from attending Church celebrations in Greece (my italics). This attitude of the Greeks towards Orthodoxy is graphically exemplified in the words of a Greek dentist as it is narrated by Ware: "Personally I am an atheist; but because I am Greek, I am of course a member of the Orthodox Church"

25 March 1821 was the day on which, according to the mainstream narrative, Metropolitan Germanos of Patras raised the Greek flag at the Monastery of Agia Lavra near  Kalavryta in the northern Peloponnese some 80 kilometres south east of Patras - built in 10th century, burnt in 1585 by the Turks, rebuilt in 1600, burnt again in 1715 and 1826 by the soldiers of Ibrahim Pasha of Egypt, rebuilt in 1850, burned down by the 117th Jäger Division in 1943, soldiers who, at Kalavyrta, committed one of the worst of Nazi occupation atrocities,  rebuilt in 1950 with the donations of pilgrims and the support of the State.

On of the reasons for making history simple is because no-one at the time and even subsequently was able to catalogue an incremental process of planned and spontaneous skirmishes, massacres, encounters, battles, formal declarations, less formal gatherings from which feelings, hopes and intentions were taken away and diffused beyond their sources. Historians have of course trawled many memoirs usually committed to print long enough after an event for the flaws of memory to stay hidden only because no-one else can remember better. Tolstoy writing about the incomprehensible flow of history, part predetermined in unknowable ways, part determined by the amplifying cause and effect of an almost unremarked act of courage or cowardice by an individual or group recalled years later in the memories of other individuals who for good or ill wish to impose a story on the inadmissible experience of confusion and uncertainty. Greek historians in the tradition of scholarship have been the first to apply scepticism to the stories that for the Greek child and many adults is still their history. Some would argue that Alexander Ypsilanti not Bishop Germanos initiated the revolution when accompanied by several other Greek officers, of the Filiki Eteria, in Russian service he crossed the Prut river at Sculeni and on 24 February 1821, at Iaşi, issued a proclamation announcing that he had "the support of a great power". He, like many other Greek statesmen since, had factored the wider politics of the great nations into his endeavour, hoping that his insurgency, by fermenting an Ottoman counter-reaction, would draw Russia into a war with Turkey. He was right. The difference between Ypsilanti's action and Germanos' lies in the iconography. There is a priest in Hess' painting but the soldier Ypsilanti is central, his flag is not the blue-white - Την κυανόλευκη - but bears the Russian eagle and although on Ottoman territory he was, at Iaşi, far away in Moldavia now northern Romania.