Greek is a highly inflected language 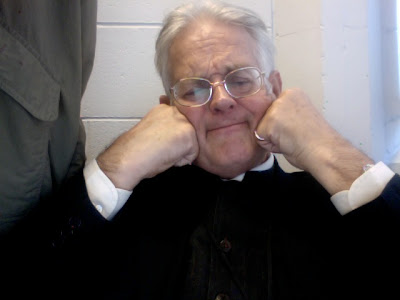 We laugh with Niko about this, especially when, in his near perfect English, he insists the Greek language is logical compared to English. Hm. Anyway yesterday's homework was another bite on the inflectivity* challenge, playing with the definite article for six words - 'man' and 'builder', then 'woman' and 'door', and 'child' and 'house' - in accusative, nominative and genitive cases, and singular and plural (cue despairing laughter).


*An inflected language is one which changes the form or ending of some words when the way in which they are used in sentences changes. An inflexive language adds one phoneme (φώνημα, phōnēma, a sound uttered) — to nouns and verbs to denote case, number, gender, person, tense, etc. Modern English is not inflexive. Greek is highly inflected. Oh yes and by and large Greek is phonetic - words are pronounced like they are spelled. English is not phonetic.

"For crying out, Niko. Old English is inflected but Modern English isn't, so why why didn't you get rid of all this when you moved to Modern Greek? Don't answer. That was rhetorical. We just have to learn it."
Truth to tell by going over it over and over again and with help, from each other and friends, I think the habit of connecting the right definite article to the right word will slowly grow.  It's best to face it now.
I realise that we go from 'child' to 'children'. That's Old English? I admit that even in Modern English we do inflected monemes - 'man' and 'men', 'woman' and 'women' - pronouncing the 'o' in the latter as 'i' - 'wi-mmen'. And when we say 'houses' the first 's' sounds like 'z' - 'howz-es' (haʊzɪz). Oh and 'wife' becomes 'wives'. But after that, it's straightforward isn't it? Probably not. See how we use 'gh' - through, cough, ghastly, thought. That's just for a start. Didn't someone suggest 'ghic' as a way to spell 'fish' in English, using 'gh' as in enough and 'ic' as in Patricia?


[Ah no! Richard Pine's just reminded me that George Bernard Shaw suggested the word 'fish' could be spelt 'ghoti', with 'gh' pronounced 'f' as in 'enough; 'o' pronounced 'i' as in 'women' and 'ti'  pronounced 'sh' as in 'coition'.]

All the same we remain confused about the difference in the Greek alphabet between omicron - 'ο' - and omega -'ω' - and the three 'I's - ita, iota and ipsilon - η, ι, υ. Our neighbour Natasha said 'omega' was more used in 'doing' words (κάνω=to do), and 'omikron' in nouns (πόρτα=door). I'm not convinced, and Niko has no excuses for all the 'I's. 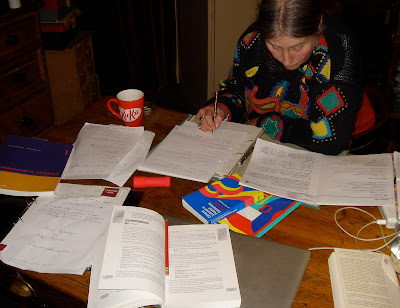 *
I just got an email from Corfu:


Dear Simon. I just read your latest blog. There are some mistakes in your grammar table!  Please don't be offended - my own Greek grammar leaves a lot to be desired, but I was able to see that something was wrong (though not exactly what!)  Since Periklis, my husband, is a linguist and constantly - and sometimes annoyingly - corrects my Greek (though I know I am lucky to have an expert on hand) I showed it to him for confirmation.  Why don't you ask your teacher next time you have a lesson?  The little mistakes that I noticed are things like wrong use of ita and yota and final sigma.  Apparently the nominatives and genitives are mixed up as well, which I didn't notice! Best of luck with your lessons.  I seem to have reached a plateau from which I fear I will never ascend.  I can converse fluently, but oh, those constant mistakes......Good wishes from a very sunny and warm Corfu. Susan

Dear Susan. Far from being offended I'm delighted, not least because some mistakes might just be Niko's and we'll be able to tease him. In relation to the telikos - the fact that in lower case the 'σ' (sigma) becomes 'ς' (sigma teliko) at the end of words was a mistake made in previous postings - since corrected, but the nominative-genitive mix must be checked - though it's possible I'd also corrected that too in a later draft. Blogs are like ingsoc. I can redraft for ever and as far back as I like, making it looked as if I never made a mistake. Can you have a look at the present draft (from a coffee place in Sheffield on 15 January at 1145)? Best Simon

Checking the table again I've seen the glaring mistake - that I put 'accusative' instead of 'nominative' and v.v. and write the acc.sing for 'door' twice. Staring me in the face and I didn't see it. Thanks Susan and Periklis!

DEFINITE ARTICLE
singular=ενικός, plural=πλυθηντικό
*It may be that της in the fem.acc.pl is supposed to be τις (p.25 in our grammar text) - sounds the same but spelled differently - with iota (ι) instead of ita (η).
**την γυναίκα can also be τη' γυναίκα.

An email from our friend Sophia in AK

Some corrections: for plural: τις γυναίκες (not 'της') and the proper spelling is θηλυκό (not 'θυληκό'). Best regards, Sophia

and another from Susan:


Periklis has just had a look and says there are still mistakes.  He would quite like to spend more time on it that he has right now, so will maybe re-do the table tomorrow if that's okay?

OK dear Periklis, respected teacher, is this OK? Doing this over and over isn't such a bad way to learn and it's an honour to have not just a Greek speaker but a linguist to check our work.


Dear Simon. Funny how languages can be infuriatingly complex (in some of their subsystems) for no obvious benefit from an evolutionary point of view - other than, perhaps, making it possible for native speakers to tell locals from strangers after exchanging only a few words with them! Anyway, your table is fine now, apart from the following:  the names of the three genders are αρσενικό, θηλυκό and ουδέτερο;  and plural needs a final -ς, πληθυντικός. Enjoy your Greek-learning experience! Pericles

P.S.  By the way, there's no obvious correlation between the various o's and i's on the one hand and morphological categories such as nouns and verbs on the other:  you can get both o's and all three i's, plus all the various diphthongs, appearing both in verbs and nouns, as well as in adverbs and adjectives, pronouns and prepositions and so on and so forth.

Dear Pericles. Many many thanks...for your help. It doesn’t make it easier, but it still helps to know that o's and all three i's, plus diphthongs, are neither logical or regular all the time. I think that’s a sort of oxymoron though! Kindest regards. Simon

Dear Simon....As for the numerous o's, e's and i's, it may be helpful to notice that the Greek script was fixed in ancient times when the spoken language distinguished between long and short vowels.  During Alexandrine times, when Greek became the language of international communication over a vast area following Alexander's conquests, a number of distinctions were lost, as a result of which the language became more accessible to foreigners hoping to learn it in order to get on in life.  One of the distinctions lost in the spoken language was that between long and short vowels, writing though, being characteristically far more conservative, has preserved said distinctions. Thus, there's no  difference now in the pronunciation of the first syllable of παιδί (child) and  πεδιάδα (plain) but the ancient difference is still reflected in the spelling.

I know it sounds confusing, but English spelling isn't much different:  it still preserves differences in the spoken language that were lost a long long time ago, and your own examples illustrate the point very nicely indeed.  I hope that, when you get annoyed with what appears like complexities that serve no useful purpose in Modern Greek, you keep in mind that in Greek, if you see the written form of a word, you can pronounce it correctly (though the reverse is not always the case), whereas in English there's no guarantee that the written form will lead you to a correct pronunciation or that knowing how to pronounce a word also means that the correct spelling is at your disposal.

By the way, I don't know if Greek is more 'logical' than English, but I do know that nobody else does either, even if we were able to define 'logical' in this case, which we aren't....Pericles

** ** ** **
The weather's grey in England but in Corfu, at least during the day, and after the morning mist clears, it's balmy, even sunny; the cat's in Ano Korakiana are out basking writes Thanassis: