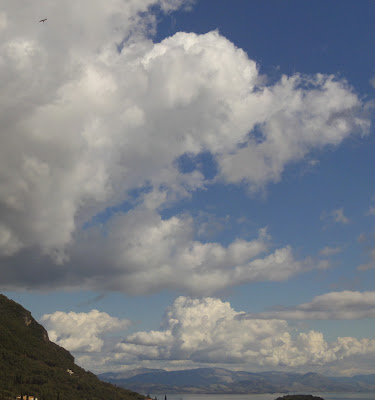 In seconds it was gone, the windhover, high over the rooftops, a kestrel flew, turned in its length, hovered and skimmed over the village and away upon the rein of a wimpling wing. The sky grey with rain has opened, so we’ve spent the morning lazed in the shade under the sun. Lin’s doing plaka. The chink of her trowel comes up from the garden. What a delightful day! Mum rose late – still aching from the unfamiliar bed, then with her pusher moved to the veranda. Dimitra and Leftheri, Natasha’s children arrived with a pot of grape marmalade and a litre of rosé. “I like your veranda and garden” said Mum “it’s a bit scruffy, not Chelsea-fied”. 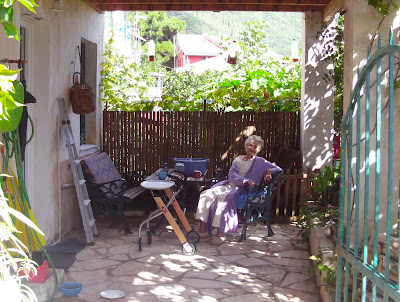 Praise for dappled things
Later, having refined the process of ascending the steps, we got mum in the car and took her to visit Corfu town, finding the €3 carpark free with plenty of spaces. In Theotoki we had cheese pies and wandered, part-trundled, to the Liston – slowly. Sally had phoned and suggested supper at Strapunto at bottle top corner on the way to Kato Korakiana. Earlier other friends had asked us for Sunday lunch and when I said my mother leaves on Sunday, said “Right we’ll have you for Sunday lunch on Friday”. On the Liston we visited an icon shop, examined some of the fine handpainted pieces, chatted to Maria there, and went on to Zissimos where Dimitri served me coffee and mum had chocolate ice cream which she spooned into a coca cola float - a delicacy learned from Americans just after the war.
We went on down a narrower bumpier street looking at shops, bought some olive oil soap for presents, plus postcards, Greek stamps, and a belt for mum “I’m getting so thin my trousers keep falling down.” Lin drove us to the taverna where Mark and lots of his family sat with Sally, artist of the long thronged table. Good company, conversation, and a spectrum of tasty slow food.
***
Victoria Jubilee business - a message from our secretary Scylla Parkyn came yesterday to say that the Association for the allotments is up and running. Reassuring news and so long as we pay our rent before the end of October we get a £4 discount.


Dear Scylla. We're away from Handsworth for a few more days, though having pictures emailed of the progress of some very late late potatoes (had to get something in the ground before Christmas!) on our plot 14. Thanks so much for circulating the latest minutes. I'm delighted to hear we have a committee and congratulate and respect you for taking on the secretaryship of the new Association, as well as Peter and Phil for taking on their roles. I suspect, from meeting people doing this at Uplands and Walsall Road, that the secretary has the most onerous of roles and should entitle you to some volunteer help digging your plot (:)). Lin and I are back on 14 October and will find a way to claim that £4 discount on rent. It sounds as if people have made good decisions.

I hope we can clarify the situation about beekeeping as this seems to be settled more by consensus on site than by the rules which seem very fluid on this subject. It'd be good to have at least one beehive on site if someone's interested. You recall that one plotholder took her bees away after Peter's colleague Mohammed for the council had settled in favour of a plotholder nearby who was anxious about an allergic reaction to being stung (I have the same problem but carry the medicines to deal with such an unlikely event and have no problem with bees being next door).

To be contentious. I saw the mention of a communal rotavator and strimmer. I applaud the idea of sharing more expensive gardening items but my aversion to the strimmer is the noise they make and the way they spread weed seeds and cuttings to surrounding surfaces. Weeds can be scythed or sickled if not dug up (some of them like the prevalent annual fat-hen on the VJA are even considered cash crops in India). Rotavators also make a noise but I can understand their value for dealing with the labour of digging and they are not quite as noisy as strimmers. I keep a sickle and a scythe (as does Robin Clark on a plot next door to me). I would be happy to give a talk on how to set, sharpen and use a scythe (and buy one). I realise that taking these views into account is not your responsibility. Treat this as a personal communication to the secretary and I'll mention these things when I attend a meeting if the matter arises (obviously you can say a member has expressed an opinion on this if the matter arises).

Has the conditional suggestion from a plotholder from Handsworth Park staff that he or a colleague would deliver free composted leaves collected in the park to the VJA later in the year born fruit?

I've been taking, as has my son, photos of the allotments. By this time next year we should have material for a good documentary on the progress of a new allotment site from scratch! Best wishes, Simon

12/10/10: Robin Clarke (spelled his name wrong above) has added 'While alive in a previous century I read that you have to leave leaves to rot themselves for five years rather than compost them. Not clear whether the parkies do that or have a clue. Staff in big institutions tend to be followers of the corporate propaganda (strimmers etc) at expense of wider wisdoms' adding re scythes 'Children need to be kept on a lead while use is being made of that silent grim reaper tool.  It's also not suitable for use by bungling bunglers (i.e. a high proportion of those who might).'
Posted by sibadd