Our neighbour’s youngest son, Marek, who we knew as toddler, is now in his late thirties. For the last two years he's been diagnosed as having Multiple Sclerosis (MS). He came round to see us in mid-August, a little unsteady on his feet, wanting to test our opinion of the work of Glasgow GP Dr Tom Gilhooly on the use of Low Dose Naltrexone as a way of reducing the progress of MS. We’d heard of neither. Marek alert to the blandishments of snake oil merchants wondered what we thought. He referred us to a YouTube of Dr Chris Steele, and said he planned to visit Gilhooly's practice in Glasgow, see what he made of him. While we were in Greece Marek sent me a ticket to a Birmingham based conference on LDN that would be attended by Dr Gilhooly. Marek wanted to know what I and other friends and his family made of all this. He'd been to an MS self-help society where no-one seemed to have even heard of LDN as a possible way of limiting the progression of MS. It's not a miracle cure;  indeed it's not a cure. It's a normal quite inexpensive prescription drug known for many years as a treatment in large doses (150 milligrammes a day) for people addicted to heroin and morphine which in small doses (3mg a day) may improve life for MS sufferers by reducing pain, spasms and fatigue, while increasing mobility, allowing better sleep and bladder control.  The trouble is that mainstream medicine does not take this use of Naltrexone seriously. No GP in Birmingham will prescribe it for MS and being an unpatented drug that is already familiar the Pharmaceutical industry is not interested in coming up with the funding needed to carry out the research that might provide the evidence that would persuade the NHS and therefore GPs to make the drug available to patients with MS.
On Saturday morning I cycled over to the Britannia Hotel off New Street to attend the conference, sitting next to Marek and his girl friend Pascaline, and his brother Andrew. I found the morning quite fascinating. There were no hard sells or indeed any sells at all. The people who spoke either explained their understanding of the way LDN treatment might work, explored its interaction, positive and negative, with other drugs; shared their puzzlement about what was still not understood about how Naltrexone affected the immune system, varied in its effectiveness for different people in different doses and sometimes seemed to have no effect at all, or only seemed to begin to work after persistent use when perhaps some other effect was the cause of change for the better. They also spoke of frustration at the reluctance of so much of the medical profession and their impatience with the MS Society for funding insufficient research, e.g.:


Currently there is not enough evidence-based information to prove LDN is an effective treatment for MS. The results of the most recent clinical trials are an important step in determining if there is any benefit for people with MS and the MS Society welcomes this research. LDN is not licensed for the treatment of MS in the UK. Some people with MS in the UK may have been prescribed LDN by their own GPs; however many GP’s are reluctant to prescribe LDN in the absence of phase III clinical trial evidence that the drug is clinically beneficial. The MS Society supports an evidence-based approach to research and as such does not recommend that people take unproven treatments outside of a properly regulated clinical trial.

*** ***
Zarina emailed worrying she was being monitored for her strong political views. I replied:


Z, Here.  If someone wants to watch you (or me) they almost certainly can, but with Wikileaks we can watch back. X. Simon (see also and FRAGO242 and Anthony Lowenstein) 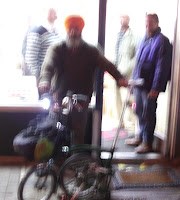 A meal on the Soho Road where I can expect encounters in small eateries with all kinds - in this case my friend Rajinder at the Quality Sweet Restaurant owned and run by an Indian film producer.  Rajinder casually expresses approval for the recession - "making people change." He's completing his studio near Walsall. "Next year I shall spend my time painting." An old millionaire dropped in chatting with Rajinder about the cities in India, America and Australia he'd been visiting. As I left, Rajinder as usual refusing to let me pay for my meal,  rich and poor stood by the restaurant door to watch me unfold my bicycle, heading home along wet roads in the dark.
**** ****
We've found a 7' x 9' garden shed on freecycle and found a 'man with a van' able to come with me to collect it from an address north of Walsall and take it to our allotment on Tuesday afternoon.
** **  **
Sunday supper cooked by Richard. Guy and Amy came round - exhausted from late working over the weekend and in our daughter's case on nights. She's just finished her formal police training, no longer with her tutor, but paired with another woman officer four years her senior. "It's good to have two sets of tits in one car" she said "Amy!" I protested "Don't get coarse on us." At their first joint arrest the suspect had phoned 999 calling for the 'real' police unwilling to be pulled in by two women. Yesterday they were at the home of a couple whose one month old baby girl had died, possibly suffocated in a tragic mistake but subject to investigation. The same day they were first present at an RTI -  three passengers in a car so compacted it was hardly unrecognisable. All three extricated but the driver likely brain damaged for life. "All drunk. Reckoned the car was travelling at 80-90mph" "Have you had to break bad news" "The other day at the home of a man, whose mother had just died of a heart attack in his house, told us he was phoning his sister. He got through, started to speak but couldn't. Then he just handed his phone to me."
** ** 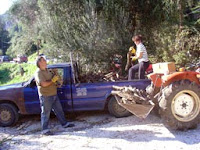 Autumn in Ano Korakiana has brought enough humidity to bring a surge of edible fungi. People get in wood for winter, reminding me of Breughel, and local election candidates appear in the Kafenion on Democracy Street. With great pleasure I see the panoramic still image of Democracy Street, just by the Church of the Archangel Michael, just before the 13 shallow steps down to our house, has been restored to the village website, along with others including the view from Ayios Isadoras seven hairpin bends up the road towards Sokraki and another of the interior of Ayios Athanasios - where I was on a Sunday last January -  at the foot of the village where on Easter monday the band begins its circuit of the whole of Ano Korakiana.

From the Ano Korakiana website local election news - candidates for the municipal elections on 7 November 2010 with village associations:

To which list Thanassis has added the note - in red:

*** ***
26 October 2010 - while doing DIY in the kitchen I hear a programme on BBC Radio 4 about the role of  students in thinking more wisely about the impact of diet, growing and cooking food and campus menu choices. It's like the 60s campus co-op movement yet I suspect more powerful because of the influence of an older generation  of managers and academics who can influence university procurement policies on Slow Food in the UK.
Posted by sibadd