Cycling through the New Forest 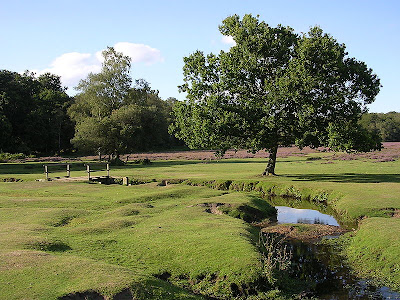 I cycled into town this morning, caught a train to Winchester to work through final details of a seminar on the potential of scrutiny with Mark Palmer and Janine Gill of South Eastern Employers which we’re leading tomorrow for members of New Forest District Council. In some ways I’m amazed we’re doing this. The budgetary pressures on local councils can make any sort of training and development look like a cost rather than an investment. Institutions and private consultants to local councils are making big reductions in fees. Inlogov has halved theirs. I anticipate a drought for at least six months until post-local elections next May sober minds see the need for training and education that in the longer term will save money and add to efficiency. Better pay to mend the roof. If we don't it'll cost a lot more later. After our meeting the train took half an hour to Brockenhurst, from where, rather than go on the highway, I cycled into the High Street, and turned into a track heading through the New Forest, heading across Butts Lawn past allotments towards my hotel at Lyndhurst. 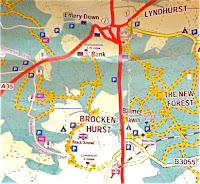 It was a further four miles but I had the forest almost  to myself, amid ponies grazing the commons, cycling on gravel tracks towards Rhinefield, intending to turn north to Bank and then Lyndhurst. I took a wrong turn despite directions from a passing cyclist but didn’t know it for a while. I met a woman walking and asked if I was heading towards Lyndhurst. “I don’t know. I’m a stranger.” Cycling on through open lawns fringed by gorse and heather I came to a gate and a wider gravel track, catching up with a couple trotting a dog cart drawn by a brown pony with red ear muffs. “Lyndhurst?” “Oh no this is the way to Rhinefield.” “Isn’t that the same direction?” “You need to go back three gates.” “Many thanks”. Retracing I came to a gentle stream lined with elder by a track that sloped gently eastward through dense birch, bracken, holly, oak, beech and larch. Lots of fallen leaves. A woman jogged by carrying a mock rifle on her back – practising for a triathlon. The evening was drawing in as I came to the metalled road to Lyndhurst and so to my hotel five minutes from the Council Offices where I’ll be tomorrow.

I doubt anyone knows what  the consequences of the comprehensive spending review will involve. My meagre knowledge, playing with economic models on a computer, suggests economies should be handled most gingerly – using tiny tweaks to avoid massive and abrupt amplifications. HM Treasury use the Combined On-line Information System  - COINS - model for mapping and predicting government spending. It's a voluminous body of dauntingly complex information which has been made more publicly available in line with the Coalition's vow to bring greater transparency into government. Economic researchers, journalists, and other private and public agencies are now accessing COINS, interpreting its vast data base and circulating analyses and interpretations - extensive, via reports, blogs and more blogs and in the style of twitter.
The coalition is charging at a gap in ill-charted shoals, doing invasive surgery whose effects may remove the targeted ‘disease’ but damage the patient irrevocably. But that’s what many are saying. The Chancellor says the CSR will prepare the way for recovery five years hence. We’ll have to see. I’d prefer an approach more akin to keyhole surgery, more incremental, because I don’t think anyone understands enough about how the economy works to steer it so confidently. The answer among the believers is of course that any new government of any flavour was going to make big cuts after last May’s elections. There was a consensus among the great and the good. And of course both government and opposition narratives include rhetoric for arguing that despite all contingencies the policy is working – or not. 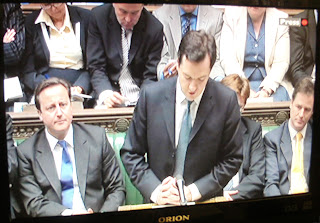 David Cameron, George Osborne, Nick Clegg - Coalition Leaders
*** ***
Meanwhile in Ano Korakiana Thanassis reports that despite bad weather work has begun refurbishing the old band room for the Samaras Philharmonia - Ο Σπύρος Σαμαράς - that has long stood empty by the road up to little Venice, and that tenders are now out for the supply of equipment to the building.