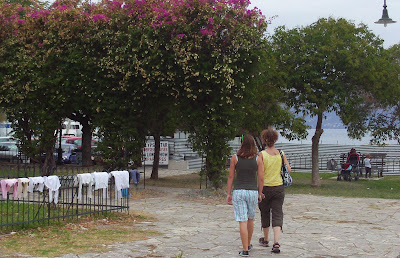 A dusky young woman wearing a headscarf was watching her washing – hung out to dry in the public square by the Old Port. I take it the laundry’s hers because of the small pair of trousers that must be for her son beside her. Modesty has forbidden her drying 'smalls', even his. Is she Roma? Is she Albanian or from that part of the mainland, making her living here in ways that don’t fit the habits or comfort of settled people - a category that includes tourists and people, like us, who go to and fro. She’s in Corfu Town, but I’ve seen her in Birmingham, trying to sell fat signet rings, accosting me in the aisles - hidden from the CCTV by the door and till, in an Asian supermarket on the Soho Road, simply begging between two toddlers for a coin to avoid the evil eye. "Eastern Europeans” we mutter, the new ‘other’ in the cities of the west, puzzling who’s who from Poland, Ukraine, Lithuania, Hungary, Roumania, Bulgaria, Kosovo, Bosnia Herzegovina, Croatia, Slovakia, Albania, Serbia and the rest of the fuzzy bordered Balkans up to the Black Sea and beyond; from Russia too, Anatolia and the lands bordering the Caspian Sea.


Maria in Zissimos - Ta Olympia café founded by Zissimos Papafloratos on Kapodistriou on the Liston - was chatting, when she could get a word in past me. "The other day there was a christening in a little church south of here. The family were in the church with the pappas, the food laid outside for afterwards. When they came out the Roma had been and taken it all away." I didn't doubt her, nor did she express a trace of animosity. It was something that could happen and of course should be prevented. In fact, oh dear, we giggled. And as Lin said later "How did they know it was the Roma?"

Another new stranger is deep black, camouflaged in the northern cities by earlier migrants from the Caribbean, hustling for vestigial asylum from poverty and war in Africa, from Nigeria, Somalia via Morocco and Egypt, more noticeable in Corfu, selling leather goods, touting pirate DVDs, already speaking Greek, the latest arrivals, knowing the survival value of a ready smile. These are not people who stand in queues in banks to get their pink forms – 'accreditations of exchange purchase'. They seldom have papers to keep in order, and certainly not credit cards nor a sheaf of web passwords for e-mail and the rest of the world wide web. These are people who governments can't slot. Collectively they arouse animosity or Sarkozy with his gift for recovering popular attention when the polls flow against him would not have proposed expelling Gypsies from France. What frustrates immigration officials is that these people even when they do get the papers needed to pass especially obstinate frontiers – mountains, deserts but especially the perilous sea – they are swift to be rid of them lest, arrested, they reveal even a provisional return address to border bureaucrats. They're outside the credit matrix. To tap into its services - medical care if injured, if child bearing, to cross borders, get a place to sleep, cook and eat, find shelter from the weather and make love, receive legal protection if arrested, they deal in the cash they’ve earned from selling counterfeit goods - handbags, toys, trinkets from China. They barter their willingness to perform services unrecorded by government - a vector for cash transactions among citizens sidestepping tax, who make the biggest profits from trafficking in people, drugs, guns and stolen goods; people, most of us never see, nor most of us ever expect, who live in big houses, have passports and citizenship by birth.
****
Meantime across Europe - strikes. And in Greece the truckers have returned to their industrial action. We notice the trucks parked in growing lines outside the New Port harbour gates, and the increasingly empty shelves of Lidl, showing just how much this supernarket sources outside Greece. We found better provision at Sconto, especially from an island butcher who holds a concession inside the Sconto we use at Tzavros.
Posted by sibadd