Just one more 'Out of Town'

A programme compered by his friend and colleague Fred Dinenage was coincidentally broadcast the evening that my stepfather Jack Hargreaves died on 15 March 1994. Fred when I met him at Jack's funeral in Salisbury and who knew Jack was ill at the time the programme was made, said it was typical of his professionalism that whether by luck or some magical intention it should have gone out the same night. Jack had a preference for the dangers of live TV, but this evening had been pre-recorded. Isobel, his wife of thirty years, who died in 1998, told me that though Fred had kindly sent her a tape shortly after the broadcast, she couldn't bring herself to watch it. I have not been able to find a recording - until now.

, JH: Just one more 'Out of Town' ~ 15 March 1994 from Simon Baddeley on Vimeo.\
A week ago Ian Wegg, who'd traced me through the internet, kindly sent me a DVD containing the whole programme, along with other films he'd recorded off air, including an Out of Town episode from 1980 and a tribute assembled by Fred Dinenage that aired on 28 March '94.

I’ve edited Ian's recording to show the 'special' of Out of Town that JH agreed to make for the broadcast, though the series had ended 13 years earlier, just before Southern Television lost its franchise. In this film, mentioned in one of Jack's obituaries, his shed is not the usual studio rig, but the real shed at his last home, Raven Cottage, near Belchalwell in Dorset. Who was behind the camera then? I don't know. The broadcast includes a reunion between Jack and his companion entertainers on ‘How!’ - the children’s series he invented.

I was on a train when the programme went out. A few hours earlier I'd been beside Jack’s hospital bed with Bay, my sister. He was in a coma; had been far away since he'd arrived at the Hospital a few days earlier; already becoming part of everything, even though he seemed so palpably there and just in heavy sleep. At moments I’d wanted to raise my voice and shake him awake but he was a long way off. All the same we spoke to him in case he might have heard us somewhere in some last liminal space. Perhaps our voices hovered on a riverbank as he gazed at a rise or heard us by the edge of some wintry wood in the evening or imagined all of us, Bay and me and Mum, in the suspended time of dreams, strolling up Regent Street together after seeing a film in Leicester Square long ago, feeling it was now. Perhaps our murmurs by his bed fused with our childhood chatter in one river - Lambourn, Winterbourne, Kennet, Enborne, Itchen and Stour flowing together. Perhaps I’d imagined him a little boy again remembering his mother and father and brothers and the bullnose Morris days long before he knew us; long before the war and its intensities, Fleet Street, television studios, advertising agencies, cities of the plain and their dangerous women.
Perhaps all these were fleeting together to drift on the surface like the sun's reflection on a cold chalk stream hiding for a moment the clean gravel, crayfish, caddis tubes and mayfly larvae, miller’s thumbs and brown trout suspended in the invisible current, with water crowfoot and emerald starwort stroking their golden scales.
Bay and me had eaten in Dorchester, then caught the train together and talked about Jack and Mum and our own children and us. It was the longest we’d been together for ages. I left Bay at Southampton so she could go on to London, phoning her husband Gabe to say she was on her way. “I think we’ll be back quite soon“ she’d said. Isobel rang me just after I’d got home to Birmingham saying Jack slipped away as the nurses turned him in the bed at 8-o-clock that evening when my train was somewhere between Banbury and Leamington Spa.

** ** ** This Thursday Paul Peacock, who wrote Jack's biography, drove down from Waterfoot in Yorkshire, collected me from Handsworth, and we drove on to Gloucestershire to Rock Cottage in Lydbrook, our small house in the Forest of Dean beside a path that curves up the side of Bell Hill away from the road and car access. It needs tender loving care after thirty years. We're hoping Paul and his family will take this on in return for the time they spend there. Rock Cottage from Simon Baddeley on Vimeo.
*** *** Teacherdude's Grill & BBQ posts an irritated commentary ...


What we see is yet another example of how 'access journalism' reduces reporters to little more than stenographers and cheer leaders for those in power and that by making so many compromises to gain access to their subject the whole point of a newspaper interview is subverted...

...on a syndicated Guardian piece by Helen Smith from the island of Poros about George Papandreou on the irony of a Socialist PM dismantling the Hellenic welfare state:

"As long as I feel I am doing what I think is right and just for my country, for the Greek people, that is enough for me. Saving Greece from this crisis was the first thing on the agenda. We are now on a much more normalised road." But he also concedes that the path ahead is strewn with difficulties. After months of angry protests and bloody violence, culminating in the deaths of three bank employees in May, it is clear that the Greek people are not prepared to take austerity lying down. For many, the recent respite is the lull before the storm – with worsening recession, galloping unemployment and mounting dissent within Papandreou's own party looming on the horizon. He accepts that in a nation where almost a quarter of the population lives under the poverty line, communication could be better. In the months ahead, as measures really begin to bite, there will, he says, be greater urgency to "get out more into the neighbourhoods and countryside" to convey the message that Greeks must bite the bullet of austerity in return for seeing their country emerge reinvigorated out of the crisis.

More about the drastic Hellenic Pensions Bill from Athens News 8 July 2011 - a piece by Dimitris Yannopoulos about the extent and range of this legislation driven by Andreas Loverdos - Ανδρέας Λοβέρδος - and on YouTube a strong speech to the Hellenic Parliament on 6 July 2010, with signing, received with applause and with five reminders from the President of the House, Philippos Petsalnikos, I think, on time limits. 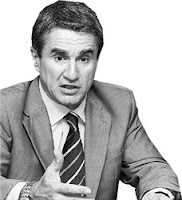 
Employment minister Andreas Loverdos on Friday tabled a draft bill on reforming Greece's pension system for the public sector in Parliament. Among the key features of the new bill is that it equalises retirement age for men and women, gradually abolishing rights previously held by women to retire at an earlier age if they had at least one child under 18 or had three or more children. For a brief transitional period between 2011-2013, both men and women will have the right to retire at a younger age based on these rules, increasing from 50 years to 52 in 2011 and 55 in 2012, while from 2013 onward the age of retirement for both groups will be 65, regardless of other factors. Age of retirement will also equalised for men and women with adult or no children based on the new bill. Women in the public sector currently have the right to retire at 60 years, compared to 65 for men. Under the new rules, both men and women will be able to retire at 61 in 2011, at 63 in 2012 and at 65 from 2013 onward. The exception will be men and women with handicapped children, where from 2011 the age of retirement will remain at 50 years for women, while it will be lowered from 65 to 50 years for men. Apart from the above, for pensions above 1,400 euros per month, the bill brings back the LAFKA fee and introduces the new "Pensioners Solidarity Contribution' ranging from 3-10 percent. It also places those hired in the public sector from 2011 in the unified IKA pension system and equates the status of public-sector pensioners with those of the private sector in other ways, establishing the same system of a 'welfare' and contributions-based pension for the public sector from 2015, while it abolishes the right to pension for unwed adult daughters with the exception of those that are judged incompetent or are still students.

... and more details of the depth and range of austerity measures from Athens News - 12 July 2010:

• Benefits for public sector workers not already scrapped will be reduced by 8%, while wages for state enterprises employees will be cut by 3%
• Annual holiday bonuses only for civil servants earning up to €3000 per month are capped at €1000 (250 for Christmas, 250 for Easter and 500 for summer holiday)
• Annual holiday bonuses for public sector pensioners capped at €800 (200 for Christmas, 200 for Easter and 400 for summer holiday)
• Holiday bonuses axed for civil servants and public sector pensioners earning more than €3000 per month
• Current public sector salaries and pensions frozen for at least 3 years
• The second installment of a handout to low-income workers is scrapped
• All 'high-pension earners' of €1400 euros or more will experience reductions (LAFKA) of 5-10%, depending on pension brackets, which range from €1400 to €3000 or more
• Pensions calculated on the basis of full-career earnings and eventually capped at €2500
• Drastic revision in private sector labour relations, impacting minimum salaries, mass layoff limits, collective bargaining arbitration and severance pay cuts VAT increases from 21% to 23% for all commercial goods, and from 10% to 11% on basic goods and public utilities Special excise taxes on fuel, alcohol and tobacco taxes raised by 10%
• lllegal construction and open-space penalty taxes
• Special annual levy on very profitable enterprises
• Increased taxes and licence fees for electronic and gambling games
• Increases in the objective valuation of buildings
• The Public Investment Programme will be reduced by €1.5 billion over the next year