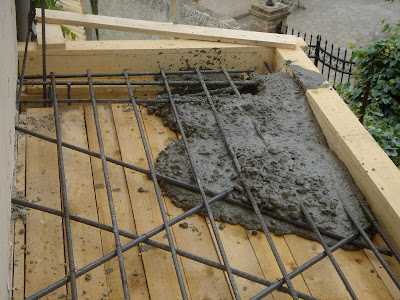 Saturday, the day for the laying of concrete on and in the shuttering Alan’s constructed for our external stairs and balcony, began grey and cool – better to ensure the wet mix remained fluid and would not dry too fast. Yesterday and this morning, aware of the weight of wet mix the mould must bear, before the iron rods drilled into the house wall and woven into the new structure would - with hardening of the concrete - set into a robust structure, Alan and his new helpers, Miki, Aris and Ilias, were wedging in more wood and another scaffolding pole to ensure the shuttering would support the porridge of gravel and cement to be poured onto it. The first mix, waterproofed and strengthened with Revinox, went into the end support for the balcony – three vertical metres. As Miki tamped it down with an iron rod, concrete oozed from the bottom two feet of the shuttering, splaying them slightly. Swiftly Alan applied clamps that drew them flush and Miki nailed on strengthening wood at the joins that had begun to pull apart, shovelling away leaked concrete. Forewarned he also added a buttressing plank below the bottom of the stairs. Thus through the morning, concrete was poured at each end, like filling an assymetric vessel, with the final mix used for the floor of the balcony. People we know passing by along Democracy Street, seemed pleased and impressed by the work. Around two, the sun came out. Alan came round around in the evening to spray the concrete to delay its setting, and I’m to do the same at intervals from first thing tomorrow. Meantime we’ve started the tidying up we must do in readiness to return to England next week - barring further delays from volcano or strike. Alan’s found us doors to replace the present window that had replaced the French windows off the original balcony. “They’ll open out. With a lock so you have an alternative entrance. OK?”

**** ****
I’ve begun reading The Pickwick Papers. Like Don Quixote with which it’s compared, I’ve had several attempts to get started on both novels and as with a failed but promising soap that’s abandoned after the first series for lack of viewers, I’ve so far switched channels. It took a long Spanish holiday to get into Don Quixote. After a short while – or so it seemed with time more languorous - I was looking forward happily to the next episode while picnicking between swims off a deserted beach – the Galician coast, its rebellious population deprived of development by Franco’s disfavour, was like that in the mid-1970s - slow-munching crusty bread plus tinned sardines, ham or Spanish sausage, sipping wine cooled by the Atlantic. The novel's length now a reassurance rather than an obstacle - a promise of continuity inside Cervantes' imagination. Our pace, 40 years later, now serves Dicken’s first novel. I’ve just grasped that Sam Weller is to Samuel Pickwick as Sancho Panza to Don Quixote. I grasped what Wikipedia take for granted when I saw the line near the end of Chapter 10 in which Sam Weller first appears ‘Mr.Pickwick was a philosopher but philosophers are only men in armour, after all’ with a note from the editor.
* * *
And from an invaluable tipster somewhere in the vicinity of Pompey - surmising what I can't get from local BBC, Skynews or the net:


Dear Simon, You're right about the interesting part, and righter still (says me) about the yawning gap between "the national interest" (defined any of three ways) and the coal-face JFDI of making local administration (The Small Society??) actually work. And one further point: that the future electoral shape of the country should be in the hands of three guys knackered to the point of probable incoherence is utterly nuts. But here are some predictions...

The penny dropped with NuLab about 24 hours ago (after his phone rant at Clegg) that Irn-Bru is the roadblock to any possibility of the so-called Rainbow Coalition. As we speak, La Mandelson is bending the great man's ear. So far, he's agreed a yet-to-be -announced holding statement promising to be gone within eighteen months. By teatime, this will have shortened to "about a year". He'll in fact resign in a 09.00 statement tomorrow morning, vacating Downing Street for the caretaker premiership of HH. By now, Tory/Lib Dem talks have ended in deadlock after the Trafalgar Sq Electoral Reform rally. The markets are in freefall, NuLab are hastily organising a Leadership Contest (Balls v Milliband v Milliband with Cruddas and Johnson wisely ducking out), and a taxi containing the sainted Nick arrives in Downing Street. Under the increasingly stern/anxious guidance of Cabinet Office civil servants, talks begin. On the other hand, Clegg might show his true colours, do a deal with Dave, split the Lib Dems asunder, and flush out the uber-Tories for a proper bloodbath...
Either way, I suspect we may be stuffed. Three days ago exile in Greece seemed unwise. Now I'm not so sure...Best, Graham.

*** ***
Today the European Financial Stability Facility (EFSF) was agreed. What an exemplary bureaucratic monika for a political decision.
Posted by sibadd