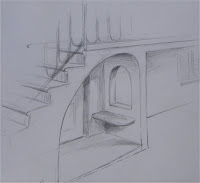 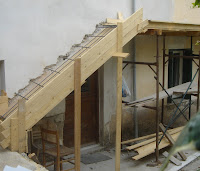 Honey and Alan came to tea. Alan brought a sketch of how the door below our balcony might look. Leftheris - he a retired builder, my age within a month - discussed the design with Alan pondering stresses, the arrangement of iron bars inside the concrete support. 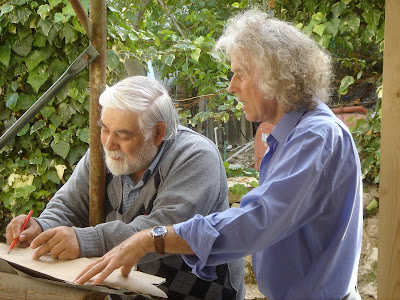 Leftheris and Alan discuss the balcony
We went upstairs where Lin had prepared smoked salmon to be sprinkled with fresh lemon from our tree, and pepper; crusty white and brown bread on which to spread cold butter; a salad of tomatoes, peppers, olives, spring onion into which were mixed small squares of crumbly fresh feta, to be dressed by choice with oil and vinegar or mayonnaise; brie, cream cheese, and edam and dried sausage to have as extras; tzatziki, crab sticks and taramsalata. To drink we had cold lemon tea, white and rosé, green tea and coffee. We talked of flowers and growing trees and shrubs – Honey had brought round an oleander and a jasmine for our garden and earlier Alan had dug up and brought us three small Judas trees; of insects – those we valued, those we killed; rescuing spiders; the art of joinery; architectural pleasures and monstrosities (like the Achilleon Palace), potholes and the positives of filling them in oneself; 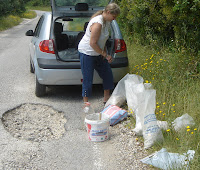 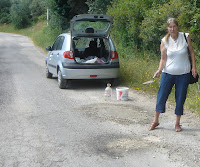 the way planning worked in England and Greece; buildings that collapse and why; doors that won’t shut and why; the state of the world…in Greece, in the rest of Europe, in America.
****
Today I went into town to get some money from the bank, parking far out and cycling in past a street march on behalf of teachers and a demonstration in Sarocco Square by service workers; large banners; chanting and speeches. I spoke to two demonstrators and expressed sympathy for their fears of their future prospects. “Greece is only the start” said one. At the bank the familiar cashiers weren’t to be seen and their desks at the counter were empty. Someone came round to serve me. All efficient, but when I asked for the pink slips we need for our tax record, she said “there’s a strike so we don’t have them. Come again.”
***
Amy phoned. Did we know UK airspace was again closed. We were going to make it to her wedding on 17 May? We’ll keep our fingers crossed but I’m sure we’ll be there. I’ve to make a speech as father of the bride and give her away.
** ** **
Two friends doing maintenance on a house for sale in the village decided to give a bit of their time and energy to doing up the small playground between houses off Democracy Street 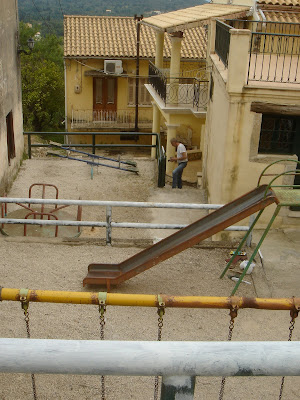 and in the meantime work was also being done on the property over the path from us, turning an apothiki (garden shed) into an extra room, and Leftheris has brokered a deal with the builders to share their cement mixer and labour with Alan, pouring concrete for our balcony and steps next Sunday. 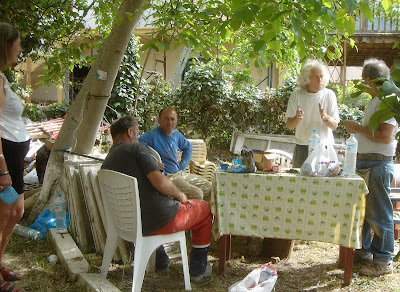 *** ***
I wrote a note to a friend in England who, several years ago, was the appointed interpreter for an interview between police, customs and revenue officers of a man 'helping with enquiries'. She found herself being asked to play her part in an increasingly oppressive interrogation and eventually suggested terminating the interview until a solicitor was available. As a result she has been drummed out of her profession (elsewhere I've pointed out the ethical and practical dilemmas that might be presented to a conscientious interpreter seeking to observe the provision of 3.2 in the NRPSI Code of Conduct). I was her 'friend' at a travesty of a professional hearing on the incident and have written several letters direct to the Chair of her disciplinary panel and on her behalf as the matter has dragged on. Yesterday she included me in a general reply to friends in which she spoke of facing 'a life of retirement with no honour!'


Dear Zarina. Thank you very much for copying me into your recent reply to Yilmaz Duzen's letter to APCI members.
I deny that you face a "...a life of retirement with no honour!" Quite the reverse. When one of those moral tests came your way, and they come at times and in places not of our choosing, seldom when we're prepared, but more likely, when we least expect to have to take a stand, when we're in the middle of 'something else'; on those rare occasions when moral stature is tested, so many of us instinctively look the other way, or pass on the other side...!
In your case, when the moment came, despite the odds against you, you did the right thing. You refused 'to obey orders'. As in the notorious Milgram experiment (average blind obedience still being replicated I'm sorry to say), you were one of those rare subjects who did not think you should continue doing what the norms of the situation demanded. For what you did in those few seconds you can always look at yourself in the mirror knowing that though you paid a price for it, when push came to shove, you shoved.
In words the playwright Robert Bolt puts in the mouth of his 'Man for all Seasons' - Sir Thomas More - if we "come to such a case that there is no escaping, then we may stand to our tackle as best we can...(and) we may clamour like champions, if we have the spittle for it." You did. You do!
If we were always rewarded for acting honourably, honour would mean little. You, through an action that has led to the most damaging consequences for your career and standing, added value to the currency of human decency.
I'm forever proud of you for that intervention, for what you did when you saw the turn that was being taken in that interview, when you realised almost as a reflex that as well as being a talented interpreter, you were also a moral being.
It's rare to come through such tests with one's integrity not only intact, but stronger. That you may still harbour doubts on that score, only affirms my point. One day, Zarina, your example - especially as the incident is on tape - will be used to give guidance to others on the ethical duty of an interpreter. X and respect, Simon

The more public this travesty becomes the better:


My Dear Friend Simon, I am overwhelmed by your response and how you stood by me all the time even after I was 'suspended'. I am taking Ruth Daniel in her 80+ to vote, she is right by me watching things on a computer, we

had coffee together and saw your message right at the top! Bless you for such a moral and spirit boosting message to me and my friends in pain! They could explore your blog! Will speak to you soon if you are in Birmingham! Love, Zarina

Thanassis mentions 'citizen action' by 'our foreigners' - τους «ξένους» - on the Ano Korakiana blog on 7th May:

The message is that 'slowly slowly' - Σιγά-σιγά - we are all beginning to pull together to sustain our village - our community «κοινότητας». 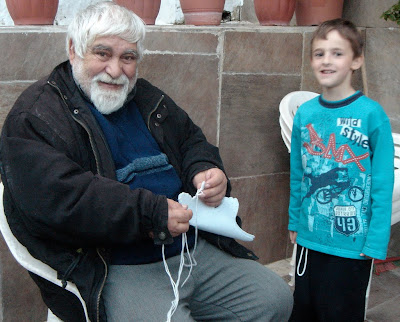