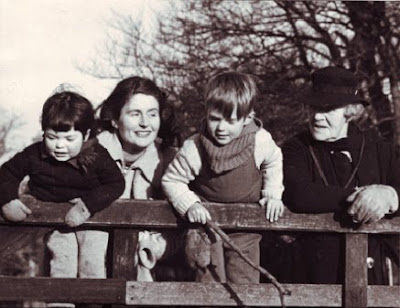 My sister, mum and great grandmother at Itchen Abbas in 1944
After I'd finished a day's tutoring a rewardingly enthusiastic group of local government professionals in the King Charles Suite at the Guildhall in Winchester, I cycled out of town on the Alresford Road, turned left down back roads towards Easton until I came to a road bridge over the Itchen. I munched a Cornish pastie I'd bought in town staring at the water, a swan working its way upstream sifting the riverbed - it's head below water for a minute at a time. It began to drizzle. A footpath by the bridge meandered across damp wormcast fields separated by wooden kissing gates - slightly tricky to negotiate with the folding bicycle - towards an avenue of gnarled lime trees, home to crows, that runs between the road through Itchen Abbas and the river. 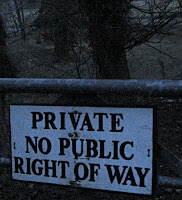 The light was going. On the avenue I turned down where I remembered the land flattened into water meadows, passing through a gate, left my bicycle by a heap of ivy covered logs; strolled past Grey's Plot towards the river. It was running fast and high. I remember, gazing into its swift crystalline water - a first inkling of being in harm's way when I was four; when I'd wandered down here as children could without causing anxiety. I'd lie on my stomach peering over this bridge watching the dappled wild trout inches from my face, edging across the gentler summer current, drifting back with the stream for an instant almost stroking the crowfoot, resuming station, unworried by the small break in the even shadow of the bridge on the sunlit gravel.

The past was far away; something gone. After a few moments I wandered up The Limes - Grey's Lea - to the Winchester road, gazed for a moment at Bignell's Cottage in the gloom. The present was too intrusive - the rain, the constant rush of passing cars, the plethora of signage, the dominating roar, like distant falls, of traffic on the M3 to recover an inkling of an intimation of childhood ... 'the things which I have seen I now can see no more.' It mattered not a jot. Revelations come when they want, unplanned; unlike this small pilgrimage to a place I'd visited only once before in over 60 years. I was content with my present ride and walk. The rain fell more strongly as I cycled back to Winchester in and out of the dark, dazzled by passing headlights, passing tyres splashing my waterproof trousers, rain seeping into my shoes. "This is become the land of car people" I muttered, but I'd enjoyed the ride; enjoyed getting back to my hotel room, putting out my wet things to dry, settling in to read Ismail Kadare's The Siege - written in Albanian in 1970 it's taken over thirty years to get his work first into French and then into English, a reminder of Albania's continuing impenetrability and fascination. And now, on a recommendation of Danica, who met him and lived near him in Belgrade, I've gone and ordered a tricky sounding book called Dictionary of the Khazars by a Serbian writer, Milorad Pavić who died last year. I can almost date my interest in the Balkans - October 2008 - alongside a wider curiosity about Eastern Europe. I saw this article by Tim Judah in my mother's last edition of the New York Review of Books, Vol 57 (4), 11 March 2010 - At Last, Good News from the Balkans [see also Balkan Insight]:


If you only want bad news from the Balkans, it is easy enough to find. You can read the next few lines and then read something else. Bosnia is on the brink of war again. Kosovo's independence is 'a failure.' Serbs are scheming, unredeemable extreme nationalists, and organized crime is everywhere. In the last few years I have come to understand that many people outside the region actually want to believe the worst: they want black and white when, like everywhere else, real life is a shade of grey. I am not arguing that, fourteen years after the end of the Bosnian and Croatian wars and almost two years since Kosovo declared independence, serious problems do exist. It is just that in many respects things are not as bad as commonly believed. 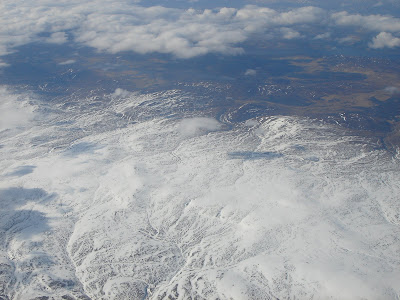 I was flown from Inverness on Wednesday, leaving the last of the snow, stopped for a few hours in Birmingham to pack and collect things for teaching, a poached egg on top of a welsh rarebit from Lin, then cycled to New Street to catch a train to Winchester for two days on 'Managing with Political Awareness' for Hampshire County Council.
I dislike CrossCountry Rail; noisy trains, dirty lavatories, crowded with little space for luggage, a management that exudes indifference to passengers. I dislike the trainline too*, having the nerve to buy advertising that presents rail passengers who buy tickets at the station as sheep. Even so I enjoy train travel, suppressing my ire at the state of our railways, sitting back and thinking of better times. It's even possible that Lord Adonis, were he given the time, which is unlikely right now, could breath a new spirit of reform into this intractable mess. (*June 2012 and I now use the Trainline website almost exclusively. V. user-friendly) 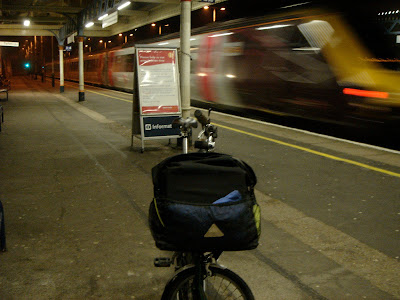 Dropped off at Winchester
Posted by sibadd