Sunday evening marked Korakiana’s Vasilopita - a convivial tradition to mark the coming year and recall the last. It was at Luna D’Argento, a barn sized timber roofed building next to Sally’s stables belonging to Sally’s sister Rachel's brother-in-law and her parents-in-law. Lin and I checked with Leftheris that it would be appropriate for us to attend. After dark we walked from the main Ano-Kato road down a driveway decorated with many little white lights hung on surrounding trees. Outside it was chilly with just a few people behind us. Inside was bustle and glitter. A large square cake was on the centre table – the Vasilopita cake. Several generations were assembled to watch many performing in the celebration – the ambience of a family table multiplied. Free soft drinks were passed out from the bar. Starting with tribute speeches from the low stage led by Ano Korakiana's President referring to people and events, the music began; first a jaunty song, the singers strumming mandolins, then the Samaras Philharmonia spread across the centre of the hall struck up with tunes even I could hum – Get me to the church on time, the theme from Gladiator, Amazing Grace - followed, on a cleared stage, by the choir singing Greek songs, finishing with dances in traditional costume, the last of these special to Korakiana. Large pieces of cake were swiftly distributed. Any worry we might be intruding was dispersed by the kindness of our welcome, being beckoned to sit by the Leftheris, seeing parents and grandparents familiar to us carrying or leading small descendants, amid constant contented chat with pauses to applaud. The choirmaster asked very politely for more quiet at one point. I didn’t feel self-conscious about taking a few pictures, noting that Katya Spingos was, as she has at other events we’ve attended, acting as photo remembrancer while Thanassis, her husband, chronicles the life – past and present - of the village on its website.

I would like to see inside the old Ionian Parliament building as I’m sure there’ll be busts, statues and plaques in memory of Ionian politicians to include in an account of the Protectorate, but it seems entry is only possible if some other event is going on there or a generous cleaner lets me in. I've also just read of a new book shortly out - The Ionian Islands and Epirus: A Cultural History (Landscapes of the Imagination) by Jim Potts which I'll order but it won't be with me before my chat on 3 February. Jim has agreed to see me for coffee. He says he's talking about his book at the Durrell School on March 3. (see also)

Our week of blue skies is drawing to an end. It will be warmer but wet. I’ve bagged up sun dried driftwood on the balcony and put it under our plastic table now replaced by a cedar table, mildly dilapidated, found amid overgrown rotting wood, carried by us to the house and hauled up to the balcony by rope, after sanding and scraping off crispy remains of varnish. Its surface shows little sign of previous life, the small burns, grazes, scratches and stain that clue the use of some old tables. Between the three good cedar planks, nailed to the frame, that makes its top, there’s no cavity in which a delicately extracted core sample might afford evidence of previous owners. Was it normally covered by a table cloth; treated as a best table, not for any craft – beyond conversation? Each stout square leg is gently tapered with two fluted grooves on each side – 32 in all. The bottom of each leg had rotted from long standing in rain, but equally and the dead wood is all gone, dried away in summers, so the table stands firm. The bottom outside edge of each side panel, just above our knees, has been gently rounded below a discrete routed groove. There’s a drawer missing which we’ve measuring for a replacement, to hold cutlery. 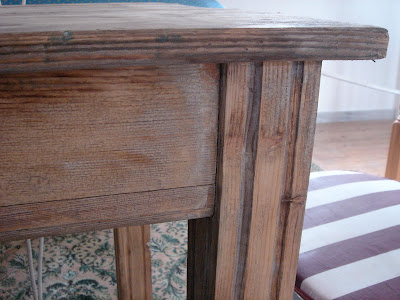