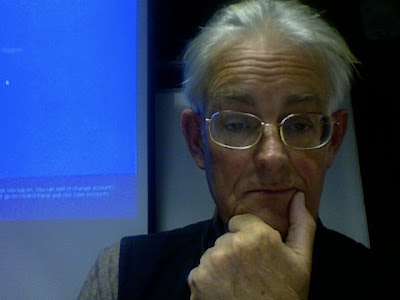 The word sceptic is being bandied about at the moment - coming into disrepute as meaning 'head-in-the-sand' refusal to admit to the possibility that humans might be creating climate change. As someone who believes it's very likely we are causing climate change, I'm also one who, when it comes to trying to understand, digest and draw conclusions from the scientific information on climate change, strives to be a sceptic.
The original version of scepticism was about denying the possibility of knowing anything. Skeptomai which connects to Classical thinking about the possibility of proving things to be inalienably true translates as 'to look about, to consider' - in these terms the best you can hope for is a considered opinion about the likelihood that something's true. So if I jump off a roof it's only my 'considered opinion' that I could suffer serious injury or worse. Hm. That interpretation of scepticism can be distinguished from scientific (or empirical) scepticism which involves a disposition to question the reliability of certain kinds of claims by subjecting them to systematic investigation. Scientific method details the specific process by which this investigation of reality is conducted - which means that anyone who tries to think scientifically ought to be sceptical, even when investigating the climate. This is why the distinction ought to be - but isn't - made between climate change sceptics as people who think scientifically about the nature of climate change - and climate change deniers, who argue, as an article of faith, that climate change is either not happening or that if it is, it isn't caused by humans. The converse to this is that, of course, the world is full of people who believe, as an article of faith, that climate change is happening and is caused by humans.
Amid the passionate urgency of the present, some scientific thinking about the data available on climate change has become conflated with denial of climate change and its causation. The noise of political debate - polarised and vehement - has submerged scientific discourse, presaging, if not religious war, confrontation between those of different faiths. There's a point here about incommensurable ways of looking at the world. 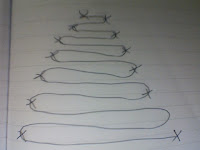 Long ago Jack drew me a diagram describing what happens when cogent differences between academics go public. It was a snake-like line that started small and grew largest at the foot of the paper. My stepfather placed crosses at each curve of the snake. "At the top you could have two scientists debating the interpretation of evidence - opposed but arguing politely across a small table.

Further down you have social gatherings - seminars, colloquia - in which contrary views on a subject of public interest are debated before a robust chairman in a setting where accepted etiquette proscribes ad hominem abuse and good behaviour overrules hostility in the expression of opposing views. Continuing down the diagram, separation between opposing positions becomes greater, the quality of debate declines, politeness goes out of the window and followers of one side throw verbal abuse at the followers of the other. 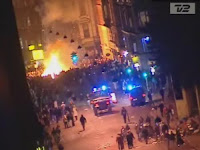 At the bottom of the 'snake' fervent followers of those sober academic debaters are refereed by ranks of riot police - surrogates for the enemy, representatives of the state - amid smoke, flames, teargas, fire-hoses, batons and broken glass.
* * * *
I asked Lin the other day "Are you a sceptic about climate change?" "Yes" A pause. "That doesn't mean I don't think we're crazy to keep relying on fossil fuels, when we have solar, wind, wave and geothermal energy to hand. It also doesn't mean that I don't believe the climate's changing right now. I'm just not convinced that present changes are so different from earlier changes before we were around, which again doesn't mean I don't think there's urgent need to adapt to what's happening." Pondering the practical implications of her views I found it difficult to see how these would be different if she was convinced by the available evidence that climate change is caused by humans. She reserves as much moral opprobrium for those who waste energy, create pollution and evade the practical implications of recycling and sustainable living as someone who's convinced, or like me, pretty damn sure, humans are causing climate change.
[see Elizabeth Farrelly on this - the writing alone, from this Phd in Architecture, delights, especially coining the term minchinsaur to make fun of Senator Nick Minchin:

Think of it as risk management. If the climate-changers are wrong, and we go that way, we still end up with a clean world, free of oil-addiction, and a new industrial revolution to ride for the next millennium. And we get to stand for something, for once. Whereas if the deniers are wrong, we'll be found, petrified, with our pants down, facing the rear view, kissing our arses goodbye. This is what renders Phil Jones' climate-gate treason unpardonable. In fudging the crucial facts, Professor Jones and his colleagues fed the Minchinsaur deniers steroids, strengthening their inertia and encouraging the very catastrophe they hoped to avert. I'd suggest burning at stake, but for the fossil-fuel emissions.] 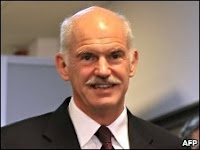 From Helena Smith, Guardian - 13/12/09: George Papandreou will be in Brussels to announce his government plans to curb the spiraling debt and deficit that led to Greece's recent credit downgrade. He's also talking to union and business representatives about the medicine needed to recover the Greek economy. Greece’s eurozone partners want drastic measures, especially tough public sector salary cuts like Ireland's. Analysts from Moody’s will be in Athens today following the downgrade by Fitch and a warning from Standard & Poor’s.

Tomorrow Papandreou meets opposition party leaders to discuss how to curb corruption which he's described as "endemic in Greek society" including tax evasion. Finance Minister Giorgos Papaconstantinou speaks of bringing in a “completely different type of taxation” to crack down on this. Other structural reforms include opening up 'closed shop' occupations – including notaries and accountants – and much-delayed social security reform
[18 December 2009 Malcolm Brabant 'Greece caught between voracious bankers and militant workers'] [7 December 09: Swiftian irony in a Nikos Konstandaras op-ed from Kathimerini on new tourist ideas 'Live your myth in Greece']
** ** ** Sir Ken Macdonald had choice words in today's Times about Mr Blair's 'deadly war ... entirely the work of warriors cast carelessly into death's way by a Prime Minister lost in self-aggrandisement and a governing class too closed to speak truth to power.'
* * *
My cycle ride home takes me through the Birmingham Christmas Market where amid the crowds I drink a mug of mulled cider and an enjoy a Kraków sausage and watch the roundabout; not an arid device full of circling cars but a Carousel with an organ playing and lots of bright lights and shiny things!
Posted by sibadd