Over the centre of Australia 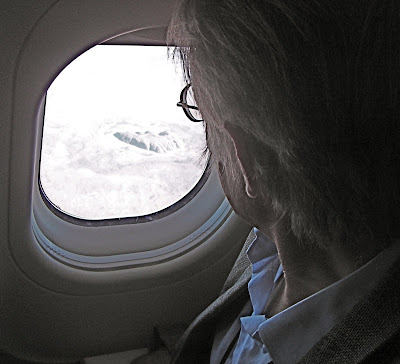 Around 2.40 local time we flew over Ayres Rock, Uluru its Aboriginal name. At the same time I was reading of Elinor Ostrom's Nobel Prize for economics. She's author of Governing the Commons, and John's copy of a short speech by John Bryden at the 2009 CRRF/FCCR Conference on The Idea of Local Development: Some transitional observations and research implications. (link not available, but see another of Bryden's lectures)
An email to Handsworth friends:


Dear Rachel and others. Hi from Australia – where I’m teaching. I took 6 of my Japanese students to visit the Walsall Road Allotments the other day courtesy of their secretary Betty. They are doing a fantastic job there, led by Betty, who is quite an exceptional person. I understand the city allows WRA to be self-managed, and self-managed they are. A positive haven of social activities around the core function of growing food and flowers. 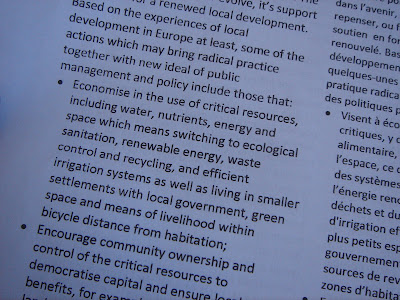 John Bryden's talk
It pulled me up hard against the scale of the task that will face those finally arriving – we hope in early 2010 – to work plots on the new Victoria Jubilee Allotments. The city allotments section has been drastically cut back. The Birmingham Mail mention 65%. They’ve lost Eddie Campbell.So while I’m aware of the personal and social potential of a thriving allotments site next to Handsworth Park I’m also thinking of the work involved trying to imitate a site like Walsall Road or Uplands.By the way if you peer through the railings in the park at the right place you will see that the gardeners’ meeting shed has been delivered and seems to be in place. Apparently one of the bid delays at present is that the education department of the city is not ready to take delivery of the new cricket pitch in its current state. They’re wanting to delay hand over until the point where they have no immediate demands on budget to make the S106A green space 'fit for purpose'. Best wishes and I’m back Nov 28. Simon (Australia, Oct 24-Nov 28)

* * * There's a rumour that talented Penny Woolcock's film 1Day about the Johnson Crew and Burger Bar Boys, largely shot - yeah yeah - in Handsworth, has been banned from some Birmingham cinemas. Seems unlikely, unless publicists engineered attention to what looks like a blacksploitation film despite earnest assurances from Woolcock - a talent who's Macbeth on the Estate in Ladywood I really liked. She's been roaming Handsworth for a few years; suspect at first, then breaking through via a connection with Dylan Duffus, who'd been pointed in her direction by Vanley Burke: “The film shows" she says "how people get sucked into that life and it clearly spells out the consequences, which is people end up dead or in prison. The film absolutely does not glamorise that lifestyle. It has a clear moral message.” ... like Romeo and Juliet doesn't glamorise romance because they both die after being sucked into a passionate affair against their parents' wishes. 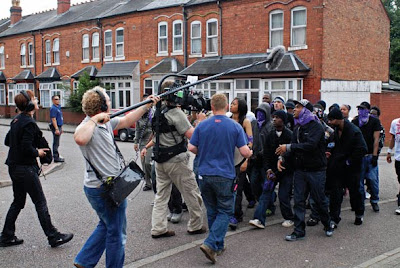 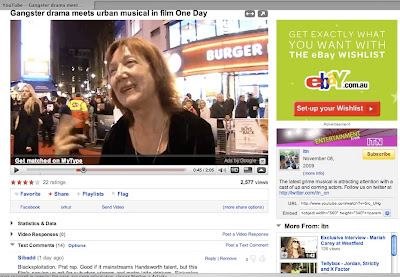 I may fret at the disingenuousness of Woolcock's disclaimer, especially after long and repeated campaigns in Handsworth against gun crime, but some local boys and girls have got a deserved break into show business and can thank Penny and their talent for that (Steel Pulse - my first intro to local talent long ago). Perhaps the 1Day cast will come back into schools, riding bicycles even, to pitch impressionable children away from guns and drugs.

I was reminded about getting too worked up when I read in Tim Winton's Breath - my imagination's first and recent introduction to something I'll never do - though I've acquaintance with the deep - a reason for being happy to live in Birmingham, as far as anyone in England can live from the sea (Winton: 'I was in my thirties before I learnt that I too would prefer not to see what I could no longer have'). Instead of reckless surfing, Winton's characters could have been doing the sorts of things 'that schools and governments sanctioned ... as army cadets, learning to fire mortars and machine-guns, to lay booby traps and to kill strangers in hand-to-hand combat like other boys we knew ...' (p.106)
Posted by sibadd