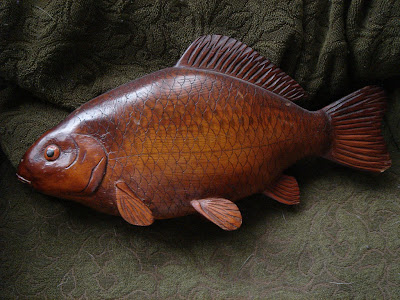 In the post awaiting me in England was a handwritten letter from Richard R. Hill, introducing himself as featuring in an Out of Town film in 1975 involving fishing for Black Bream at Littlehampton. As holder of the copyright for all of JH's writing and films Richard wondered if I'd give permission for a copy of the film to be released from the South West Film and Television Archive in Plymouth. Done at once. My letter sent to him and copied to SWFTA by email. What especially interested me was that Richard mentioned in his letter that he'd done wood carvings of fish and that some of these were shown by Jack in the same film. Was this the man who made the beautiful carving, left me by my stepfather, of what - because if its reddish eye I took for a roach but for the shallowness of its tail-V and its long dorsal fin making more like a common carp or - the likeliest candidate - a large crucian carp?


[Back to the future 15 October 09: I've just had an e-mail from one of Richard Hill's children: '... Unfortunately, and a big unfortunately, this is not the fish that dad carved for Jack! The fish was mounted from memory on a black background and framed in wood. It was definitely a roach that Jack had and dad can confirm that the fish you have at the moment is definitely a crucian carp and has commented on its quality.]

Before writing back to Richard, I'd phoned the Archive and given verbal permission. Mike said he'd be able mail a DVD of the requested film to Richard and told me that a whole lot of Out of Town and The Old Country in 16mm had been delivered to the Archive "in a white van". I know something about this and phoned Paul Peacock to suggest he had a chat with Mike about the possibilities of marrying sound and film in the future. I'm going to have visit the archive and find out just what is down there. For the moment I'm delighted to think I've discovered - through no effort of my own - the carver of the fish....and goodness me! It's 2-o-'clock on a windy leaf-blown October afternoon and he just called me by phone, having already got my letter. "It's a roach" Richard assured me. He and I spoke for a quarter of an hour and promised to stay in touch. I've not see the film in question, filmed off Littlehampton from a boat called Pauline - skipper Charles Fox. "A wonderful day! I'll always remember it. Mr.Hargreaves was new to sea fishing then but by the end of the day he was catching those bream as well as the rest of us. I can never pronounce the cameraman's name. Stan?" "Stan Bréhaut" "That's it". We agreed as soon as the film arrived Richard would let me know. I'm a lucky man.
* * *
Email to John Martin on 4 October 2009:

Dear John. I've know processed the following DVDs and film clips, so that they are sufficiently compressed to go on my laptop desktop as MOV or AVI files which can also be put on CDs to transfer to another laptop or be webstreamed, if and when we select appropriate extracts. Can I just check that these four films comprise the complete list of what I should have?:
1. Coffs Harbour.mov
2. Toodyay Shire.avi
3. Marion City.mov
4. Wyndham City.mov
Fascinating material John. I'm really impressed with the way the films have evolved from the Coffs Harbour film earlier in the year. Have you the stills that you mentioned of you and Annie filming? Best. Simon 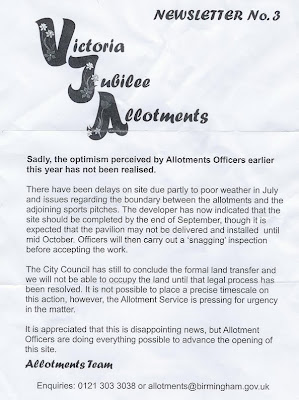 This 'newsletter' printed in 'cut-back' black instead of the colours of previous letters from ther allotments team was in my post when I got back to Handsworth. Extract from a piece I've written for the local Friends of the Earth October newsletter


'... Burdened by recession, the Council has born down heavily on its allotments budget – making cuts, according to the Birmingham Post, of 65%. Front line staff who provide excellent service to plot holders are under great pressure, yet here we have a legal agreement in place, at no cost to council taxpayers, to open the largest new allotment site in the UK since WW2. The problem is demonstrably at the highest level in the city. Simon Baddeley, Handsworth Allotments Information Group (HAIG) TO GET ON THE SHORT LIST FOR A PLOT ON THE VJA WHEN THEY BECOME AVAILABLE PHONE 0121 303 3038, e-mail: allotments@birmingham.gov.uk or complete a form on-line.'

* * *
...and tomorrow, Sunday, there'll be a crowd of people around the school in Ano Korakiana visiting the polling station for the Greek General Election. My knowledge of what the elections will mean isn't good. I suspect PASOK will win, given their pre-election poll lead but any new government will have horrendously difficult decisions to make given the political, social, educational and economic state of the Hellenic Republic - shared with other European economies, especially Spain and Italy. Last December the European Court of Justice gave three rulings against the Greek Ministry of Education for discriminating against non-Greek universities and colleges. Public debt is high and rising. George Papandreou's PASOK - if it succeeds in the election - will surely focus, as its Leader has promised, on corruption. Karamanlis tried hard, but it's a 'wicked problem', and he's struggled with a one seat majority. My hope is that there's a critical mass of ordinary Greek citizens who, even though they may have treated corruption as normal, want to change. We see many signs of this - particularly among Hellenic women in professional roles, as lawyers. doctors and accountants.
The Irish - second time round - self-confidence eroded by the end of their economic blooming, have voted 'yes' to the Lisbon Treaty. Note: Britain declared war on Germany on 3 September 1939 - just 70 years since the Nazis and and Soviets completed their invasion and division of Poland precipitating the crisis that, though I was unborn, and then just a baby and a child, has echoed through my life and the lives of so many others born in the 1940s. In my case it has made me an uncritical supporter of the European Union despite the unwieldy flaws of this messy diverse would-be super-state.
I also believe with Michel Foucault that governing yourself is no more nor less difficult than governing your household (in whatever form), and both endeavours are as tricky as governing a state. This was how I came to wrote Internal Polity.
It's why I was enthusiastic when we were heard a story about the way the Faiakon Demos (Δήμος Φαιάκων), with their offices in Ipsos, had responded to village residents' plea to the Mayor about a long running nuisance involving a neighbour's illegal dogs making life unbearable, barking and whining at all hours below their windows.

The Mayor, Michael Karras (Ο Δήμαρχος Φαιάκων, Μιχάλης Κάρρας) brought in an interpreter, listened sympathetically, and almost immediately sent two very efficient women environmental health officers to enforce the law - that you may not own more than two dogs and you may not leave them unattended on land separate from your residence. This decisive action would have been unrealistic a few years ago. Word of it has spread in the village.
* * * Sunday 4 Oct 1838 UK time: Greek election exit poll results: PASOK landslide win predicted, but the Greens with 2-3% of the vote get no parliamentary representation.

'The May Dance that was happening in the sun that day was first made up of a mob of fluttering females, all ready for what can happen as a result of going to dances.'

Read from a chapter in The Old Country at my stepfather's memorial service by his friend Cliff Michelmore ... and this is the email I've just had back from the Administrator of the SWFTA looking after Jack's films - not the one's I have, nor the ones published on DVD or posted on YouTube but original pre-production 16mm film plus sound tapes that he would have married to them and linked with a shed commentary:

Dear Simon. Many thanks for contacting SWFTA about the collection of Jack Hargreaves films that have been deposited with us. I know you spoke to my colleague Mike Brewis on Friday and I was delighted to hear all about it - I started work here in June and almost the first call I took was from a John Peters who was asking for a copy of the exploding bait box film on behalf of his friend, Richard Hill. At that time it seemed unlikely that we would make much headway with the request so it's very encouraging that so much progress has now been made.
However, there's still a certain amount of work to do before we can supply a DVD to Mr Hill, and I just wanted to let you know why. When Mr Peters first made contact, I explained that there were various reasons why it was difficult to work on his request. We are a charity with limited funding and only three staff members, and most of our time is necessarily taken up with commercial business activities. We receive a significant number of donated film collections throughout the year and our policy is to deal with these, when time allows, in the order in which they are received, and also one by one, to avoid any chance of collections being mixed up. And we would not consider releasing any copies of material from a collection until that entire collection had been properly assessed and logged. The position with the Jack Hargreaves collection was that it is very large, it is not material relating to the South West region, we had no idea who held the copyright and we had no named contact - and consequently it was not an item of any priority for us.
Mr Peters made it his business to trace the copyright holder, and we are extremely grateful that due to his efforts we are now in touch with you. Furthermore, after your conversation with Mike we now have a way of beginning to assess the collection. In view of this, and because we understand that Mr Hill is elderly and in poor health, we have decided to make an exception in this case, and to work on this single item from the collection. So far, we have found the item, but with no soundtrack. If we are able to locate the soundtrack, the work involved in marrying it up to the film and transfering the complete item to DVD will be a complex and time-consuming exercise because of the different media involved, and this work will have to wait its turn along with other less-urgent projects. We are keen to complete the DVD, but I'm sure you will understand why it might still take some time. I will of course keep Mr Hill informed of our progress.
In the meantime Mike has asked me to let you know that he has found a soundtrack referring to the woodcarving, and it confirms the carving was done by Mr Hill. As yet we have not found the film. We have also made an approximate count of the collection and we seem to have about 350 cans of film and several boxes of audio reels.
Many thanks again for getting in touch, and we look forward to keeping in contact about the collection in the future. Best wishes. Jennie Constable. Administrator, SWFTA, South West Film & Television Archive, Melville Building, Royal William Yard, Stonehouse, Plymouth PL1 3RP Tel: 01752 202650

**** Back to the future ~ 8 December '09: Lin and I were starting to clear things out of Amy's old bedroom when Lin found this carved fish. Richard Hill has told me that the Crucian carp above is not his work, so I'm wondering if this one - clearly a roach - is his, especially as on its reverse are signs of it having been mounted on another surface. I shall e-mail John Featherstone and John Peters to check as Richard doesn't do e-mails. (follow here and here)